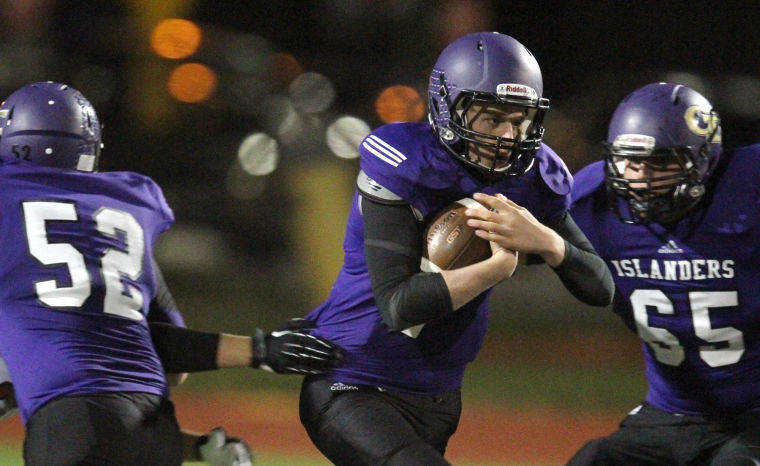 Grand Island's Pierce Almond protects the football as he rolls for some rushing yards.

Grand Island's Pierce Almond leads a group of 31 returning quarterbacks who threw for more than a 1000 yards a year ago in Nebraska prep football. The Islander standout was one of 5 Class A quarterbacks who passed for 2000+ yards in 2013. Almond connected for 19 touchdowns last season and led those 2000 yard gunslingers in completion percentage, hitting 65% of his tosses.

Perhaps the most impressive stat of all these QB's was compiled by Hemingford's Matthew Wood. Wood completed 69 of his 118 passes for 1,295 yards. Nearly HALF of his completions were for touchdowns. Wood had 33 touchdowns and more impressive yet was the fact that he was picked off only 3 times.

Amherst's Trey Taubenheim threw for 23 TDs and was intercepted only 3 times last season as a sophomore. We also had TWO freshman who passed for a thousand yards in the 8-Man ranks. Jacey Nutter of Sandhills-Thedford passed for 1,009 yards and 15 touchdowns while McCool Junction's Damon Kaliff racked up 1,297 yards and 18 passing Tds. Neither one of these lads probably didn't even have a driver's license yet. Interesting fact about Kaliff is that the 5-9, 186 pound QB/LB is now playing for Class B York. You may remember Damon's cousin Landon Kaliff who led the Dukes to the Class B state title game a year ago. The sophomore transfer from McCool checked in at 6-0, 200 pounds this fall and just may be the starting signal caller for super coach Glen Snodgrass, who is just simply one of the best in the business. And you will not get many arguments with that statement.

Not too many folks outside of GI knew a whole bunch about Pierce Almond as a quarterback, but #2 was a winner the 1st time he stepped on the field a season ago. You kind of wondered how he would operate as a field general with so many senior leader-types on that 2013 football team, but Almond fit the QB/Field General role like a glove.......a silk glove. All Pierce did was lead this never-give-up Islander squad to within a breath of playing for a state title in Lincoln. You could have sworn this guy was a senior the way he operated.

After the season ended a year ago, Islander fans as well as fans and sports scribes around the state, wondered how Almond would fare in 2014 with such heavy graduation losses. Well, that hasn't been determined as of yet, but the fact that Stu Pospisil of the Omaha World-Herald ranked the Islanders 4th in today's pre-season ratings tells you what the smart guys think of Pierce Almond.

Grand Island returns only 4 starters on offense and 4 on defense, but just the presence of this young man in an Islander uniform warrants a lofty rating in the eyes of a prep rater that knows his stuff.

Well friends, I don't do ratings, but I can tell you that GI head coach Jeff Tomlin and his splendid offensive coordinator Russ Harvey, will figure out how to use Pierce Almond to the absolute max.

Almond didn't rush for a ton of yards last season, 395 to be exact. His per carry average was only 3.27 a pop, but something tells me #2 is capable of ripping off a 1000 yard rushing season to go along with a 1000 yard plus passing campaign. If you've ever seen this kid on the basketball court, you know what an outstanding athlete he is. And you won't find a better family than the Almond crew. Keep close tabs on this young man though out this season if you like high school football. But no worries, if you don't the headlines at the top of the sports pages will.