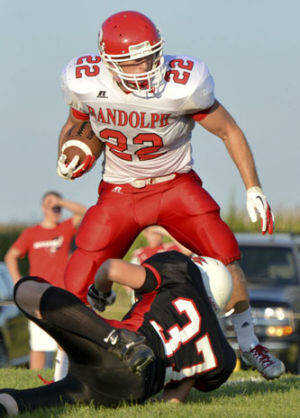 If you added the yardage of all 5 young men we feature today, the staggering total would be

7,441 yards. These dudes racked up the yards in 2013 should be a real kick to watch this fall. Oh, and by the way, the 2014 high school football season officially began when the clock struck midnight last night. So many people have been waiting a very long time for the clock and calender to signal the start of the Holy Season.

Let's look at these fabulous five. One youngster in the group and we spotlight him first.

Last season Anselmo-Merna had a young, but promising team that went 7-3 in 2012. On hand was a running back named Trent Geiser, who rambled for 1,636 yards as a sophomore and quarterback situation that was a little unsettled. Opening game Geiser rushes for 22 times for 72 yards but up steps Troy Gilligan, the sophomore, who completes 6 of 9 passes for 168 yards and runs 13 times for 108 and scores twice. The Coyotes whip South Loup 34-14. All is well. Not so fast my friends. The next week vs. Sandhills/Thedford, Geiser carries the ball 5 times for 24 yards and is lost for the season before he could carry it a 6th time. If Troy Gilligan the 10th grader felt pressure in the opener, he hadn't seen anything yet.

The rest is pleasant history for Anselmo-Merna because Gilligan went on to complete 66-140 passed for 1,281 yards and 13 Tds. He rushed for 1,329 yards on an usually unheard of 29 times a game and scored 22 times on the ground. As a defensive back Gilligan made 67 tackles, intercepted 3 passes and recovered 2 fumbles. He also returned punts and kick-offs, mowed and striped the field, washed the team uniforms and drove the bus to away games.....well, he returned the punts and kick-offs anyway.

Troy Gilligan is a natural at the QB position. He just has those instincts every coach hopes for. Gilligan demonstrated an uncanny knack for knowing what to do in a micro second. Impressive for a sophomore in his first year at calling signals. Whether he lines up in an empty backfield, has a couple of backs 3 yards either side of him, or whether he's under center, #22 is money at making good decisions. Football fast, elusive, and incredibly durable for a hundred forty pounds, Troy Gilligan is a worthy field general. And this year Trent Geiser returns for his senior season, giving the Coyotes one of the most, if not the most dangerous backfield in all of 8-man football.

This kid is just a do-it-all guy for the Longhorns. Most noticeable thing about Withrow is how strong and durable he is for 165 pounds. The kid carried the ball 25 times a game in 2013 and the tougher the opponent, the more carries for #21. Against one of the best defenses in C-2, Withrow carried 27 times for 172 yards as Kimball gave Blue Hill all it wanted in that 21-6 loss in the opening round of the playoffs. Jonathan is also a nice receiver out of that 'Horn backfield, hauling in 14 passes for an average of 12 a grab and 2 scores. On 3 occasions, QB Colton Stull pitched the ball back to Withrow, who then pulled up and threw a pass. He completed 2 of those, one for 40, the other for a 38 yard strike.

Nobody can accuse Kimball of not playing a competitive schedule having to knock heads with the likes of North Platte St. Pats, Cambridge, and Hershey. Withrow is already 8th in career rushing on Kimball's list and needs only 827 yards be be the all-time rushing leader. Any bets on that one?

Jonathan Withrow possesses very good foot speed and certainly has great vision. Not a plant and cut runner, #21 just kind of glides when he needs to change directions and tucks the ball and drags defenders with him. Withrow fumbled only 5 times in 226 carries and lost NOT ONE. On defense, he is a terrific strong safety, especially in pass coverage. Not too many receivers got past Withrow last season.

I think it's safe to say that this young man is one of the top backs in 11-man football in the Panhandle. Both he and Scottsbluff's Ty Benson are awfully sweet backs, but Withrow can just take that pounding and come back for more.

2013 was about as good as it gets for Kean and his Irish teammates. The Irish scored 757 points in 13 games on their way to a walk through the park Class D-2 State Championship march. Makes ya wonder if they couldn't have captured D-1. Falls City Sacred Heart looked like the glory days last season and Sawyer Kean just sat back and enjoyed it all.

1,534 yards and 34 touchdowns is pretty tough to duplicate, but Kean has all the tools and his coach is tough to beat (Doug Goltz). The Irish return only 2 starters on either side of the ball but it doesn't take much of a hole for Sawyer Kean to slip through for 6 points. Exceptionally fleet of foot, Kean is an intelligent runner who can get to the corner on a toss sweep in a hurry. Not a good idea to let him get a step past the defense because he's gone. Good receiver out of that single back offense, Sawyer may get a lot more carries than he did in 2013. Sacred Heart actually threw the ball more than usual last season, so it will be interesting if Goltz will lean on the run more this fall. Last season Kean only carried the ball 12 times a contest and averaged nearly 10 yards a pop. If Goltz does indeed decide to run that ball more, #21 will handle those chores just fine.

Oh my do I like this young man. Sonderup is short in stature, compact, blazing fast, and tough as nails. #22 will be going for 1000 yard season number 3 this fall. My wife's home town of Fullerton is back to playing tough, physical football and has a coach (Ryan Haughton) who knows his stuff. It didn't take long for the Warriors to let the world know they were for real a year ago. In the opening contest, they knocked off powerful Humphrey St. Francis convincingly 46-22. Fullerton has been good ever since.

The Warriors return 5 starters on each side of the ball this fall and Sonderup benefits from a very diversified offense run by a pretty smart man in Coach Haughton. Strangely, and a real shock to me, Garrett Sonderup gained many of his 1,559 yards right up the gut of the defense. Sonderup has 100 meter track speed but just didn't run outside that much when I saw him, although I know he had to get those numbers. St. Francis could attest to that after the opener last season. The kid is an outstanding wrestler and has such a low center of gravity he is difficult to tackle. If the defense is crowding the line and Sonderup gets a step behind, it's a dance to the end zone with defenders looking at his backside. Garrett Sonderup is 10 pounds of muscle heavier this year so the punch he packed a year ago will be magnified by that and then some. Ouch.

Garrett scored a bunch of touchdowns in 2013.....35 to be exact and it wouldn't surprise me to see him match or exceed that in 2014. There wasn't an all-state team that didn't have #22 in their backfield. Sonderup will have powerful 185 pound Seth Wetovick blocking for him at fullback and an exiting new quarterback in junior Will Meyer, who I think will be an all-stater as a linebacker. Tough customer! And we haven't even said anything about how dangerous Garrett Sonderup is on kick and punt returns. He took one back in that opener against HSF a year ago and nearly did the same with a punt return. Sonderup is also one of the best in 8-man football at following his blockers. Maybe thee best. And the southpaw might just pull up on a sweep and throw a pass more than once.

For as deep as Garrett lines up in the backfield (8 yards sometimes) he sure hits the scrimmage line in a whirlwind of a hurry and his dancing feet may rival Matson of McCook. Just so lightening fast. And on defense Sonderup is a sneaky player, coming up to make tackles when you least expect it. Great pass defender too. Such a valuable player for Fullerton, yet far from being a one man show.

One of my favorite running backs to watch for sure.........#22 is really, really good. And the stats for last season: 35 Tds, 2 passing Tds, 59 solo tackles on defense, 60 assisted, 4 forced fumbles, 3 recovered fumbles, and 1 interception. 25 yards per punt return and 1 TD. 14 kick returns with an average of 33 yards a return and 3 touchdowns. 2,328 all purpose yards. Nuff Said. See you on the sidelines, Garrett.

Mother of Mercy alive, where do I start with this man? Man with a capital "M" if you will. Right here and now I will vote Dylan Loberg "the man no defender wants to tackle" in 8-man football. This 195 pound bulldozer with 4.6 forty speed shed more tacklers in 2013 than any back I watched all of last season. Would-be tacklers just glanced off #22 like animated tacklers in a video game. Loberg may also have one of the finest spin moves in all of 8-man football too.

It's safe to say that Dylan Loberg had more yards after contact than anybody in 8-man football for sure. Another category almost nobody charts is one of my favorites......Self-Made Yards. These are yards not created by anything or anyone else but the ball carrier. Most are made beyond the line of scrimmage and Loberg would be the king of 8-man in this category too. And sure enough, the better teams he faced, the better he was. I'm talking about powerhouses like Howells-Dodge, Exeter-Milligan, and traditionally rough, tough defensive squads like BDS and McCool Junction. I'm telling you right now this kid could start for any school in Class A and gain a thousand yards if he ran behind offensive lines you see at Omaha North or Millard North. Randolph is a school with great football tradition and Loberg is not the 1st Cardinal player who could have started in the Metro in Class A.

Unfortunately, I lack the statistical information on Dylan Loberg that I have on Sonderup but this much is known. Loberg is after his 3rd straight 1000 yard rushing campaign and the terrible shame that exists in this deal is that this kid was on his way to a thousand yard season as a Freshman, but suffered a concussion and missed the final game of the season. He did end up with 870 yards and had he not been injured, Loberg may have been only the 4th runner in history to record four 1000 yard rushing seasons. Something tells me Dylan Loberg doesn't even think about that but his father and I certainly do.

Dylan Loberg unofficially has 3,510 yards rushing in his career going into his senior season and a genuine opportunity to join that 5000 Career Club. Randolph has been a playoff qualifier the previous 3 years while Loberg has been there being eliminated in the opening round the 1st two seasons. But last year the Cardinals won 2 games and advanced to the quarterfinals before being eliminated by eventual champion Exeter-Milligan. In that game Loberg ran for 202 yards and scored on runs of 45 and 55 yards.

If Randolph has a decent number of lineman returning and can find a QB, this could be a huge year in 2014. I certainly wouldn't care to be a young quarterback staring across the line with linebackers Dylan Loberg and Seth Lackas glaring at me. Keep an eye on this team, especially #22. He's a sure fire all-state player at RB or LB.