A Most Unlikely and Remarkable Reversal of Roles. 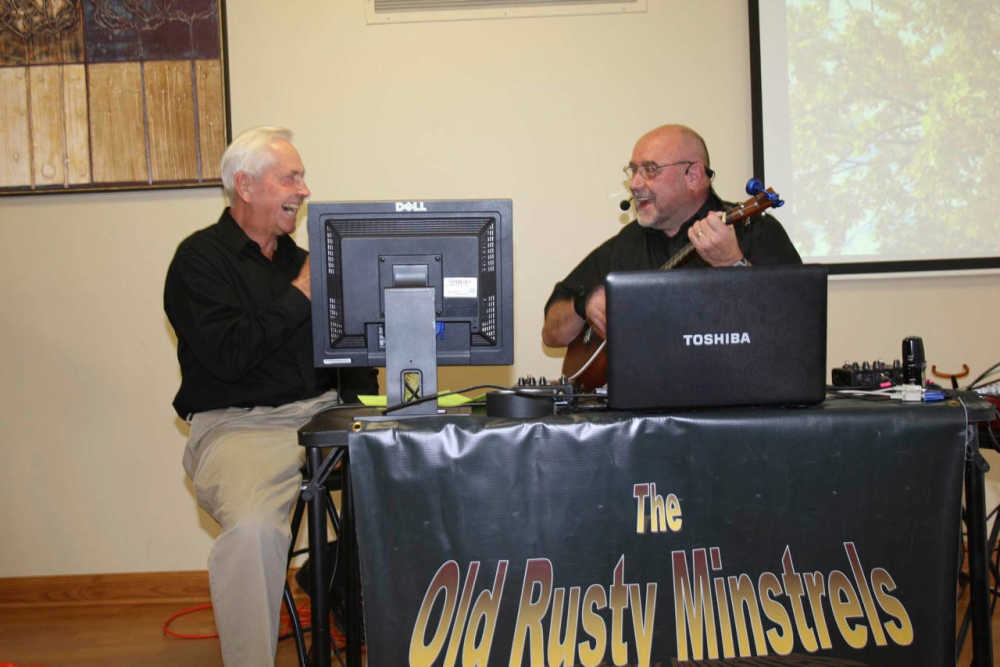 A couple of months ago I was in the press box at Burke high school in Omaha covering the State Track Meet. My phone rings and on the other side is a friendly voice from the past. It's none other than former World-Herald Prep sports editor, outdoor writer, and superb fishing guide Larry Porter. Long time, no see. Larry starts the conversation by saying "Isn't this different. You're covering the state track meet and I'm in Grand Island............playing a couple of gigs."

Let's back things up and fill in a few blanks here. The majority of people in my life know I have been playing drums for years. Started in 1963. Strangely enough, became interested when I heard the haunting cadence the drummers were playing during the funeral march for President John F. Kennedy. I've been fortunate enough during my years to play some great gigs with some top notch players. The Johnny Carson Show, Jerry Lewis Telethons for the Love Network, Bill Cosby, Rosemary Clooney, Leonard Nimoy, Jerry Vale etc. I still practice a couple of hours a day. Have since I started....you kind of get the picture.

After I retired, I did something I've always wanted to do and that's write about high school sports. So, I masquerade as a sports writer these days, never claiming to be a journalist or English major. Just want to promote high school sports and the kids involved and I love it.

So, enter Larry Porter. I started my 1000 Yard Club in 1975 and Larry took the reins as Prep Editor for the Omaha World-Herald from Conde Sargent the very next year. From day one, I loved Larry Porter's writing style. He breathed life into an otherwise "just report the facts" type of writing most all Metro newspapers demand. Larry gave Nebraska high school sports a state-wide pulse with his insight and colorful language. Porter's words gave you the impression he was talking to you face to face. He gave you the facts but could make you laugh or bring you to tears with his human interest view of a situation. Larry Porter also gave my 1000 Yard Club it's first state-wide recognition when he published the list in the World-Herald. A big day for the athletes that deserved the publicity. It was a milestone in my life.

Porter covered high school sports from 1976 to 1990 and would run across our band from time to time. I think he liked my father's saxophone stylings and our music a bit. Even mentioned us a time or two in his articles. Our family and Larry became close friends during that period. But in 1990 when longtime WH Outdoor writer Gene Hornbeck retired, Larry broke my heart by taking "Hornbuckle's" gig. It seemed like a piece of my life was gone when he stopped covering high school sports. The man they call Porter was my journalist hero, you see.

I lost track of Larry for a long, long time after that. Deep down I think the Outdoor writing gig was always the thing he wanted and he was good at his craft. In addition, Larry was one of the most knowledgeable fishing experts around, especially Walleye. Finally after 40 years of successful writing for the Omaha newspaper, Larry Porter called it quits, retiring on April 1, 2007. Almost immediately, he began being an on-the-water fishing guide at Lake Oahe, on the Missouri River in Pierre, SD. Larry joined his long time buddy Kent Hutchensen, who had been a guide up there for 35 years.

Dream job at the World-Herald for the last 16 years of his working life and now another dream gig being a fishing guide, doing fishing clinics, and livin' the dream, man. Larry was even on the In-Fisherman Professional Walleye trail tourney circuit for 10 years. Dream retirement for sure.

Now comes the twist and the turn in the road. Porter apparently worked with a man named Bill Hord at the World-Herald for years. I recall reading Hord's articles now and then....good journalist. Anyway, after Hord retired he decided to dabble with a software program called Band-In-a Box. This was just 4 years ago. Hord liked to sing and strum a little guitar, don't you see. Bill had the idea that he and another collegue might get this thing rolling and maybe play a few little gigs here and there. You know, retirement community lodges, places like that.

Apparently one day Hord and Larry were gathered together someplace to honor a World-Herald employee who was celebrating a birthday. Bill was standing right next to Porter when Larry belted out a verse of "happy birthday" in a baritone voice that must have had Hord thinking "Dude, where have you been hiding those beautiful pipes all these years!"

Hord persuaded Larry to come over to his house the next day and the two proceeded to sing tunes for the better part of 7 hours. Larry Porter was "hooked", pardon the pun, and the rest is history.

Now we flash back to the State track meet. Larry filled me on on all of the things I just told you and invited me to hear the traveling duo.......The Old Rusty Minstrels. Porter told me they would be back in the area around July. I wondered if he would really call, but Saturday after teaching a drum lesson, sure enough Larry called and told me they had a morning gig in Aurora and an early evening gig in Central City. I still had a difficult time grasping this entire scenario. When and how did this journalist hero of mine learn how to sing. Why did he not ever mention that to me when he came to one of our band gigs? Well, curiosity was killing me. I probably would have driven 2 hours to see these two former writers-turned-musicians.

Larry and his buddy Bill Hord were playing the short hour gig at the Cottonwood Estates, an assisted living place on the east end of Central City. When I walked in, I could not believe what I heard. These guys sounded like pros. Honestly, the first thing that entered my mind when I heard Larry sing was "this guy is the star of the show." Don't get me wrong, Hord sings well and is the master of the show, but Porter's voice projected like a seasoned singer. He nailed every single note he uttered........all 60 minutes. The presentation was slick, well put together, and I felt as though I was taking in a well polished show that had been around for years. On one side it felt like I was in a state of shock, but on the other, I just knew Larry Porter would be outstanding at his new craft.

Still unbelievable when you think about it. I was really convinced Bill Hord and Larry Porter were "genuine" road musicians when they were packed up, loaded and ready to hit the road in less than 30 minutes after the final note. My dad, Bobby Mills Sr. would have been proud. "Play the gig, sell out like crazy, leave 'em hungry for more, get the money, pack up, and hit the road baby." Probably solved most of the world problems on the way home to boot. The Old Rusty Minstrels had it down to a tee. Playing an average of 4 gigs a week too!

I had trouble sleeping last night. Couldn't believe the role reversals. There is one difference however. I started out, still am a drummer, now turned sports writer......still a wannabee sports writer though. On the other hand, Larry Porter was a top notch sports writer and now a professional singer, and a good one.......no wannabee there. He must be serious to give up his dream gig as a fishing guide. And after hearing him perform, I can fully understand why.

Oh, one more thing, Larry Porter. When the Old Rusty Minstrels get that Vegas gig........I know a drummer who would love to play your charts if you need an extra musician.