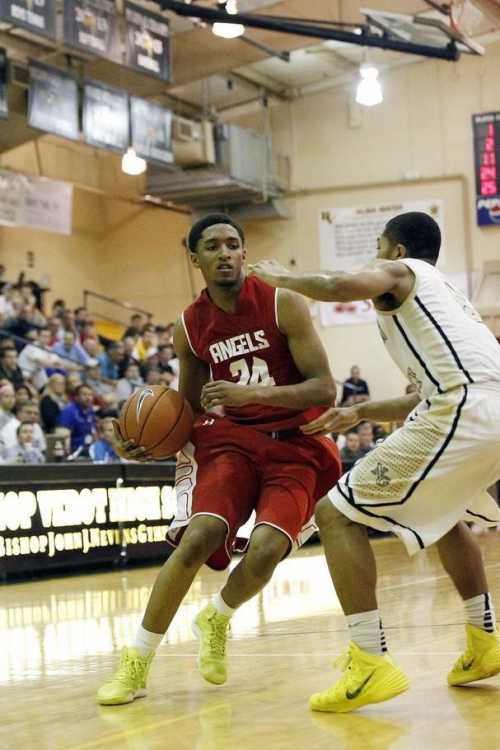 Denver East's Dominique Collier (#24) in action at the City of Palms Tournament in Florida.

We have arrived to the final two games of this 7th edition of the Heartland Hoops Classic and once again Nebraska basketball power Omaha Central will be paired with an out-state power. The Eagles will face a formidable Class 5A Colorado high school team in Denver East in the featured game of the day. But before we spotlight that dandy, how about a look at Game 7 which sends Kearney to the Events Center to meet Class A's #5 rated Norfolk.

Around Christmas time I thought maybe Tino Martinez had made a blunder scheduling Kearney against Norfolk in the co-featured game of the day. You see, at that time the Bearcats were 1-10, with their only win coming against a Class B Lexington squad. But since that time the Bearcats have gone 8-2 with the lone losses coming in a 2 point loss to Creighton Prep at the Bird Cage and a single point setback to Lincoln North Star. Excluding an opening blowout loss to Bellevue West, the biggest spread in a loss for this Kearney team was 10 points, even during that dismal 1-10 start. Kearney even stayed within 9 of Norfolk in the GNAC tournament smack dab in the middle of that losing streak.

The current Kearney squad is nowhere near the kind of team that started 1-10. This group has started to jell and is capable of beating any Class A team in the state on a given night. Nobody talks Kearney Bearcat basketball without mentioning Damien Austen. The 5-6 guard runs the show and is a magician on the hardwood with his high energy play and Harlem Globetrotter type moves. Austen can dribble with precision, drain the trey, dish off to an open player or drive the lane with a twisting, turning layup. Damien leads the team in scoring, but 6-2 junior Peyton Pocock (football QB) or junior big man Brian Arp follow close behind in scoring. And when Arp gets in foul trouble, 6-2 junior Brady Johnson can come off the bench and score 20 for the 'Cats. By the way, Brian Arp is a welcome sight to Kearney hoops, having missed all of last season with a knee injury. This team is clicking on all cylinders right now and will be ready for Norfolk Saturday night at 7:30.

Norfolk is one of the state's best high school basketball teams and is overflowing with deeply talented young players. Coach Ben Ries was a rare freshman starter on a Class A squad when he played for Dave Oman at Norfolk High, so he naturally believes that his players are measured by talent, not what grade they are in. Just so happens the Panthers have three talented freshman in 6-2 Lane McCallum, 6-5 Logan Strom, and 5-11 Travis Larson. Matter of fact, Strom is the 2nd leading scorer on this Norfolk team with 11.1ppg. All 3 of these young guys are playing like they've had 2 years varsity experience.

The Panthers returned 4 starters from last year's 16-9 team and have not disappointed thus far in 2013/14. 6-8 college prospect Tyler Hagedorn is leading the Panther scoring parade with 17.1ppg and 5 boards a game and is only a junior. After Stroms' 11ppg, sophomore 6-0 Brian Villalpando adds 9.3ppg and is a superb ball handler and fierce defensive player. 6-4 Cory Reestman and 6-3 Taylor Reedy are also starters and contribute heavily on both sides of the court.

Norfolk averages 65 points a game while holding the opposition to 52. The Panthers only 2 losses came at the hands of 16-5 Omaha Westside squad and 61-59 overtime heartbreaker to Lincoln Southeast. This Norfolk basketball team will be very, very good for the next few years at least.

Well, this baby is the headliner of this year's Heartland Hoop Classic and shapes up to be a perfect way to cap off a splendid day of high school basketball. The Colorado invader comes to Grand Island featuring two Divison 1 signees in 6'2 Creighton Bluejay recruit Ronnie Harrell and 6-2 Dominique Collier, who is headed to Colorado University to be a Buffalo. Omaha Central will showcase a well balanced attack led by 3 players who average double figures in the scoring column.

Denver East's Angels have been devils to their opponents this season, averaging 76 point a contest. East's numbers are big time in almost every category. The Angels average 28 rebounds, 14 assists, 11 steals, and 5 blocks each outing. Dominique Collier scores 23.6ppg while connecting 52% of his 2 point shots, 38% from beyond the arc, and a sparkling 85% from the charity stripe. Collier is white hot coming into this contest, having scored 30+ in 4 of his last 6 games including a 40 point outburst against Denver North 3 weeks ago.

Ronnie Harrell is East's 2nd leading scorer with 16.6ppg and 6 boards, while 6-3 senior Javon Griffen (12.6ppg) and Brian Carey (10.7) round out the Angels other double digit scorers. Denver East is not a great 3 point shooting team, but is hitting their 2 point shots at a torrid 58% for the year.

Denver East's only 2 setbacks were to Philadelphia's Neumann-Goretti (90-61), Pennsylvania's 3rd rated team, and Bellflower (Los Angeles suburb) St. John Bosco (75-65) a 15th rated California school. Both of these losses came at the prestigious City of Palms tournament in Florida over the holidays. Coach Rudy Carey has been the head man at Denver East for the past 21 seasons and both his boys and the Denver East girls hoops team are consistently ranked near the top of Colorado's 5A class, the state's largest class.

Omaha Central is not the nearly invincible team they were a year ago, but before you get the Kleenex out to wipe away the tears, the Eagles are doing just fine, thank you. Tre'Shawn Thurman, a player you remember from a year ago, is leading the way for Central this season with 20.7ppg and 6 rebounds. Jarek Coles follows at 12ppg, then Austin McGaugh with 10.3. The Eagles hit actually half of their 2 point tries. They do not launch the 3 like a year ago, but Thurman and Cole are the main source for those, hitting 31% beyond the three point line.

Omaha Central is still beating teams by a 60-48 average and can still obviously play defense. The Eagles 3 losses have come at the hands of #1 rated Omaha Benson twice (59-64 and 59-71) and Westside (51-58). Omaha Central suffered a rare pair of weekend losses last weekend but have winless Bellevue East Thursday to get ready for Denver East.

I have a feeling the Eagles will remember that magic night a year ago at the Events Center when they knocked off national power Oak Hill Academy in front of a sellout crowd of 6,000 pro-Eagle fans. You can bet Central will bring their best game face to this baby.

Tomorrow, the probable starting lineups and season records for all teams.