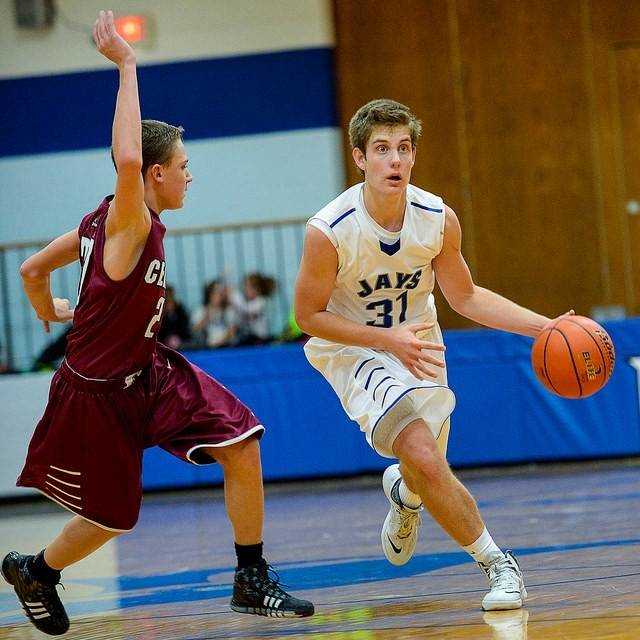 They may not come under the titles of Fabulous Freshman or Sensational Sophomores, but this year's class of young male talent has coaches, as well as fans across Nebraska seeing visions of March Madness in Lincoln. I have seen more young talent this season than I can recall in a long time.

No, these young players are not Division 1 recruits by any means, but certainly represent puzzle pieces that make their respective teams very good the next few seasons. Let's face it, no matter what class you play in, any young man that can be a starter as a freshman or a sophomore on a team with a 500 or better record has to be pretty solid.

The following list of young guys that I have either seen (live or on film) that have made their presence known in the current 2013/2014 season. This list includes boys only for the simple fact that girls develop much faster than guys and it certainly isn't out of the ordinary to see a freshman or sophomore girl not only leading their team, but landing a D-1 scholarship (see Minden freshman Taylor Kissinger).

The list of names you'll be hearing about in the near future:

*Brooks Asher, Dayton Sealey, Zack Kitten, all sophomores - Hastings St. Cecilia -- Asher and Sealey both start for the Bluehawks and Brooks Asher often leads St. Cecilia in scoring. These 3 have this Bluehawk team in the thick of the C-2 title picture.

*Logan Strom (6-5 freshman), Lane McCallum (6-2 freshman) and Travis Larson (5-11 freshman) -- Norfolk -- These 3 rookies have played a big role in the 15-2, 4th rated Panther's successful run so far this season. In fact, Strom averages 11ppg and pulls down 4 boards an outing.

*Brandon Villalpando (6-0 sophomore) and Gunnar Fuelberth (6-0 sophomore) -- Norfolk -- Villalpando plays well beyond his years as a starter on this team. Shooting 45% from 2 point land, 38% from beyond the arc and 74% from the charity stripe. Pretty good assumption the Panthers will be in contention the next 4 years. Head coach Ben Ries, who started as a freshman in an era when it was almost unheard of in Class A, judges his players on talent, not on age.

*Todd Honas (5-11 sophomore), Austin Allen (6-5 freshman) and Tommy Leininger (5-11 freshman) -- Aurora -- ALL three of these gentlemen are starters for Aurora. Honas is a wizard as a ball handler and can drain the trey or drive to the hoop. The Huskies may only be 8-8 right now but wait until next season.......and the year after that.

*Cody Mroczek (6-4 freshman) and Dalton Taylor (6-0 freshman) -- Columbus Scotus -- These 2 players have already helped vault the 'Rocks to the number one C-1 ranking this season. The freshman class at Scotus may be the group that leads them to the promised land.

*Ben Simons (5-11 soph) and John Ruzicka (6-2 freshman) -- Wahoo -- Simons is a starter and can play right now while Ruzicka will improve as time goes on. The Warriors are contenders for the C-1 title right now.

*David Englehaupt (6-4) and Matt Miller (6-4) both sophomores -- Norfolk Catholic -- Yes, the Knights have been a roller coaster team this year but their schedule has been murderous. Both of these guys will make Catholic contender this year and the next 2 years.

*Jake Teichmeier (5-11) - Ravenna - This kid has it all. Plays like a seasoned veteran and handles the ball like a senior. Dribble drive is mind boggling.

*Wyatt Pankowski (6-3), Quentin Baxter (6-6), John Pappas (6-6) - Bridgeport - Pankowski averages 9ppg and 6 boards, Baxter scores 10a game and pulls down 3 rebounds per. Pappas averages 4 and 4 per outing. Pankowski was a 1000 yard man in football. This Bridgeport team is GOOD.

*Wanjang Tot and Noah Fant-Omaha Burke - Simply one of the best frontcourt tandems in the Metro. These dudes can manage the paint.

*Garrett Sittner-Adams Central - He and David Bohlen make a fearsome young duo frontcourt for the Patriots.

*Dillon Hernandez-Scottsbluff - Ditto for the 5-10 Hernandez.

*Jared Bubak-Lincoln Christian - 6-4 soph will be leaned on next two seasons. Huge build.

*Triston Farley-Wilcox-Hildreth - 6 foot 2 inch rebounding machine for Wil-Hill. 9ppg, 10 boards and has 3 double/doubles this season for the 13-2 boys from 404 Sapp Street in Wilcox.

*JJ Schulz - York - 5-11 sophomore has two of the best hands in football and basketball. Quick as a wink.,

*Landon Zarybnicky - Beatrice - Tremendous off the bench for the 14-1 Orangeman. Can score when needed.

*Zack Westfall-Bennington - Hiscock's 6-6 buddy is a steady force off the bench.

*Zach Bussard-Papillion LV South - 6-5 sophomore may hit double/doubles on a regular basis before it's all said and done. 6-10 Titans are a young team with only 2 seniors.

*Cory Ponds-Boys Town - 6-5 forward is one of C-1's most dangerous players, averaging 17ppg.

*Kyle Sperl-Stanton - You'll be hearing more about this 6 footer in the future. Scored 21 against Boone Central/NG.

*Sturgis Hanson-Axtell - 6-4 Hanson may be a force in the future. Wonder if he's a biker?