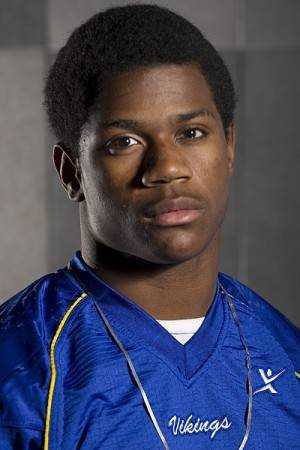 Omaha North's junior running back Calvin Strong has rushed where only three others have gone in the entire history of Nebraska high school football. The Viking phenom has run for an astounding 2,791 yards in 12 games this season. With one more game to go in 2013, Strong is within 175 yards of becoming the most prolific running back in Nebraska prep football history as far as a single season rushing total is concerned.

Better not leave out Clinton Childs (Omaha North), Kenton Keith (Omaha Benson), and we haven't even began to touch on the 8-Man all-stars.

Is the picture becoming clearer by the minute? The 172 pound Calvin Strong has probably not even reached his full potential and is already in position to become the single season king of all the backs that ever were anybody in a single season in this state, yards wise. Mind boggling.

Calvin Strong is a combination of explosive, elusive, powerful, shake and bake back and break-away speed. Built low to the ground, the 5-8 fireball can execute multiple moves on a single defender if needed. In open spaces, I'm wondering if the kid has ever been tackled one on one? And the amazing thing is that Strong runs inside......a lot. Last Friday when Omaha North came to Grand Island, I watched this young man from 5:30 all the way through the game and far after. Perched on the Viking sidelines with the view of a coach, I saw Calvin Strong run for 214 yards on 39 carries. Most of these were inside handoffs. The kid took some vicious hits by the GI defenders. I'm calculating that in those 39 carries, he probably absorbed at least a hundred solid hits and likely more than 125 bangs when it was all said and done. On the winning 17 yard touchdown run, I know 4 Islanders had a good shot at Strong and had hands on him. Not one time during the game did I see Strong winded except after the final TD when he fell to the ground on his way off the field with a simple cramp. After the game it was difficult to tell if Strong was even tired.

Come next Tuesday around 10:00 we will know if Calvin Strong has run into Nebraska single season rushing history. Here are the three running backs that still remain ahead of Strong:

Strong passed 5 others during the Grand Island game and needs only 36 yards to go by Gilbert, 59 to surpass Uhlir's total of 2,849, and 175 big ones to pass Corey Eikmeier. Both Eikmeier and Gilbert were 8-Man runners, Uhlir played the 11-Man game.

The closest Class A back to Strong's current total of 2,791 yards is Millard North's John McCardle who rushed for 2,355 yards in 2002.

How many eyes will be on Calvin Strong next week in the Class A finals? I'll guarantee 11 Omaha Westside players will be taking aim for sure. And I can also almost guarantee Calvin Strong would take an Omaha North State Championship over a single season rushing record.