Islanders answer every Bellevue West challenge in a 35-27 playoff win. 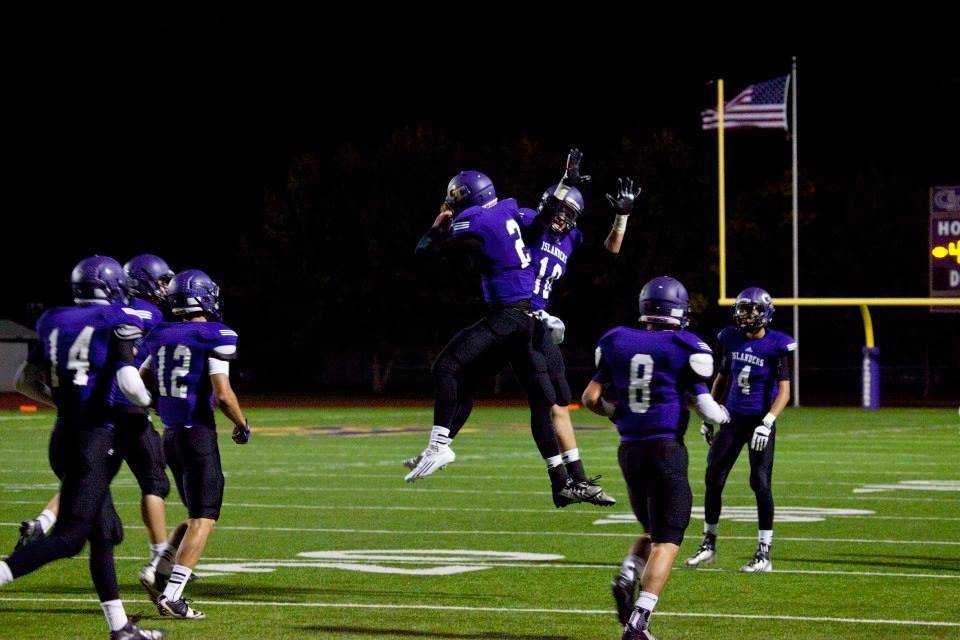 I saw Grand Island play a football game last night. It was the first time I had the opportunity to watch this 2013 version of Jeff Tomlin's Islanders. They were small. They were fast. They were resilient. They were everywhere, and they were good.....very good. First year head coach Michael Huffman brought his high flying Thunderbirds to G.I's Memorial Stadium for a first round playoff game. Huffman took over the Bell. West program a year after my old friend John Faiman passed away suddenly.

Young Coach Huffman had the Thunderbirds 12 points away from an undefeated record this fall. This team knocked off number one Omaha North 2 weeks ago, and suffered 1 point losses to a high flying Millard North squad and a talented Omaha Burke team. The T-Birds possess two of the top receivers in the entire state and a gun slinging quarterback.

And, after all, Grand Island's only only trip to the Metro resulted in a crushing 45-13 defeat to a salty Omaha Westside team. Despite winning the other 8 games on it's schedule, the best team GI had beaten sported a 5-4 record. The "football experts" were spewing comments like "their DB's will never stay with wide outs C.J. Johnson and Malik Hluchoweckyj. After all Johnson, the son of former Husker Clester Johnson, came in leading the state in receiving with 1,253 yards and 17 TDs.

Hluchoweckyj (pronounced Huh-Lutch-Uh-Wekkee) came in with 683 receiving and is a 6-10 high jumper. The "Fake Clester Johnson" on Twitter had tormented G.I. all week on twitter.

Well, you know something. I don't think the Islanders believed all that talk.

All week Grand Island head coach Jeff Tomlin stated that he liked this match up. His Islanders could match strides with these mighty Thunderbirds, he stated. The man has been right before. Many times in the past. Tomlin's no sunshine pumper when it's not warranted. The man's a realist and takes the rap when his troops suffer a loss.

You know something? Coach Tomlin must have known what he was talking about when all was said and done last evening.

The wind howled all day long in GI and many wondered if it would ground the vaunted Bell West aeriel game. The Thunderbirds have twice the passing yardage than rushing. But Grand Island passes too. Most of the time the thing that is most effected by strong winds.... the punting game.

The phase of the passing game most affected is when the offense has a tailing wind. Many fine high school quarterbacks find themselves over throwing their targets with the wind at their backs.

But remember, if it bothers one QB, the opposing quarterback has to fight the same problems. On this Friday night I find it difficult to believe the devil winds affected either QB.

The Thunderbirds struck first on their 2nd possession, using mostly the ground game. Good news or bad news? Nobody had time to contemplate that question because the Islanders answered with the Bell West student section still hooting following their opening score. Andrew Rojas fielded the ensuing kick off at his own 30 and jitterbugged his way, weaving in and out of the T-Bird kick coverage 70 yards for a score. Rojas left 'em grabbing nothing but air.

On the next Bellevue West possession, Clester Johnson caught his first pass and immediately coughed it up and the Islanders recovered. GI couldn't convert and the teams traded possessions until Thunderbird QB Brad Brazeal absorbed a monster hit and lost the football at the Islander 47 yard line. Grand Island then decided to play trick or treat one day after Halloween. On 1st down, quarterback Pierce Almond took the snap, started right, then tossed the ball back to Trevor Wojtalewicz running the the opposite direction. Trevor, who just happens to be a QB, pulled up short of the line of scrimmage and lofted a perfect pass to a streaking Seth Roberg. Hello trick, good-bye Thunderbird defense.....47 yard TD strike. That put GI up 14-7 and the score held up until halftime......But.....right before the half, Bell West got the ball with :19.6 seconds left. Brazeal uncorked a 41 yard pass to a streaking Clester Johnson. 1st and goal at the 6 with 11 ticks left in the half. Brazeal then fired a pass with a lot of mustard on it, but linebacker Rodrigo Venegas stepped in front of the receiver and picked off the would-be TD pass.

Grand Island nearly made it look easy on the opening drive of the 2nd half. The Islanders took it 64 yards in 11 plays. Rojas scooted in from the 11 yard line to cap the 3 minute 58 second drive. A 21-7 lead at the time may have looked good to some, but on this night.....not safe. Bellevue West caught the wind at their back and scored twice before the 3rd quarter was history. 21-21 all at the end of three....we had a ball game.

The Islanders had the ball following the last BW touchdown to begin the 4th and money quarter.

Grand Island drove it all the way to the Bellevue West 13 yard line, the key play being a pretty 31 yard completion from Almond to senior Ben Witkowski. The 155 pound speedster had just returned to the Islander lineup after missing 5 games with a broken collarbone. But on the very next play, hard running Jake Mayer took a jarring hit at the 7 yard line and Bell West recovered the fumble caused by the collision. The swarming GI defense stuffed the Thunderbirds on 3 consecutive plays for no gains. Forced to punt from their own end zone into the teeth of a now stronger wind, the BW punt hung and dropped on the 35 and took an Islander bounce back to the Thunderbird 25. Six plays later Pierce Almond nailed Ben Witkowski, who had snuck into the end zone from his WR slot on the right side. Witkowski was so alone, he could have waived to the crowd before catching the pass. 28-21 Islanders....6:27 left.

Here we go. The Thunderbirds marched the ball from their own 20, took 1 minute 56 seconds, and scored on a 19 yard pass to RB Cole Patterson. Kick in Achilles Heal. Bellevue West had dropped 1 point games to Millard North and Omaha Burke because of missed extra points. The "Heal" reared it's ugly head on the 'Birds point after when a bad snap forced the holder, Brennan Cascio into a run left. The swarming Islander "D" stopped Cascio 6 inches short of the goal line.

Fleet footed Braden Knuth put the Islanders in great field position at the Islander 49 after a sparkling kick return. With the strong wind at their back, GI was stopped cold, but unleashed a booming punt that pinned Bellveue West back on their own 9 yard line.

The Thunderbirds were stuffed when 215 pound Grant Bedner stood up QB Brad Brazeal and drilled him for a 2 yard loss. Facing a 2nd and 16 at their own 17, the blond BW signal caller fired a perfect pass to Malik Hluchoweckyj but Lucas Van Wie came out of nowhere to break it up. The Thunderbirds had no choice but to go on a 4th and 16, the clock showing 1:28. A Brazeal pass was overthrown and the Islanders had it first and 10 at the 16.

With only 1:18 remaining, Bellevue West did something I have never witnessed in 50 years of watching high school football. On Grand Island's 1st play, Coach Mike Huffman instructed his defense to concede a touchdown to the Islanders on that first play so they (GI) would'nt just run the clock out. Andrew Rojas, being the competitor he is, took the pitch and did what he is supposed to do......take the ball to the end zone.

So.......Islanders lead 35-27 with the clock reading 1:08. Surely this baby was in the books. Think again. After the ensuing kick sailed into the end zone, the Thunderbirds has the ball on their own 20. Here is the sequence of plays:

On the final play of the game it was a one-on-one jumping contest between Bellevue West's Clester Johnson and Grand Island's Trevor Wojtalewicz. On a play frozen in time, Wojtalewicz leaps high in the air and out jumps the Division One prospect for the interception........game over.

These Islanders answered nearly every call when they needed to. Outgained by a margin of 216 yards, the Islanders found ways to overcome the huge defecit. GI's defense forced hurried passes, blanketed receivers, and caused fumbles. Jeff Tomlin took advantage of the wind perfectly and the Islanders seemed to be everywhere on defense. Swarm to ball and tackle. Have the will to win. Answer every call, right down to the final play.

Now these Islanders will travel to Omaha once again, this time to face Omaha Burke. The Bulldogs have beaten then number 1 Millard West, defending champ Millard North, a 6-3 Omaha Central, and Bellevue West. Their only losses coming to a pair of 7-3 teams, Papillion LV, Creighton Prep, and 8-1 Omaha North. If you like score comparisons, chew on this one.

.......but something tells me these Islanders don't put much stock in score comaprisons. In all liklihood they don't read the papers that tell how spectacular the Bellevue West receivers are, and believe me.....they are outstanding. The only thing this 2013 version of Jeff Tomlin's Islanders do is what they do. Play hard, swarm to the ball on defense, and believe they can win. No stars on this team. Just one well oiled unit. Maybe their motto should be "NO "I" in Team. They just take 'em one at a time no matter who they are. That's what it takes to reach Lincoln.