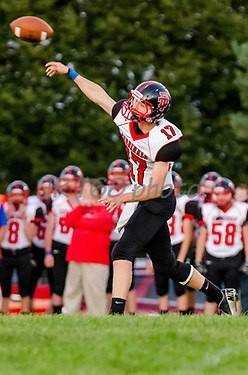 C-2's number one Doniphan-Trumbull and #10 Sutton traded punches like a couple of heavyweight prize fighters for all 48 minutes of a colassial C-2 football game tonight. Just as most imagined, the team that scored last would get the final word in this long anticipated match-up. Cardinal quarterback Riley Wilfong found 6-4 wide reciever Creighton Buhr for a 5 yard go ahead touchdown with 4:23 left in the contest then held off a furious Sutton rally to claim a 34-30 victory.

It was sweet revenge for Doniphan-Trumbull who suffered two losses to Sutton a year ago, one of which was a deflating, season ending 36-18 semi final playoff loss. The Mustangs who suffered the loss of their entire offensive line, fought like the state runner-ups they were in 2012 and nearly pulled off the come from behind win. But in the end it was too much Jordan Slough and Riley Wiltfong that sealed the fate for Sutton.

The way the game began, it looked like it might be a case of the first one to 50 wins. Sutton recovered their opening onside kick, broke Noah Johnson loose on a 33 yard sweep around the left side, then sent all-state QB Cole Wiseman in for a 2 yard TD run with only a minute 56 seconds into the game. Johnson ran in the 2 point conversion and just like that the Mustangs had an 8-0 lead. That lead lasted less than one minute. One Doniphan-Trumbull's first scrimmage play, all-state running back Jordan Slough slashed through the middle, cut outside and rambled 61 yards to the Sutton 6 yard line. After a 1 yard loss, Slough blasted in from 7 for a Cardinal score. Slough's 2 point try failed and with the game less Sutton led 8-6.

It took only six plays for the Mustangs to pad their lead. Fullback Noah Johnson again took a pitch from Wiseman on the right side and skirted 52 yards for a touchdown. The pass conversion failed but the Mustangs had a 14-6 lead with 6:11 left in the opening quarter. One possession later, D-T's Riley Wiltfong picked off a Cole Wiseman aerial and returned it to the Sutton 24. Five plays later Jordan Slough put the ball in the end zone from a yard out. Wiltfong tossed a pass to Johnny Gomez for the 2 point conversion and things were all square at 14 with 1:46 left in the first.

Defenses tightened up in the second quarter but Doniphan-Trumbull's Lorenzo Williams pirated a Wiseman pass and QB Riley Wiltfong began to take apart Sutton's defense with his legs. The slick senior reeled off runs of 34 and 22 yards on option plays with Sutton covering Slough on the pitch. Wiltfong hit paydirt from 7 yards out with 5:34 left in the 2nd quarter to take a 20-14 halftime lead. At halftime, there were more interceptions in the football game than pass completions. Each team had one on target pass, while D-T suffered 2 interceptions. Sutton had one pass picked off.

Doniphan-Trumbull returned the favor on the second half kick-off by recovering the onside kick but couldn't convert. After holding Sutton on their 1st possession of the second half, the Cardinals turned to Slough once again. The phenomenal runner ripped off a 22 yard run then took a handoff and disappeared into a mass of Sutton defenders. When everyone thought the play was over, Slough slipped out of the pile and sprinted 21 yards for another highlight reel touchdown run. With 7:26 left in the 3rd, Doniphan-Trumbull stretched the lead to 26-14 and you wondered if Sutton would bounce back with their young line that saw 3 sophomore and one freshman starter in the trenches. That question was answered with a minute and a half left in the 3rd. Facing a 4th down and 14 at the Cardinal 29 yard line, Cole Wiseman rolled out and spotted Noah Johnson and nailed him with a sweet 29 yard TD pass. Johnson, who had a huge night, ran in the 2 point extra to cut D-T's lead to 26-22.

Sutton's Cole Wiseman took matters into his own hands in the 4th quarter, running for tough yards time after time. The outstanding athlete finished off a fine Mustang drive by scoring on a 20 yard run at the 8:30 second mark of the 4th quarter. Wiseman then connected with Trae Ramer for the 2 point conversion and Sutton forged back on top 30-26.

Doniphan-Trumbull again answered the bell with a great 65 yard drive culminated by a scrambling 5 yard touchdown pass from Riley Wiltfong to Creighton Buhr. Zach McNally caught a Wiltfong pass for the 2 point X-tra and Doniphan-Trumbull had a 34-30 lead but had to withstand one more Sutton surge.

The Mustangs really had excellent field position on the games closing drive. Starting on their own 41, Sutton eventually faced a 4th and 15 at their own 46. Wiseman again performed some magic and hit 190 pound senior TE John Bitterman for a 17 yard gain and a first down on the D-T 36. With 59 seconds left to pull off the storybook finish, a combination of Sutton penalties and a swarming Doniphan-Trumbull put an end to that. Two holding calls on the Mustangs and two Cole Wiseman sacks totalling 22 yards snuffed out the comeback. Sutton actually ended the game on their own 31 yard line.

Sutton actually out yarded Doniphan-Trumbull 340-336, but it was the Cardinal defense that came up huge when it mattered. D-T can thank the relentless pass rushing of Eric Toben and Grady Koch, who came up with the big sacks on Sutton's last gasp. For Doniphan-Trumbull, Jordan Slough gained 209 yards on 22 carries, putting him over the 1000 yard mark for the second straight season. Slough now has 1,121 yards on only 107 touches for 2013 (10.48/carry). QB Riley Wiltfong added 109 yards on 13 tries. For Sutton, Cole Wiseman carried the ball 28 times for 106 yards. Before the games final drive, the Sutton QB actually had rushed for 133 yards before the sacks. Speedy junior Noah Johnson led the Mustangs ground attack with 126 yards on 17 carries and Trae Ramer ran 11 times for 52 yards.

Next week Doniphan-Trumbull will entertain 5-1 Hastings St. Cecilia for a game that could decide the district title. Sutton will travel to Hebron to face Thayer Central next Friday and try to break a rare 2 game skid.

.....and furthermore: Penalties really took a toll on Sutton in this game. The Mustangs were flagged 13 times for a total of 90 yards, many coming in drive halting situations. Despite heavy graduation losses to this Sutton team, especially in the line, I think the Mustangs are still in the hunt for a deep playoff run. Time will tell. They are not blessed with a deep bench so avoiding injuries will be a big thing.

.....also noteworthy: It goes without saying that D-T's Jordan Slough is one of the best running backs in all of Nebraska, regardless of class. The outstanding senior is dangerous as a pass receiver, a punt returner and can punt the football a mile. Not too bad on the defensive side of the ball either. Very electrifying player who can change the game in an instant. Sutton's Cole Wiseman is certainly in the same class and just has to be one of the best overall athletes in the state. Wiseman's father Chad, who calls the offensive plays for Sutton, was a splendid athlete for Adams Central back in the day and looks like he could still suit up and compete today.

.....in closing: So difficult to forecast a state champion in Class C-2. So many outstanding football teams. This class, for so long considered the red haired step child of Nebraska high school football, will be a joy to watch when the playoffs commence. You can take Doniphan-Trumbull, Lutheran High NE, David City Aquinas, Sutton, and Fremont Bergan, North Platte St. Pats and Hastings St. Cecilia and put them in a playoff hat and shake them up and not know who will emerge on top. All I can say is, fasten your seat belts friends, we're in for a fantastic playoff ride in Class C-2.