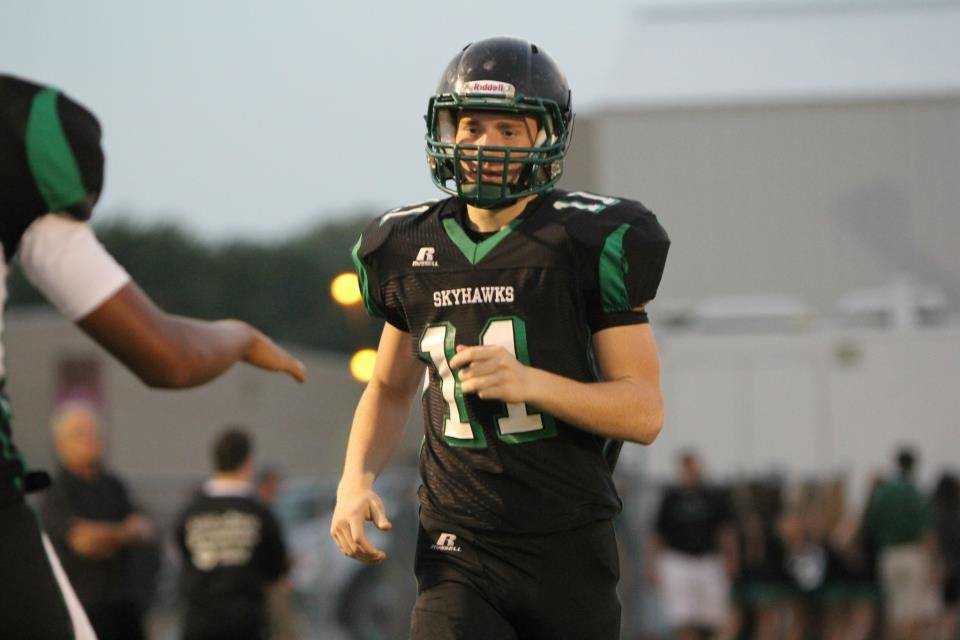 Suffice it to say, the River Cities Conference is going to have big things to say regarding how this class plays out. Half of the teams in the World-Herald pre-season ratings come out of this fine conference. With that said, I think Class B is really up for grabs in 2013. It certainly would not surprise me to see an all Omaha final, but I'm not sure it it can play out that way with the current district set up. Skutt and Gross look mighty good, but there are others who will have some thing to say about that.

So, why wait? Let's take a peak at who looks good here.

*Omaha Gross - Defending champs know they lost a very fine group of seniors, but the Cougars have some very fine lineman coming back and an all-state RB named Anthony Vigneri. Vigneri (6-0, 185) simply put, is just a pure football talent. Anthony ran for 1,159 yards in 2012, but is one heck of a linebacker (158 tackle points). Gross will need to break in a new field general, but junior Matt Herting might be a good one with some games under his belt. A couple of lineman I saw in that title game, Noah Arneson (6-2, 285) and Tyler Koraleski (225) looked pretty sharp. The Cougars do have a huge line, but in this class it's almost a must. Coach Timmy Johnk is one of my favorites for sure.

*Omaha Skutt - The Skyhawks were rolling along unbeaten a year ago before Gross won a regular finale 14-7. Gross got 'em again in the second round of the playoffs 9-6, but will the roles be reversed this fall? Tell you what, Matt Turman firmly believes his team was just a few breaks away from that Class B crown a year ago. When you return 7 of 11 players on a defense that led "B" in points and yards allowed, Turman knows he has something in 2013. The talent on this team is so widespread and evenly distributed that only one player really stands out. That man is Creighton Koley. The 6 foot, 180 pound senior is just a pure football player like Vigneri. Koley is the man at the controls on offense and is a ball hawker in that secondary. These 'Hawks really fly to that football. Another dude I like on offense is speed demon Dakota Krejci-Smith. Little guy at 155 but Krejci-Smith is slippery and elusive to go with that speed.

*Norris - Lots of high school football gurus think the Titans have enough talent returning to make it two finals in a row. Tough to loose a guy like special talent, James Kruger. But when you have a athlete like Jakson Reetz back at QB and an all-star coaching staff, it could certainly happen. Once again it will be the line, especially on defense, that will give this team a realistic shot at another title shot. And don't forget Reetz is a very fine linebacker on that Titan "D" and his LB buddy, Nolan Graham and defensive back AJ Flodman are gonna really stand out. I really like Flodman. Once again, if it comes down to a field goal or an extra point, Norris has the best in Class B in Ryan Bellinghausen. You want to watch something impressive, watch Bellinghausen during warm-ups.....yea, he's that good. One thing to consider is the fact Reetz may miss Norris opener @ York. He will be in Taichung, Taiwan with the USA Baseball 1BU National Team August 30 through September 8th. So will mean he will not return to Norris until September 10th?

*Elkhorn - First of all when you have Mark Wortman as your head coach, you're always going to be in the hunt. How many years did we see Wortman alternate entire offensive units on Antler possessions? Wortman has only 2 returning starters on offense and 5 on defense, but some pretty fine skill players remain. One of those is Jake Hasty, who blasted his way to 886 yards rushing and was a real man as a DB. Sam Larson (6-3, 265) will be a force in the line and Ben Hass is back to run things on offense. Knowing Mark Wortman, he first priority will be defense. What's crazy is that the Antlers were 6th best in "B" a year ago, allowing only 206 yards/game. Only problem....4 of the 5 teams ahead of them are River Cities rivals. That's how good Class B defenses are, so just don't expect a scoring explosion if you attend a game between RC toughies.

*Gretna - Dragons are picked to win it all in some circles. 8 returning starters on both sides of the ball will tend to sway a lot of folks. Doesn't hurt to have a quarterback like Nick Stoltenburg either. Stoltenburg's stats won't jump out at you, but this is one tough dude. Speaking of tough dudes, how about Mick Stoltenburg? Good enough to get an offer from the Huskers. At 6-5 and 260 Mick is going to move a lot of folks around and down. Stoltenburg also has a nasty little habit of being in the opposition's backfield as in tackles for losses. The thing Gretna has to do is light up their offense. Only averaged 264 yards/game and the passing game did not reach a 1000 yards for the season. Yes, I know it's the black and blue division called the River Cities, but still. Dragons will also be in good shape if they need a field goal to win it. Place kicker Jay Gilman is a dandy.

*Aurora - The UK funk band Incognito had a hit called "Always There". Reminds me of Aurora's football team when it comes to the playoffs. Football greatness for that manner. The Huskies seem to just reload every season no matter how much talent they graduate. Huskies will need to find a QB (Luke Standage?) but 1000 yard RB Brock Reichardt is back and blockbusting FB Eli Bricker also returns. Both of these gentlemen are excellent linebackers on defense, especially Bricker who was the 3rd ranked tackler in Class B. TJ Dozier was a fine lineman a year ago and should be a force this fall as well. There aren't too many coaches as wise as Randy Huebert and his staff is one of the best in the biz. The Aurora Huskies have quite a tradition and this year these kids realize it. Opener at McCook should be pretty sweet.

*McCook - I saw a quote by somebody somewhere that stated "McCook may be a "darkhorse" in "B" this fall. Are you kidding me? I'm wondering if this person was in a deep sleep the past 25 years? That'll be the day when a Jeff Gross Bison team is a darkhorse.....I'm still laughing. Anyway, McCook should have quite a battle for the QB gig last I checked. I think McCook has only one starter back in the O-Line and that's Seth Koetter (6-0, 205), but the defense has more of a veteran look. If I remember correctly, McCooks JV team did not lose a game last year so once these kids get a few games under their belt, they should be pretty salty. I got a kick out of seeing a kid who will be a sophomore this season, Luke Curl. How does 6-9 and 325 pounds grab ya? Going to look imposing if nothing else. Lad must eat tons of steak and mashed potatoes. Have to think McCook may be the Best in the West this fall.

.....and, some pretty good teams not far behind:

*York - Man do I love the way Glen Snodgrass coaches....wow! Snodgrass could move up to a Class A program and not miss a beat, but for now the Dukes are blessed to have the man. Linden Kaliff, with 1,594 yards passing and hoops star Ty Danielson's 64 receptions for 712 yards makes this offense explosive right off the bat. Even Neville can do damage at FB (772 yds. worth in 2012) and big old Ronaldo Trevino (6-0, 280) in the trenches also help. I like the way the Dukes played the game a year ago. Just played with fire and confidence and were just a dropped pass away from the Class B semi finals a year back. Home opener against Norris will be fun and I'm going to be there.

*Crete - You're not going to see the Cardinals go 3-6 very often. Super coach Chuck McGinnis has 12 starters coming back (7 on defense) and a son playing QB (Alex, 6-3, 195 jr.) I remember not that long ago on an Adams Central visitor's sideline, Alex was the ball boy.....not anymore! Cardinals have a splendid 2 way player in Jake Harms (WR/DB). Vince Thatcher is a 3 year starter who also will be very good. There will be no 3-6 this fall, no sir.

*Ralston - 2 time 1000 yard runner Isaac Wallace makes this team dangerous by himself. Wallace might be the most exiting back in Class B. Besides, the Rams have about 3/4 of their starters back, one of whom is 6-5, 280 pound Zach Flott. Flott is a D-1 talent and an all-stater in 2012. He also goes by the name, "SIR". Rams might be a team that surprises a few folks. Too bad they are in the same district as Skutt and Gross. Ralston's defense will be very good too but the offense needs to clean up the turnovers in 2013.

*Plattsmouth - Blue Devils will probably win their district, plus possess a very fine RB in Brandon Pick who ran for 1,348 yards in 2012. Plattsmouth will have a stellar O-Line to open those holes.

*Blair - Top notch line and a stud named Will Schany. The 195 pound Schany has won THREE state wrestling championships and eats running backs for lunch at linebacker. Ball hawker on defense named Vance Janssen who picked off 5 passes last season is still around.

Sidney - This team has won only 3 games the past 3 years and the last time they had a winning season was 2005 (5-4). Last time the Red Raiders made the playoffs was 1994. 14 returning starters make things look better in 2013 then they have in years. Have to pull for these guys don't you? I know, if you're Scottsbluff, Gering or Alliance, you can't....Duh.