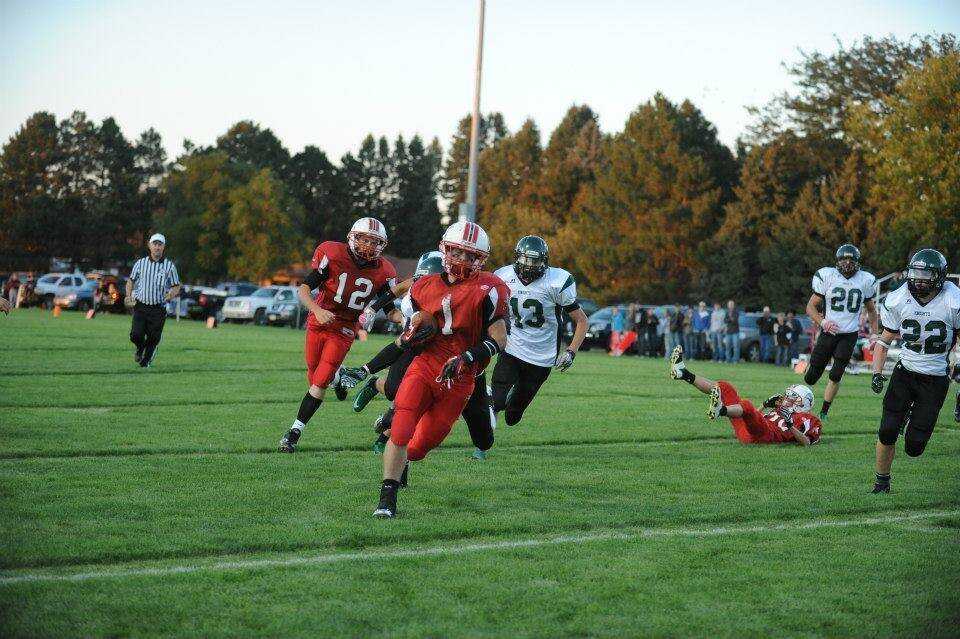 Anselmo-Merna's Trent Geiser is off to the races.

Buckle those seat belts high school football fans because in less than two weeks all Class A and B schools hit the gridiron for their season openers. Several lower class teams also put on the gameday pads in week zero and 10 schools actually kick off the 2013 season on that Thursday.

It's been quite a start to high school football practice, which began for all classes last Monday. Practice as in 2-A Days. Not a big deal for most, although not many look forward to the rigors of the twice a day grind. What adds to that grind is the fact many schools started classes just a day or two after football practice began. Some kind of routine for these kids.....practice-school-practice-bed, repeat....every parents dream, but a strain for the young athletes. Unless my memory is getting shorter by the year, I cannot seem to recall a situation such as this in recent years. I guess we'll find out who the real troopers are when all is said and done.

Each day we'll scope out a different class, going smallest to largest, offering you an assessment as it appears to me. Onward and upward prep football fans:

Expect a same dose of the heavyweights from a year ago. Giltner, behind record setting Jake Findley, bested Humphrey St. Francis 42-26 for the title in 2012. One key player in this class that will be sadly missed will be Lindsay Holy Family, who didn't have enough players to field an 8-man team this fall. They will join Humphrey Public next year for football.

*Giltner - Hornets will need a QB and will probably run more this season. As far as that marvelous spread offense of Jeff Ashby runs, every player coming up has run it so that is no problem. Garrett Poppen is a returning all-state player. Just can't picture Giltner not being a major player in D-2 this year. Ashby is one smart cookie.

*Humphrey St. Francis - Give that ball to junior back J.J. Oltmer and let him run over people. Probably a little more to it than that, but Eric Kessler is about as good as it gets when you talk about head coaches. Looks like Sam Zach will be given the QB reins and along with that position, the Flyers will have to plug in other newcomers. But we've heard that old song and dance a time or two and trust me, St. Frans will have these "new" players ready to roll by the time the playoffs roll around. Ahhh, who am I kidding, they'll be ready to go in a few weeks...that HSF football.

*Shelton - Ok, Luke Glenn and his 2,009 rushing yards are gone but when you have a pair of all-state lineman like Zach Oliver (6-1, 240) and Nate Muhlbach (6-0, 260) returning, you could put Bobby Mills and Bob Jensen in the backfield and we could gain yards.......alright maybe not, but you get the picture. The 'Dogs will be alive and well in 2013 and have started a fine tradition that these guys want to continue.

*Falls City Sacred Heart and Sterling - No they're not joining forces, but are major players from the same area. FCSH and that Irish defense returns 4 starters and that might carry the offense to start. Doug Goltz (also one of THEE very best) always seems to have speed to burn. Sure like that Brandon Schwang at linebacker. Sterling's ace will be running back Chris Wenzel who ran for 1,639 yards a year ago. Wenzel and his senior cohorts have a wealth of experience and could give HSF and Giltner an run for the money. The Jets (love that name) have 5 starters coming back on offense and 4 return on the defensive side. Lookin' good to this guy.

*Kenesaw - Well, by now most of you know about the loss of Preston Schnitzler (ACL) and all-state line candidate Michael Duffy, who is bypassing his senior season to concentrate on mixed martial arts. OUCH, big time. The younger Schnitzler nearly gained a 1000 yards as a freshman, but there is still one more Schnitzler in the house in Austin. Austin missed most of last season with a horrible injury but should be a big time asset to the Blue Devils this season. Still can't see this team not making some noise in D-2 this fall.

Here are some other teams to keep an eye on in Class D-2:

*Fullerton-Scrappy young team that know how to play the game. Brutal, brutal schedule will test the Warriors but I like this team.

*Bancroft-Rosalie-QB Carsten Tietz is the key player. 185 pounder has 1,418 rushing yards and led the "D" in tackles. No stranger to the playoffs. Out to rectify last year's rare losing mark (3-6).

*Wynot- Has to be considered because of their wild passing game. Same bunch that sparkles on the hardwood know how to play a little football too. The air will be filled with Blue Devil footballs this fall. Fun team to watch. Better to able to cover those bombs if you want to beat this bunch.

*Lawrence-Nelson-Getting better each year. Chase Ehlers is a man. Gary DeBoer would be proud of this team and it's steady progress.

*Anselmo-Merna-All I know is that "Running Back High" has another jewel in junior Trent Geiser. Boy can flat gain those yards, man. Now you see him, now you don't.

*Medicine Valley-Felt sorry for these guys when they were blitzed by Giltner, but when your star QB (Riley Garey) can't even suit up, it's difficult. Still like the way they competed.

*Hayes Center-One name is all you have to know - Seth Gohl...'nuff said.

*Garden County-Jason Spady ALWAYS has a stable of running backs.

*Mullen-Brownie always fields some tough hombres, besides nobody has a 'stache like Brownie!