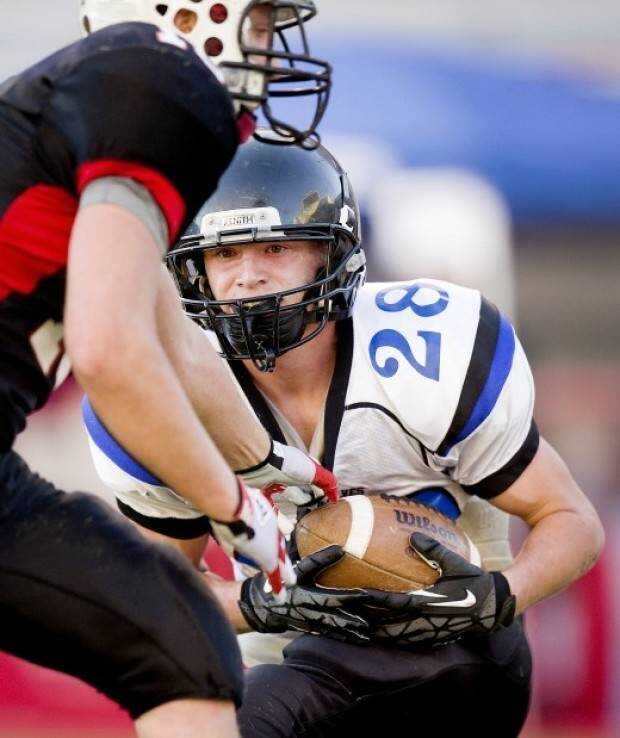 Here is the final installment of the players you just can't miss watching this fall. As I complete this blog, only a few hours remain before the official beginning of the 2013 Nebraska high school football season. Can you feel it?

Jakson Reetz - Norris (6-0, 200) (#1) - Where do you start with this young man? Starting QB for the Titans since his sophomore season, starting PG for the basketball team since his freshman season and his best sport is.......baseball. Gatorade Player of the Year (baseball) last season and a verbal baseball commit to the Huskers. Hold on though. If you think he isn't serious about football, think again. This young man piloted his team to the Class B state championship game last year and came painfully close to beating Omaha Gross (14-7). Reetz is one cool customer under center, throwing for 644 yards and 5 Tds, and rushing for another 644 yards and 13 scores. Those numbers won't jump out at you but remember, Norris had James Kruger toting the ball for 2,294 yards. Reetz is not afraid to mix it up either. #1 is the leading tackler for the Titan defense with 116 tackles from his linebacking slot. Reetz also does the punting. Norris lost a ton of talent from last year's team, but with Reetz at the controls most prep sports scribes are predicting another top notch campaign for Reetz and the Titans. Without a doubt, one of the top athletes in Nebraska.

Luke Gifford - Lincoln SE - (6-4, 195) (#13) - Yea, well who doesn't know about this guy? I could see "star" written all over this Knight defender when he was a sophomore. It has been a while since I've seen a defensive player get from point "A" to point "B" so quickly. Seriously, if you hadn't previously made a point of watching him on a given play, Gifford would seem to appear out of thin air to make a tackle for a loss, break up a pass, pick one off, or completely blow up a sweep. I never saw a back beat Gifford to the end zone on a long run. An Super-State selection as a sophomore, Luke Gifford was an easy pick for a Nebraska scholarship FB and trust me, you will hear his name plenty in the future. Gifford could be a star in any sport he chose to play. Miss seeing this guy perform and you will regret it. Gifford cause me a sleepless night or two just thinking about the games I saw him play.

D.J. Foster - Lincoln SE (6-3, 315) (#67) - Gifford's teammate. If you ever happen to run into Mr. Foster, it's SIR with a capitol S. You know I love to watch running backs, but I cannot ever remember going to a game and not being able to take my eye off an offensive guard. It's been a ton of Fridays since I have seen a high school player with such brute force. When he pulls on a sweep it looks like Godzilla on a dead run bowling over anything and anybody in his path....and this Class A football folks. There were actually a few plays when I saw some defensive lineman just simply run into Foster and bounce off to the ground. I'll bet D.J. Foster had more pancakes than Aunt Jemima made just in 2012 alone. Needless to say, Foster is a Nebraska recruit and currently listed as the number 14 rated offensive lineman in the country. I kid you not, some of his blocks reminded me of the old WWF Wrestling gigs where the name guys picked on the poor nameless contenders and just crushed them like grapes. One of the finest I've seen in a looooong time.

Isaac Wallace - Ralston (6-2, 190) (#35) - Already a twice a thousand yard rusher, Wallace can pick 'em up and lay 'em down as witnessed by his :10.8 and :22.3 track times. Wallace has always seemed to have good blocking up front but this fall the Rams return five starters in the O-Line and this guy knows how to read his blockers. Maybe the quickest off the ball in Class B, Isaac Wallace just seems to weave and glide through defenses. Not a darting, quick-cut type back, #35 seems to possess a kind of radar that gets him on a "shortest-route-to-the-end zone" GPS. Most of the time any state title serious contender has a go-to runner and Wallace would be that man in 2013. He is also a very good pass blocker and can make that downfield block when he has to. Fun player to watch. Reminds me of a water bug when he maneuvers his way in and out of traffic. Just may be the best vision runner in "B". You'll love this kid.

Nolan White (6-1, 191) (#21) and Kyle Jensen (Jr) (5-10, 169) (#28) - Exeter-Milligan - Man, woman, and child can these boys play defense! White was an all-state selection at linebacker last season, and Jensen wasn't far behind. No, the Timberwolves fell one game short of a state D-1 title a year ago, but the way Dean Filipi had these fellas playing defense just floored me. White finished with a 151 tackles in 2012 and the smaller Jensen made 130 stops but also picked off 8 passes and recovered 4 fumbles. This defense was so well orchestrated and most of them return this fall. You're not going to find many players who are smarter defenders than White or Jensen. On offense Jensen rushed for 987 yards and scored 22 Tds, while White paved the way on the O-Line.

Only thing I can say is that White, Jensen and the rest of the Timberwolves "D" might be the slickest bunch I've seen in a while. 20/20 vision and eyes in the back of their heads.