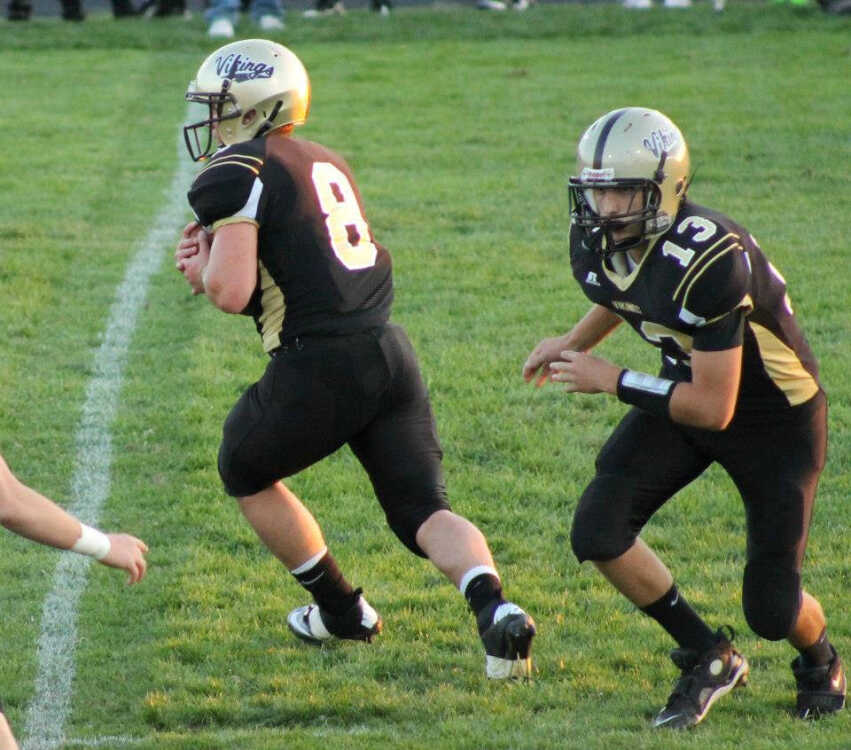 There were many who follow high school football closely that thought Grand Island Northwest may be in line for a win over 5th rated Aurora, but what transpired Friday night at the Huskies house has most of us still pinching ourselves to see if it was real. Aurora, expecting a barrage of passes from the state's leading quarterback, were certainly caught sleeping as the Vikings mixed in the rampaging running of Kyle Bockmann and the passing of Zach Rouzee to notch one of the biggest shockers of the season, regardless of class.

The Vikings offense was wickedly proficient, but it was the menacing defense that may have stole the show in the second half when they pirated 3 passes, 2 of which went for touchdowns. The beat down was the worst for Aurora since the Huskies took it on the chin to Beatrice 58-0 on October 17, 2003 in the Orangeman's old bowl. Rouzee, who entered the game with a state's best 1,800+ yards passing, only attempted 3 passes in the 2nd half, all of which fell incomplete. Meanwhile, the Huskies suffered 5 turnovers and the Vikings cashed every one of them into points. You could almost print that Murphy's Law took over in the second half for Aurora, but the Huskies can't even blame old Murph for this one. The Vikings were that good, and that's putting it mildly. At this point, one has to wonder just how good this Northwest football team is right now?

Outside of a couple of lost fumbles, there wasn't much the Vikings did wrong on a parents night the Huskies would soon forget.

Northwest wasted little time from the outset, as Zach Rouzee nailed favorite target Alex Larsen on a 49 yard scoring strike on just the 5th play of the short 5 play, 70 yard opening drive. The 1st quarter ended with Northwest up 7-0, but the Vikings capitalized early in the 2nd stanza when 210 pound senior Tanner Martin sacked Aurora QB Troy McDonald, forced a fumble and recovered it himself. The 13 yard loss on the fumble put Northwest in business at the their own 41 and 2 plays later Rouzee nailed Larsen on a 47 yard completion that carried to the Huskie 14. Rouzee then hit Larsen again, this time for a 10 yard TD on a 3rd and 10 play.

Things soured again for the Huskies on the next drive when a bad snap on a 4th and 28 put Northwest in business at their own 48. That's when Bockmann, the 195 pound senior, kicked it high gear. Following the crunching blocking of the right side of the Vikings line, Bochmann ripped of runs of 28 and 18 yards, then a couple of 1 yarders that took it to the Aurora 3. Rouzee did the honors, bowling over Huskie tacklers for a 3 yard run right through the heart of the defense for the score. Northwest had a 20-0 lead at that point.

Aurora did put together a nice drive right before halftime, driving to the NW 2, but a dropped pass and a splendid batted away pass by Cole Leaman on a 4th down play halted the drive to end the half.

The second half was a nightmare to never remember for Aurora in the second half. On Aurora's opening drive, Troy McDonald was sacked for a 25 yard loss on a 3rd and 1 play at his own 30. McDonald lost the ball and Leaman pounced on the loose pig at the 2 yard line. Bochmann scored 2 plays later from the 1 and it was 27-0 just like that. The bad news was just beginning for Aurora. After a nice kick return by Cole Ashby to the Huskie 40, Northwest recovered a bad pitch by McDonald at the Aurora 37 and Kyle Bockmann took over again, blasting for runs of 16, 7, 7, and 4 yards before Rouzee again ran it in, this time from the 3. And with 6:17 left in the 3rd quarter the Vikings had a 34-0 lead. But the nightmare on "L" Street was just beginning.

After the ensuing kick return to the Huskie 27, Cody Harms picked off a pass on 1st down and skipped down the NW sideline 37 yards for a touchdown......Northwest 41-0. Aurora wouldn't quit though. After a long kick return by Cole Ashby, a 15 yard personal foul penalty by NW, the Huskies were in business at the Northwest 31. But the Vikings defense turned mean, and on a 3rd and 17 from the NW 20, Cole Leaman did it again. The 180 pound senior picked off a McDonald pass and returned it 78 yards to the Aurora 17 to end the 3rd quarter.

Kyle Bockmann carried it a yard, then skirted 16 yards for the score to open the 4th quarter and Northwest was in "crush" mode, leading 47-0. Aurora later put together another solid drive but it once again ended in disaster when Ty Johnson intercepted a McDonald throw and turned an 82 yard "pick 6". With 5:52 left in the game the pounding continued.....54-0.

The final play of the contest probably summed it up as good as any point in the game. My drum student Luke Standage took off on a quarterback keeper, broke several tackles, and sprinted toward the Viking end zone only to be smacked out of bounds at the 2 yard line as time ran out, preserving the shutout for the proud Northwest football team.

The final stats did not reflect the 54-0 score. Northwest totalled 323 yards compared to Aurora's 255, but it was the 3 interceptions, 3 lost fumbles, and sloppy pitch plays that led to the lopsided score. And don't be fooled by the "sloppy pitch" play statement. It was not so much Aurora shooting themselves in the foot. The tenacious Viking defense was the cause for nearly every miscue the Huskies suffered.

Northwest was led by the inspired running of Kyle Bockmann, who rushed for 130-26 carries (2 Tds) and Zach Rouzee, who completed 8 of 17 passes for "only" 151 yards. Rouzee also ran for 2 TDs. Alex Larsen hauled in 5 catches for a 121 yards and 2 scores. Aurora's Troy McDonald was 15-27 for 138 yards, but suffered 2 interceptions, one of which was a pick six.

The Vikings are certainly right where they want to be in District 6 race and now have the rest of Class B wondering just how good this Northwest is right now. The Vikings close the regular season with home games against York an then the closer with Columbus October 19th. Aurora will try to rebound from the 54-0 stinging by hitting the road next week to Columbus, then York the 19th. And in case you may be entertaining thoughts this Aurora team may be done for 2012, you probably might reconsider.

Tonight will be a night the Northwest Vikings will remember for years to come and hopefully use it to propel them to greater things down the road and into the Class B playoffs. And in case anyone was doubting that Grand Island Northwest was for REAL.....things may just be getting started for these Vikings. While 54-0 may have been "the nightmare on "L" street for the Huskies, it may have ignited a fire that could carry Northwest to new heights.