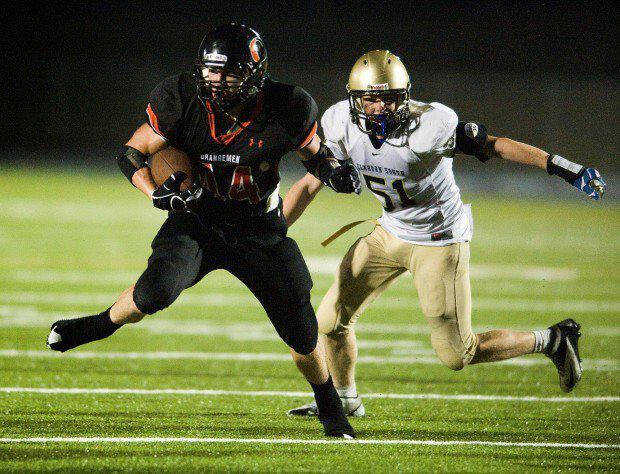 Grand Island Northwest quarterback Zach Rouzee set a Class B single game passing record last Friday when he threw for 397 yards against Hastings in the Vikings 46-27 romp over the Tigers. Rouzee completed 20 of 31 passes to eclipse the old mark of 377 set by Ryan Woodard of Omaha Roncalli when they beat Beatrice back in 1994. Rouzee, who played in only is second game as a starter, had thrown for 336 yards and 3 touchdowns by halftime.

Alex Larsen was on the receiving end of only 4 of Rouzee's tosses, but amassed 203 yards, 2 of them going for touchdowns of 29 and 89 yards. Lightening fast Alec Waters snared 6 passes for 143 yards and had a 72 yard reception for a score. Northwest has now matched it's win total of a year ago and each of the 4 years prior to that. The Vikings have gone 2-7 each the past Five seasons. Northwest travels to McCook this Friday to face a Bison who is off to a uncharacteristic 0-2 start.

Here are the other fine performances that caught my eye from Week One:

*Tyler Kavan-Wahoo - The Warrior all-state running back exploded for 320 yards in Wahoo's 45-18 blasting of an excellent Boys Town team despite not feeling well with congestion and breathing problems. Let's hope future opponents never have to find out how he runs when he feels like a million bucks. The 185 pound dynamo already has 607 yards rushing in 2 outings. I think it's safe to assume he leads the state in rushing yards.

*Matt Stankowski-Columbus - Still "filling in" for the injured Tommy Ernst, Stankowski blitzed Seward for 184 yards in 31 carries. He now has run for 378 yards in 2 games.

*Trey Barnes-Seward - Barnes actually bested Stankowski in the Bluejay's 42-35 loss to Columbus. Barnes rambled for 189-32 carries and scored on short runs of 5, 5 and 2 yards. One thing seems certain. When Columbus or Seward plays the scoreboard is going to get a workout.

*Connor Mathews-Millard North - Quarterback Isaac Aakre decided to let Millard West know the Mustangs had another back that could scoot. Mathews broke loose for 150 yards on 26 carries in the 24-3 win, but Aakre certainly didn't go unnoticed. The signal caller ran for 94-19 carries and scored all 3 touchdowns on runs of 1, 20, and 1 yard out.

*Leighton Chicone-Lincoln Christian - The wide receiver hauled in 6 passes for 147 yards scored 4 times in the Crusaders surprising 32-7 win over rated Milford. Chicone caught TD passes of 68, 45, and 1 yard and pirated a Milford pass and retuned it 60 yards for another score.

*Lane Yates-Omaha Westside - The 180 pound junior had his second straight huge ground game for the Warriors by running for 203-23 carries in Westside's 35-30 loss to Creighton Prep. Yates had a 66 yard touchdown in the game and elevated his season total to 337 yards in only 2 games.

Yates and his teammates will be in Grand Island Friday night to face the Islanders.

*Logan Fleming-High Plains - Yes, High Plains has another runner besides Tanner Fate and Clarkson/Leigh found out the hard way. The 5-9, 160 junior ripped the new co-op for 198 yards on only 11 carries. Fleming had a 74 yard run for a TD, caught a 66 yard pass for another, and returned a kick-off 68 yards for yet another touchdown in the 62-6 romp. Tanner Fate "took it easy" with 90 yards rushing on the night.

*Travis Brouilette-Hastings St. Cecilia - Helped his Bluehawks to a 48-6 win over Centennial in the season opener for both squads by running for 158 yards on 17 carries. Brouilette scored on runs of 3 and 32 yards to aid Coach Carl Tesmer in reaching his 300th career coaching victory.

*Luke McNitt-Kearney - Powerful quarterback rambled for 192-25 touches and scored on runs of 20 and 14 yards as Kearney thrashed Norfolk 39-20 Friday. One thing you want to stay away from is tackling McNitt head on......big dude.

*Colton Steer-Crete - Speaking of big dudes, Steer and his Cardinal teammates must have been looking for redemption after that opening season loss to Ralston. The 6-2, 215 pound battering ram rushed for 218 yards on 38 carries to lead Crete to a 34-20 win over Waverly. Steer scored from 34 and 20 yards out and was a demon from his linebacker slot.......as usual.

*Austin Rose-Lincoln North Star - This 6-0, 210 pound junior is making North Star fans forget Michael Minter ever existed on offense. Rose exploded for 230 yards on 36 totes in a 35-27 Navigator win over Lincoln Northeast. Take from me, Austin Rose is a dandy. I saw him play Lincoln SW in Week Zero and this kid can run and run hard.

*Matt Klein-Scottsbluff - He ran for 155 yards on 24 carries last Friday against a good McCook football team. Just for good measure, he threw a 24 yard touchdown pass to Randy Wenz in the Bearcats 17-7 win over the Bison. Klein, who ran for 1,159 yards a year ago, has now has rushed for 302 yards in 2 games this season for 2-0 Scottsbluff.

*Preston Schnitzler-Kenesaw - And you though there was only Tyler Schnitzler around the Blue Devil's football team....think again. The 165 pound freshman gained 182 yards on only 11 carries in Kenesaw's 57-14 romp over Dorchester. He scored 3 times and averaged 16.55 yards per touch in that contest. Preston now has 253 yards in Kenesaw's first 2 games. Yes, there is even another Schnitzler, sophomore Austin, who is currently injured was slated for a ton of playing time going into this 2012 season.

The Morrill Football Program - Hearty congratulations to the Lions for ending a 27 game losing streak by besting Banner County 22-9 last Friday. Morrill also won it's first 8-Man game after dropping down this season to those ranks. Morrill had to fold it's program toward the tail end of last season due to dwindling numbers while competing in 11-Man football. How cool is this for Morrill?

*Yohanna Shokai-Lincoln High - the 6-0, 195 pound junior rambled for 140-32 carries in a 28-6 loss to number one Lincoln Southeast. Very neat to see this young man do so well after missing the entire season a year ago and most of his Freshman campaign as well. Hey, a buck 40 against Southeast's defense.......not too shabby.

*Jessup Workman-Beatrice - Oh my, looks like the Orangemen have a promising runner that's going to be around for two more seasons after this one. Workman, a 190 pound sophomore, rushed for 190 yards on only 10 carries and scored 3 touchdowns in a 29-3 win over Bennington. Workman rushed for 53 yards in the opening win over Elkhorn South, so it looks like this kid is legit. If you get to a Beatrice game, watch for big number 44.