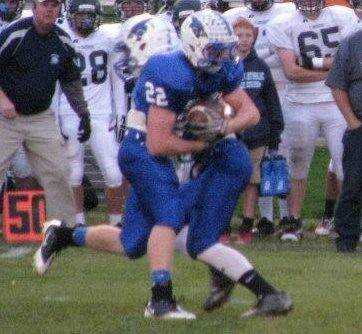 Nate Meier of Pierce - One of the state's toughest FB players.

*Alec Galvin-Burwell-1,134 Yards** ¨C The 6-0, 170 Longhorn is an old hand at this 1000 yard thing. Galvin ripped off 1,176 yards as a sophomore and is quick as a wink. There arenˇŻt many years that Burwell doesnˇŻt have a thousand yard back, but that doesnˇŻt necessarily mean they are a running team. Last season sophomore Sage Gideon stepped in and threw for 1,578 yards and 19 touchdowns, so that definately opened up the running game for Alec Galvin. The ˇ®Horns have qualified for the post season the last 7 years, so the chances of Mr. Galvin notching his 3rd straight 1000 yard season are pretty solid. This kid is not easy to tackle.

*Chet Beckman-Bloomfield-1,077 Yards ¨C The Bees have had more 1000 yard rushers than almost anybody in the state. 13 year veteran, Jim Dooley is such a great coach and certainly one of the true gentlemen in the football coaching ranks. Beckman is a tough kid that plays quarterback and flat out gets the job done. Nothing fancy about this 6-1, 175 pounder, but it takes patience and precision to run DooleyˇŻs offense and Beckman is the perfect fit. This senior class at Bloomfield is really good.

*Ben Burmeister-Pender-1,036 Yards ¨C How tough are these Pender kids? Last winter, they qualified SIX wrestlers for the finals, including Burmeister. These same lads also know a little about the game of football too. Last season, the Pendragons made mince meat out of all seven opponents except Bancroft-Roaslie, and cruised into the playoffs as the #1 seed in the East. The average margin of victoryˇ­.60-15. But a speedy High Plains caught Pender looking ahead in the second round and sent ˇ®em packing 39-30. This season Burmeister is back for one more go at it and the tough customer is going to rack up a whole lot more yards than 1,036 in 2012. I just wonder how much playing time this guy had during the regular season with the lopsided scores. Big Ben will be a name you will read about this fall and is a an all-state candidate for sure.

*Alec Wilson-Bloomfield-1,012 Yards ¨C The other half of BloomfieldˇŻs 1000 Yard Twins, WilsonˇŻs forte is really defense. I saw him play in Giltner a years ago in the playoffs, and it seemed as though Wilson was in on every tackle. An all district player the past 2 seasons, Wilson was among the top tacklers in class D-2 in 2010 and 2011. He is also a shifty runner on offense, but packs a powerful punch when he lowers his head to meet a tackler. Pure football player.

*Ryan Tegtmeier-Bruning-Davenport-Shickley-1,011 Yards ¨C Most fans recognize this young man for his skills on the basketball courtˇ­.and he is one of the best in any class, trust me. What some folks do not realize is that Tegtmeier is 6-1 and a hundred ninety pounds and is tough as nails. In addition to his 1,011 yards rushing, Tegtmeier threw for 806 yards and 15 scores. The good news for BDS is that their district looks very manageable. The not so good news is they are in D-1, the most brutal class in all of Nebraska. Tegtmeier has an excellent chance at surpassing the 1000 yard plateau in both rushing and passing this fall. Think Tegtmeier is afraid of hurting himself for basketaball? Not a chance. This kid is fun to watch!

*Brady Rasmussen-Loup City (Jr)-1,005 Yards ¨C Well, what do you know? Loup City is on the rise. When I was playing football in the late 60ˇäs, the Red Raiders were Class B. Numbers at the school diminished so badly over the years that Loup City was down to Class D-2 and barely able to get through a football or basketball season because of injuries and low numbers. But this season the Raiders are back in D-1 and have seven starters returning on both sides of the ball. Rasmussen ran for 1,005 yards as a sophomore, but now is joined in the backfield by quarterback Austin Bochart, who rambled for 766 yards on only 101 carries before he was injured and forced to miss the final two games. This fall, Brady Rasmussen should be able to improve on his rushing and touchdown (11) totals despite the fact the Red Raiders face a brutal schedule with the likes of Twin Loup, South Loup, Burwell and rising Ansley/Litchfield. Rasmussen is on track to being a 3 years thousand yard runner.

In the days to come, we will take a peek at the returning Quarterbacks around the state that should make an impact in the upcoming 2012 season. Class A is Loaded. WeˇŻll also look at some of the top games around the state on August 24th and August 31st, and believe me there are some dandies.