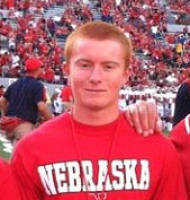 Gosh, maybe it's just my imagination, but Hastings St. Cecilia sprinter Blake Micek never seems to lose a race and always seems to be in tip top condition. I can't ever remember Micek being hurt, although when I spoke with the "Crimson Cruiser" last Friday he did say he was injured.....once. It is a rare occurance indeed when you see a high calibur sprinter who makes it through even a single season without a setback. There are very few sporting events that demand an athlete to go full throttle every race, every time out, but a 100 and 200 meter track man must do just that. The easily recognizable red-haired sprinter from St. Cecilia must have some secrets is all I can figure out. But one thing that isn't a secret........Blake Micek does not like to lose.

Micek seemingly burst on the scene out of nowhere as a sophomore, but having run in practice every day against an athlete like Dalton Sealey made the youngster mature in a hurry. Micek seemd to improve every meet 2 years ago and by the time districts rolled around, Blake was ready to pounce. The sophomore qualified for state in both the 100 and 200 and led off St. Cecilia's 400 meter relay that was the favorite to take the gold in Class C. Micek had also gone head to head most of the season, not only with Sealey, but with one of the state's best sprinters in Thayer Central's Seth Weidel. Weidel was good enough to nail a track scholarship to Nebraska that season.

The St. Cecilia sophomore speedster immediately let 'em know who he was at Omaha Burke stadium by besting both Dalton Sealey and Seth Weidel in the finals of the 100. The Crimson Cruiser not only was the lone Class D or C runner under 11 seconds, but he finished 7th in the all-class Gold medal 100 meter standings. Nice start for a rookie, eh? Shortly therafter, Micek ran the opening leg on the Bluehawk's 4 by 1 relay that won gold in class C. He then finished his first ever State Track Meet by finishing 3rd in the 200. Incidentally, he finished ahead of another sophomore by the name of Levi Gipson of Lincoln Christian. This would not be the last meeting between these two super sprinters. After all was said and done, Blake Micek helped lead his St. Cecilia teammates to a a smashing 22 point victory in Class C and a State Track Title.

Last season as junior, Micek suffered his only injury in the first meet of the campaign at St. Paul. He missed a couple of meets, but has not missed one since. Blake Micek also never lost a race the remainder of that 2011 regular season. In fact, the only race the Crimson Cruiser lost following that was in the prelims of the 100 at state last season.

So, let's rewind to last year's state track meet. I'm perched at my usual spot in the Omaha Burke press box and most of the sports scribes have already conceded both the Class C 100 and 200 to this outstanding track sensation from Lincoln Christian named.......Levi Gipson. After all, the Husker track coaching staff was all over this kid. Not many events Gipson could not excel at on the track or in the field. Did these folks not recall Blake Micek had won the 100 a year ago? Guess not. After finishing 2nd to a sophmore in the prelims, Micek came from off ther pace to beat Gipson in the finals, posting a :10.85 time. Gipson could muster only an :11.02. Ok, Gibson was a stellar 400 man, so he just needed a little more distance, they said....he'll win the 200. The Lincoln Christian flyer shot out of the blocks like a 4th of July rocket, but Micek ran him down in the final strides to grabbed the 200. Think it wasn't close? Blake Micek won the 200 with a :22.215. Gipson was a quick blink behind with a :22.257. I wonder how many times they had to watch that replay?

Not much has changed since last year's state track meet for the Crimson Cruiser. Blake Micek keeps on winning and winning and winning. I never pick up the paper or look online and see anything but a 1. before Micek's name. Monday night at the Central Nebraska Track Championships at Northwest high school, the Bluehawk senior suffered the first loss of his senior season. After winning the 100 meter dash, he was bested in the 200 by Nebraska track recruit, Cody Rush. It took all Rush had to hold off Blake Micek. Rush edged Micek :22.34 to :22.67. By the way, Mr. Rush and Mr. Micek will get to know each other a little better next season. Did I fail to tell you that Blake Micek received a track scholarship to the University of Nebraska........yep. The Crimson Cruiser is a D-1 athlete.

So what is that secret to to Blake Micek's good health and good fortune on the track? Well, God given talent for sure, but Micek said it's all in the warm-ups. He told me the mistake most sprinters make is that they do thorough warm-ups when it's cold, but have the false notion that you can cut that time down considerably when the weather is nice and warm. False notion, Micek informed me. The warm-up routine should be the same regardless of the temperature. He is convinced that is the key to his mostly injury-free career. He also credits having to run against Dalton Sealey day in and day out for two seasons for making him the sprinter he is today.

This guy also thinks there may be some bloodlines involved. It just so happens that Blake's father, Tom Micek, was an excellent sprinter for the Hastings St. Cecilia tracksters back in 1975. Tom Micek set the Bluehawk 100 Yard Dash record by blazing to a :09.8 time. That record stood the test of time for 35 years.....still does. Considering the fact St. Cecilia has has some outstanding sprinters throughout the years, that is quite an accomplishment. Yea, they had a guy named Tom Fish, who went on to run for the Huskers, and was an All-American twice over in track. Fish ran on a record setting sprint relay and ran a sub 21 flat 200 more than once.

As the 2012 State Track Championships at Omaha Burke loom closer on the horizon, don't be surprised if a young man with red hair comes out of the pack to win the 100 and 200. Been there, done that. I seriously doubt if they will be too surprised in that press section at Burke this 3rd time around.....the Crimson Cruiser will make sure of that.