2012 Boys State Basketball Tournament - One of the Best Yet. 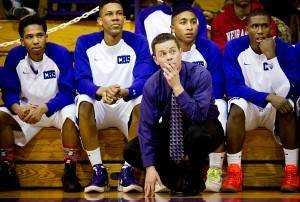 This yearˇŻs Boys State Tournament will go down as one of the finest in recent memory. 4 undefeated State Champions, and one of those schools, Omaha Central, became the first Class A school in history to win 30 games in a single season. In fact, the Eagles were the first Nebraska high school basketball team to win 30 games during a season in 62 years. The last team to do that was Class D Glenvil in 1950 when they posted a 33-0 mark, a total thatonly surpassed by the 1948 Weston team (34).

There were 5 overtime games in this years big dance, 4 of which came in ThursdsayˇŻs first round action. The other was an unforgettable 2 overtime Class D-2 final between Giltner and Howells.

The 2011/2012 season brought more comments, speculation, and interest about Omaha Central than any other ˇ°Aˇ± basketball team in recent years. The Eagles entered the tournament having won it all 5 out of the last 6 seasons. There were tags attached to this yearˇŻs squad like ˇ°Best in Nebraska High School Historyˇ±, and few sports scribes gave anybody a snowballˇŻs chance of upending the high flying Eagles. There were even those who stated that CentralˇŻs 2nd five could be rated in the Nebraska Top 10. The closest any opponent came to Omaha Central during the season was 14 points, and that was Omaha Bryan early in December. Although 4-18 Omaha NW lost the District opener 61-51 to Central after leading at halftime, the Eagles were playing without standout center, Akoy Agau that night.

Norfolk was projected by many as the only team in the tournament capable of giving the mighty Omaha Central a run, but the Panthers ran into an inspired Omaha South team and fell 64-59 in overtime. The Eagles escaped in the semis with a 56-52 win over Omaha Bryan, and pulled away from a magical team from Omaha South after trailing at halftime to win itˇŻs 3rd straight title, and 6th in 7 years. Fans from all over the state flocked to Devaney to see the fabled team. A basketball team whose high school building looks like a state capitol structure and is one of the most dazzling night sights you will ever witness. Something magical about that school.

Many folks left the Sports Center with mixed emotions about this team. There were throngs that expected to see a Harlem Globetrotters-type high school basketball team but it didnˇŻt happen. The closest they saw was the opening play alley-oop dunks to TreˇŻShawn Thurman on Thursday and Friday. There were many times the first 2 rounds that the Central players appeared uninspired some said, especially Thursday against Bryan. No urgency, taking 3 point attempts that almost appeared to be set shots. The Eagles almost looked like they were on cruise control. ˇ°What in the world were they saving their best shot for?ˇ± some fans stated.

National high school top 10 teamˇ­ˇ­no way, many said. For a fleeting moment I even wondered if my son-in-law may be sticking his neck out matching the Eagles with Oak Hill Academy in next yearˇŻs Heartland Hoops Classic in GI, but I knew better.

LetˇŻs put Omaha Central in perspective. I never recall Central coach Eric Behrens saying this team deserved to be ranked nationally. Yes, Class A basketball is arguably in a down season talent-wise, but the Eagles average margain of victory this season in this Class A was 26 points. If you are Omaha Central, you know you are going to get everybodyˇŻs best shot at state, even though you may have blasted them during the regular season. It makes no difference to me if this bunch is worthy of being rated nationally or not, but the sweet thing about that is the fact that Central will be matched up against the nationsˇŻ perennial #1 team next year in what may be the biggest high school game in the history of Nebraska high school basketball. The Eagles showed they were resiliant in crunch in every game during this yearˇŻs state tournament and got it done. Globetrotters no, but a very fine Class A team that will return almost everybody next seasonˇ­..this is a special team from a special school.

NorfolkˇŻs superb Jalen Bradley was nearly a non-factor in the Panthers opening round loss to Bryan. The bite he he suffered on his leg from a friendˇŻs pit bull two days earlier may or may not have been a factor. In all liklihood it was just excellent defense by The Bryan Bears. Nobody can deny that Bradley was a prolific scorer for Norfolk. He finished his career with an astounding 1,642 points, good enough for 5th in Class A history. Take a look at the guys ahead of him: Andre Woolridge, Erick Strickland, Kerry Trotter, and Ron Kellogg. Select companyˇ­ˇ­ˇ­Ya think?

There were a couple of other performers in ˇ°Aˇ± that were flirting with the 500 point mark entering the tournament. Lincoln North StarˇŻs #31, Keifer Musiel (6ˇŻ4ˇĺ) had 434 coming in but fell short mainly because Central put the clamps on him to the tune of 3 points in their game. Millard NorthˇŻs Josiah Gustafson, only a junior, posted 474 entering the dance but the North Star knocked ˇ®em out the first round and the slick shooter finished the season four points short of the 500 mark. After watching late Omaha Burke transfer Cameron Williams play a half season for Omaha South, IˇŻm convinced he would have nailed half a hundred points had he played the entire campaign. Williams has another year to go though.

Here is my All-Tournament team based on State Tournament performance only. And speaking of another year to goˇ­..

Next upˇ­..a review of Class B.