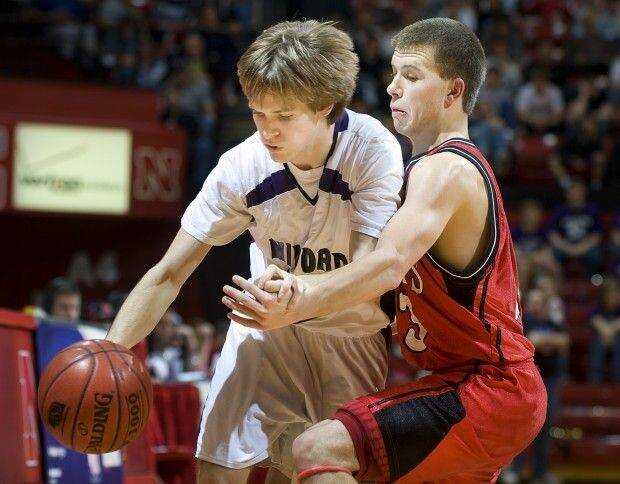 The girls had the spotlight earlier this week and next week the spotlight will be on the C and D boys basketball teams. C-1 and C-2 will go on Monday, D-1 and D-2 will follow on Tuesday. Six finals in each class with two wild cards up for grabs after the smoke clears. Here's a glance at the C-1 and C-2 final match-ups coming up on Monday:

Looks like a clash between two squads that have struggled mightly this season. Far from it. The Crusaders have lost to some awful strong ball clubs. Three times to 18-6 Wahoo Neumann, single set backs to Wahoo (22-3), Boys Town (23-1), Sutton (23-2), and Class B Lincoln Pius X (12-7), Norris and Seward. The other loss was to a good St. Cecilia (15-9) team. Fairbury began the year 4-10 and those four wins were over some weak competition. The Jeffs caught fire right before the Central Conference Tournament and won 9 of their last 12 including their last 5. Fairbury beat 7th rated Milford by 11, then 15-7 Wilber-Clatonia in overtime to advance to this district final.

The Medina brothers, Clay and Chad, lead the way for the Jeffs. Fairbury seems to play with little fear and are obviously peaking at the right time. Christian is paced by Levi Gipson, 3 point sharp-shooter Cole Dworak, and Grant Teckmeyer. Gipson is one of the best athletes in the state, regardless of class.

Take a peak at Neumann's losses: Boys Town (twice), Norfolk Catholic (18-6), Class B Omaha Gross (17-4), Class B Elkhorn South (12-9), and a Raymond Central team that played Beatrice to within 2 points. The Cav's arrived here by beating cross town rival Wahoo 53-47. Neumann has one of the best players in C-1 in Travis Ahrens. Football standout Cole Chvatal is also an outstanding hoops players and a freakishly good athlete. Lakeview ran into a rough stretch at he end of February, losing 3 of 4 in one stretch but closed the season by winning it's final 4. Sophomore Jake Shadley leads the way for the Vikings. Shadley led C-1 in passing with almost 2000 yards during the football season. Logan Paben and Preston Luedke are also key cogs in the Lakeview attack.

Clunkers: Neumann (none) -- Lakeview (none)

What I previously stated about Boys town holds true today. If all hands are on deck, nobody should touch this bunch. Way too much athleticism and one of the finest coaches in the state in Tom Krehbiel. List of key players? Pick a name. Wisner-Pilger appears to be facing an uphill battle, but stranger things have occurred. Boys Town apparently has a State Tournament berth wrapped up win or lose.......bad omen? Probably not. Wisner-Pilger won 5 of their last 6 to get here, but have a schedule dotted with too many C-2 and D-1 teams to match up favorably with the Cowboys.

Looks like a mismatch by the records, but Boone clipped Catholic 50-48 in the 1st round of the Mid-States Tournament on January 31st. The Knights won the first go around 50-36 on Dec. 16th. Norfolk Catholic is so athletic and play a menacing defense, led by junior Connor Ketter. If NC wants to get after it for 32 minutes, it's going to be difficult for anybody to match-up. Boone Central is a young squad that will kill you with their 2-3 defense. Coming from behind is not a problem for this crew. They seem to play with ice water in their veins. Who wins ther rubber match?

Oh my! 40 wins between these two and only 5 losses. The Whippets bested Valentine 51-37 in Minden back on January 7th, and again by 69-50 in the finals of the Southwest Conference Tourney. Some folks have doubted the Whippets for the past two season now, and questioned their schedule. Believe me, these guys are for real. Seniors Derek Kissinger and Carson Blum lead the way and I cannot recall when these two guys weren't on the floor for Minden. Blum is a fierce driver/3 point shooter and Kissinger is a force in the middle and next to impossible to screen. Valentine is paced by seniors Matt Harris, Marshall Miller, and James Simmons. The Badgers love to beat up on you on both sides of the ball and play a tough 2-3 match-up zone on defense. Valentine also rotates 8 players and has decent depth. Remember, Minden probably has a wild card sewn up if they lose.

Clunkers: none for either team.

Kimball was in Lincoln last year in C-1. The Longhorns beat Hershey 40-35 in December, but the Chocolates, I mean the Panthers have improved since then. Hershey has lost only twice in it's last 14 outings. Kimball opened the season with losses to class B opponents Gering and Alliance, but since has reeled off 20 wins in it's last 22 outings. Kimball had to replace all 5 starters this season, including all-stater Kendall Ferguson, but have done rather nicely in 2011/2012. Buoyed by the recent return of previously injured Trevan Hinton and Jeff Greenwood, the 'Horns are in tip top shape right now. Despite their height, they love to run on you and get the transition thing going. Hershey has been sparked by the return of Jordan Hyatt, who has missed most of this season with a horrible knee injury sustained in football. Hyatt can knock down the three. Bryson Hellmuth and James Moore are also heavy contributors for the Panthers, who hang their hats on their defense.

Clinkers: None for either team.

Here is a look at the wild card race right now in Class C-1:

Right now Wahoo and Milford are looking mighty good since they are both on the sidelines awaiting results from Monday night.