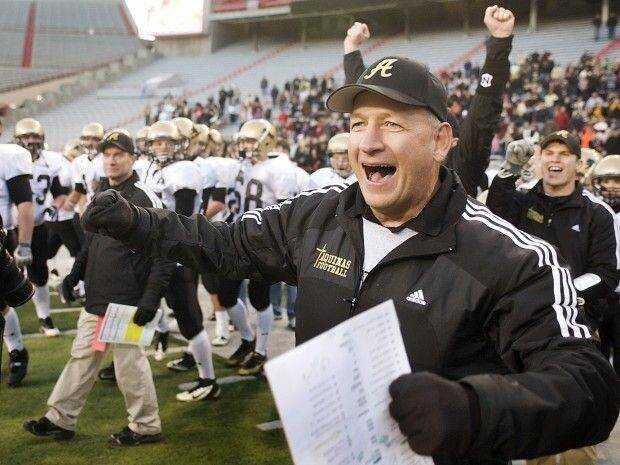 The 2011 Nebraska high school football finals and the season drew to a close Tuesday night at Memorial Stadium in Lincoln with a game for the ages. The Class a State Championship between Lincoln Southeast and Omaha Burke was one whale of a football game to behold and just to be on the sidelines to witness that baby sent shivers up your spine. Let me offer my thoughts on these 6 contests and what I observed.

This was a rematch from a year ago and Howells pummeled the Bulldogs, who were without a banged up Jed Fenske. The Bobcats cruised 46-7 and Sargent had 365 days to think about this spanking with most of their team returning for the 2011 campaign. The Bulldogs established the fact they could play with Howells physically on their opening drive by going 46 yards in 8 plays to score. A healthy Jed Fenske scored from 14 yards out, then again from 18 yards and the Bulldogs had an early 14-0 lead that they never relinquished. Do Not get me wrong, standing on the Howells sideline, I could see the Bobcats were ready to play as usual, but you could just sense the electricity from Sargent's side of the field all the way across the way. This team prepared tghe entire season for this game and there seemed to be no way anybody was going to stop them, not even the mighty Howells.

Jed Fenske rushed for 87 yards, surpassing the 2000 yard mark for the season in leading his team to their first ever State Championship in any sport. This was the final game for either team before they joined forces with another school for the 2012/2013 season. Howells leading runner, Trent Mastny (a 2,000 yard rusher a year ago) entered the game with a lingering calf injury and it dogged the fine player the entire game. Mike Speirs backup RB, Matt Gooch, who had 894 yards coming in, was eventually knocked out from the game with a hip flexor and freshman Jesse Faltys had to take over. The Bobcats, who had won nine straight 8-man state titles coming into this one made a valient comeback, but fell short as the Bulldogs realized their year long dream.

You can bet the farm my D-2 all-state team will be dotted with players from these two stalwarts.

I was so impressed with Sargent quarterback Guy Fenske, who completed 8-12 passes for 105 yards and a score, rushed for 33 yards, and absolutely punished some heads on defense by making 17 tackles. Jed Fenske topped that with 21 stops. Hearty congratulations to Sargent coach Mike Kozeal, who is one of the smartest football minds around. On the other side of the coin, Mike Speirs "ain't" too bad himself!

First of all, I would love to see WPGACC's full name scrolled across the front (or rear for that matter) of a uniform. That would an an accomplishment. At any rate, when I watched Elgin/Pope John beat Kenesaw a week ago in the semi finals, I had a hunch this team was headed for a state crown. This is not the biggest team in the world, but they know how to play football the right way and players like 5-11, 160 pound Nash Schindler play the game with such high intensity it is difficult for anyone to match it. Quarterback Ross Schindler is about as slick a signal caller as they come, playing like Houdini in the backfield with his well disguised belly fakes to the fullback. On the defensive side of the ball it had to be a blur seeing him tuck the ball into Blake Anderson's gut then wonder whether he was going to leave it or pull it back out and take off. On one occasion, Schindler faked a handoff to both cousin Nash Schindler then Anderson, stood there for a full two count with the ball hidden on his hip, then set sail around the end for a 28 yard gain.

Nash Schindler gained steam as the game progressed and finished the day with 162 yards on 22 carries. He scored on a 33 yard run a snared a 32 yard TD pass from Ross Schindler. Ross ran for 108 yards and only threw 8 times, but completed 6 of those for 97 yards and 2 scores. The Wolfpack defense was flying all over the artificial turf, led by Andrew Heithoff and Kyle Heithoff, along with the multi-talented Nash Schindler. That Elgin/Pope John "D" limited 1,894 yard rusher Nathaniel Hass to just 54 yards on 18 carries and managed to limit Bluejay quarterback Eric Weitfeld and WR Zach Weitfeld to just one score for the day. Eric Weitfeld did pass for 139 yards and Zach caught 5 passes for 99 yards, including a beautiful 49 yard TD reception in the 3rd quarter, but when it was all said and done, Elgin/Pope John outgained the defending D-1 champs by a whopping 409 to 218 total yards.

There was not one fumble or interception in this contest, but the tell-tale 3rd down conversions told a big part of the outcome when the Wolfpack converted 7 of 11, while WPGA could only find success on 4 of 14. Both squads have some key players returning for next season, especially Elgin/Pope John who returns Ross Schindler. The co-op between Elgin and Pope John is in only their second season of existence which makes this title even sweeter.

This was the one I was waiting for. Coach Ron Mimick's Monarchs swept through the season unscathed and Kearney Catholic's only loss had been to defending C-2 champ Hastings St. Cecilia on opening night. Aquinas featured a smothering defense and an offense that featured as many as TEN different backs touching the ball in most games. The Stars featured a brutal 4 linebacker defense that prided itself on physical play and an offense that had slick misdirection plays and a splendid 1000 yard runner in Anthony Pacheco. This senior class at Kearney Catholic had played together for 4 years and were top notch athletes, not only in football, but on the basketball court as well.

Aquinas' defense set up situations for the offense all afternoon, causing fumbles and pirating passes. Kearney Catholic suffered a saever setback in the 2nd quarter when QB Abe Clinch was knocked out of the game with a concussion, but the way Aquinas was playing, I still firmly believe the Monarchs would have prevailed even with Clinch in there. I still think you would be hard pressed to find a coach as well-rounded as Ronnie Mimick, who makes the game of football a total team effort and takes every situation on the field and compares it to a lesson in life, preparing his players for what lies well beyond high school football.

To illustrate how solid both of these defenses were, Aquinas could muster only 170 yards of total offense, but Kearney Catholic was held to just 143. If you were an offensive guru, this game was not for you, but if you are a connisseur of football strategy, you had to be in heaven watching Ron Mimick and Dave Colling play the chess match.

There were only 10 passes thrown in the game and turnovers and field position were paramount. Aquinas punter Seth Hoffman kept the Stars pinned back all day with his 5 punts that averaged 41.2 yards a boot. Hoffman also used his 5-10, 205 pound frame to pound ther middle of the excellent KC defense for key yards (45-12 carries). RB, Austin Svoboda also ran well, gaining 52 yards on 11 totes. Svoboda hit paydirt from 1 and 9 yards out. The stout, blitzing Monarch defense halted Anthony Pacheco to 52 yards on 19 tries. Svoboda and Jacob Bartunek did some major damage on defense for Aquinas, but the player that sparkled on that side of ther ball was Kearney Catholic linebacker Alex Lowe. I firmly believe that Lowe could start for any Class A school in the state and be a Super State linebacker. This vicious hitter, who plays at warp speed 110% of the time, had an amazing 102 solo tyackles coming into this game, plus 51 assisted stops for a ridiculous total of 255 tackles points. For good measure he added 6 quartterback sacks, intercepted 2 passes and recovered a fumble. Impressed yet?

By the way, David City Aquinas has a record of 42-15 in the playoffs since they first qualified in 1980. Rom Mimick pushed his career coaching record to an 227 wins and 102 losses.