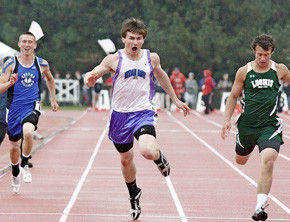 It shaped up to be a head to head battle between two of the best running back/quarterbacks in D-1 football, but the cards certainly appeared to be stacked in favor of the High Plains Storm when the teams took the field for pre-game warm-ups. High Plains is a coop between Polk, Hordville and Clarks schools and Newman Grove is a school dwindling in size and will not exist for football next season. High Plains suited up 26 players for the game and Newman Grove had 15 players trot out to the Clarks facility field for the game. It was the depth and hard hitting of the Storm that eventually took it's toll on Newman Grove as High Plains kicked it in high gear in the 2nd half to secure a crucial 42-26 D-1, District 5 win.

It was a showcase of Newman Grove's Troy McCuiston and High Plains' Tanner Fate, two versatile athletes that line up at either quarterback or running back depending on the situation. The fleet, powerful McCuiston won the rushing battle 187 to 183, but it was the slick, shifty junior, Tanner Fate that turned in a perfect 6 for 6 passing performance that sealed the deal on a night where the football weather gods smiled on on this Clarks facility with lightening, hail and tornado warnings dancing all around in every direction.

After a 3 and out by Newman Grove on the games opening drive, it took High Plains only a minute 24 seconds and four straight carries, plus 65 yards, all by Fate to stake the Storm to a 6-0 lead. Fate's 47 yard blast to the Bluejay one highlighted the series. On the next series, Newman Grove unleashed McCuiston and fashioned an 11 play drive only to be turned away on the High Plains 14 yard line. This was not the only long drive that fizzled for the 'Jays and the brutal defense of the Storm was in a "bend, but not break" mode all night, led by 300 pound monster Derek DeMers, Tanner Hannappel and sophomore, Cole Klingsporn. The Bluejays finally punched it in on a McCuiston 11 yard run with 1:09 left in the 1st and the score was knotted at 6 after 1 quarter.

Newman Grove junior Matt Finkral put his team up 12-6 with a nice 63 yard jaunt with 6:14 left in the half, but the Storn answered with a 3 yard toss from Fate to Cole Klinsporn at the 3:56 mark. It took only 3 plays for Newman Grove to run a pitch left, seal off the right side of High Plains' line and send McCuiston on a 55 yard jaunt for a score (2:49-2nd). High Plains scored with just 52 ticks left in the half when Fate found Cale Bolton in the right corner of the end zoned for an 18 yard TD strike. The teams went to the break knotted ay 20 apiece.

The second half was a tale of High Plains halting two 10 play Newman Grove drives deep in Storm territory and the great play calling of Storm head man, Greg Wood. The slippery Fate scored on a 13 yard run, then Logan Engle ran it in from the 10 in the 3rd frame to push High Plains to a 36-20 lead. In the 4th quarter, the Bluejay players were tiring, but the punting of Troy McCuiston (2-53 yarders) kept the Storm from having short fields. A back breaking 58 yard pass play from Fate to Cale Bolton with 3:04 left in the game sealed the win for the reved up High Plains squad, making it 42-20. Newman Grove did mount a 3 minute drive to close the game, with Finkral plunging in from the one with :35.4 left in the contest, but it was the Storm defense, who were constantly moving and shifting around that made life miserable for Newman Grove.

I had forgotton what a thrill it was to watch an 8-Man game on a field that was 100 feet wide. You can get right on the action on the sidelines and feel the punishing collisions and hits that these kids deliver. I had taken in an 8-Man double-header at UNK a couple of weeks back, but they did not move the sidelines in and it was played on a standard 11-man, 160 foot wide field. It would difficult to convince me that there are any harder hits than you will ever witness at a quality 8-Man football game. After watching football for over 50 years, I've seen many that rattled my bones and tonight was no exception. The 180 pound McCuiston, who gained 1,703 yards a year ago, felt the pain almost every one of his 187 yards on 36 carries. High Plains junior Tanner Fate took some of the same punishment but still mustered 183 yards on 28 tries and was a perfect 6 of 6 in the air for 106 yards. 103 of those went to Cale Bolton, who scored twice on 4 receptions.

High Plains improves to 4-2 on the year and 2-1 in district play. They have only Cedar Bluffs (0-6) and district foe Heartand (0-6) remaining on their schedule. Newman Grove falls to 4-2 and 1-1 in district play. The Bluejays have district teams, Heartland and a tough 5-1 Nebraska Christian squad left. The 'Jays are still in the hunt for a playoff, but the Heartland game next week is a must and a "W" against Christian certainly would'nt hurt.

Newman Grove's Troy McCuiston and High Plains' Tanner Fate both reached the 1000 yard rushing plateau in the game. Fate is now at 1,081 yards and McCuiston, who was a silver medalist in both the 100 and 200 last May at State Track Meet, now sits at 1,024 for the season.

*What a thrill to see Troy McCuiston's dad, Marion McCuiston at this game. I had not seen this splendid former Albion high school football/track athlete since I met him at the 1976 Shrine Bowl. Mr. McCuiston, you could live to be a hundred and still never know how much it meant to this old guy to see you again, my friend.

*Also a kick to see High Plains ADS, Andy Vrbka, who formerly coached the Storm and won a 117 games in his illustrious career and is still considered one of the "Greats" in 8-Man coaching history by his peers.