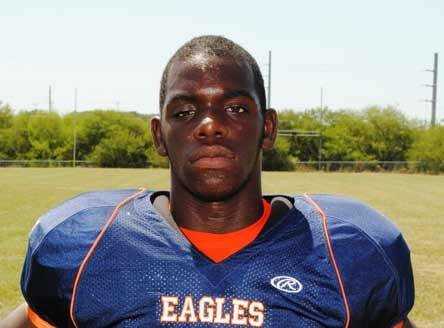 OK. It's time for colleges or even Jucos to give this young man a serious thought. I have seen every game this kid has played on film and the raw talent that exists here is indescrible. There is a link below that has a few of his highlight runs but these only scratches the surface. After 5 games, Wilkerson (5-11, 195) has , 2,209 yards on 121 carries, 46 touchdowns, and averages 18.26 yards per carry. He is averaging 442 yards rushing a contest and 9 TDs. There were two games that ended by halftime because of the 45 point rule that is enforced in Texas high school 6-man football. In two of those games that were called at the half, Wilkerson was actually tackled only twice. The few other instances he was stopped, he was simply pushed out of bounds.

Yes, this is 6-man football, but regardless of what thought process you subscribe to, football is football. Blocking, tackling, and running. It is of little consequence if there are 6, 8 or 11 players on the other side of the ball. In fact, consdering that 2 of LaJordan's games have ended 122-120 (national record) and 109-105, it takes tremendous ability to simply play that wide open a game with that kind of non-stop running. Kind of like playing an NBA basketball game employing a full court press every time down the court. No slackers on those 80 yard fields. Coach Mark Hambrick's Winston team is sitting at 5-0 with a week off to prepare a rugged district slate. Wilkerson hurt an ankle in his last game but should be at full speed in tweo weeks.

Consider the stats thus far if LaJordan Wilkerson has 5 games in the books and 5 remaining games on the schedule. Kind of simple to just double what he has now, but it is certainly possible. How would this look for a season total: 4,418 yards and 92 touchdowns.....doesn't seem possible does it?

There are not a ton of colleges knocking on LaJordan's door right now. In days gone by, coaches at the collegiate level would pluck a kid like this from a seemingly obscure high school and mold him into a champion even if he was raw. These days, with the world moving at the speed of light, colleges at any level expect high school coaches to have already done that molding. Colleges exepct these young men to step in a be ready to play as Freshman. So you say....what about junior colleges? There are many super power Juco programs that alreray have outstanding athletes on the gridiron. it's not a place for raw athletes, it's a place for already accomplished athletes to improve their classroom skills.

Take a peak at the highlight below. If you are a college or Juco football coach, this young man has to interest you. This kid is a diamond in the rough. If given the opportunity, you will be reading his name on front page sports sections all over the country. I, personally, have ate, slept, and lived football for over 50 years and this young man has all the tools needed for stardom.