Boy's State Track forecast - Classes A and B 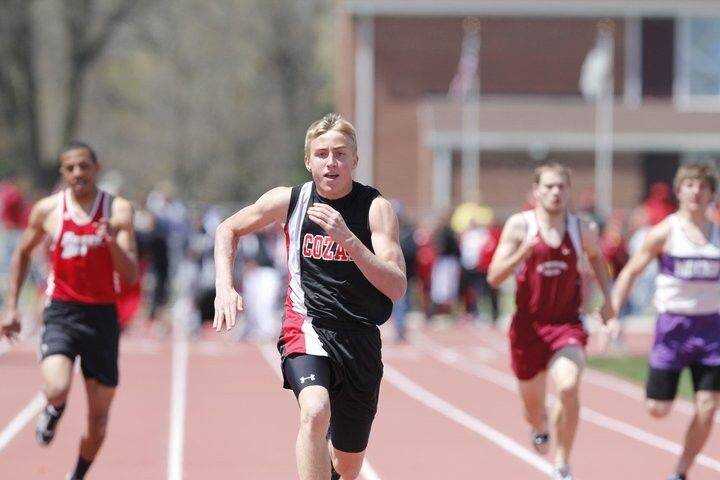 Cozad Freshman sensation, Jake Paulsen could be a shining star at Omaha Burke this weekend. (*Photo courtesy of Kelly Ninas and the Tri-City Tribune)

It's that time of year for the thin clads and some things just never change. So what else is new, the "Kings of Track" are in the title hunt for the Class A crown once again. Kearney High's boys, whom many consider a year away from being great, appear to have enough strength to edge Omaha Central for all the marbles at Omaha Burke this weekend.

I love high school track. It amuses me to no end when people say track and field is a boring sport and is for really for those athletes who may be afraid of contact sports or just aren't interested in the "team" concept. Conversely, track is one of the most unforgiving high school sports on earth. Almost every event, excepting the distance races, involve sudden, all out, top speed accelerations and bursts, that includes jumping and starting from blocks. There is no event below the 1,600 meter run that is not considered a "dash" anymore. To be absolutely candid, even the 800 is an "all out" race from start to finish. To make things worse, most top notch, excellent track and field male athletes are already beaten up from participating in football/wrestling, or football/basketball and the gals have taken a toll from the fall sports of volleyball/softball and basketball in the winter. Still, these magnificent athletes find the internal fortitude and drive to excel in the spring and put on an outstanding show at the nation's 3rd largest State Track Meet that will be staged at Omaha Burke this Friday and Saturday.

This race should be a dandy. It should all come down to the 1,600 meter relay, as it should for that dramatic finish. Ironically enough, Grand Island will be Kearney's biggest ally by winning this event because Omaha Central figures to be good enough for 2nd. Kearney figures to grab a 7th place finish in this event and nip the Eagles by ONE point and taking home the state championship by a 62-61 margin thanks in part by the Islanders preventing an Omaha Central win in that 1600 Relay. The Islanders have led this event all year and have 2 of the best 400 meter runners in the state (Sam Foltz and Will Bamesberger) to propel them to the win. Unlike previous years, the Bearcats are going to have to win it on the track. In the past, as is their tradition, Kearney usually has things sewn up after piling up points in the field events, but splendid head coach Roger Matheson has the fire power on the track to get it done in 2011.

Football 1000 yard rusher, Zach Maloley figures to win the shotput, sophomore Tim Smith could win the 3200, and 300 IH man, Jake Lundgren will battle Fremont's Braxton Voss for that win. Kearney has a history of nickel and diming you to death with 6th, 7th and 8th place points and this year is no different. Omaha Central's hopes ride on the talented shoulders of Iowa State football recruit, Ted Lampkin. Lampkin is expected to win the long and triple jumps and anchor the Eagles outstanding, if not untouchable, 400 meter relay. Lampkin should also nab a high place in the 100, and teammate Dennis Barfield could be Central's trump card if he finishes near the top in the 400 and places in the 100. If Mitch Westberry could sneak some in some points in the high jump, it would help. Fremont's strength is in the distance races and Grand Island should shine in the 400 meter dash and 1,600 meter relay, but neither team appears to have enough fire power to challenge Central or Kearney.

Here is my predicted top 10 finish in Class A:

The Cowboys of Boys Town will just be too tough to beat this year. You may be able to figure out how to get these pure athletes in football or basketball, but when it comes to track, the unbelievable athleticism of these guys is just too much to overcome one-on-one. The main cog in the Boys Town Track juggernaut is Nehemiah Wilkens. Run, Nehemiah, run.....and that he will! Wilkens is nearly unapproachable in either hurdle race and maybe the only athlete able to get him in the 100 is sensational Cozad freshman, Jake Paulsen. Paulsen has been unflappable thus far in BOTH the 100 and 200, taking on all comers and mowing them down. Many of his times have been electronic and when you're talking :10.6 in the century and :21.5 in the 200, it's spelled LEGIT, baby. Oh, and Paulsen just happens to also high jump 6'4".....and the kid doesn't have a driver's license yet.

The Cowboys should be the "Omaha Central" of this class in the 400 meter relay, getting another "W" there. Gabe Terry is a threat to nab a high finish in the 200, but it's Nehemiah the flyer that will be "da man" for Boys Town. The only scary thing about an outstanding athlete such as Wilkens, who is worth at least 30 points, is this.... if he goes down the title goes up in smoke in a heartbeat. That's track and field, though. McCook should have the forces to finish 2nd, buoyed by a 32 point outburst in the field events. Matt Chitwood unleashed a 23' 1" long jump at districts, and sophomore football ace, Jake Schlager was right on his tale with a 22' 3 ˝" leap. That duo may be good enough for 18 points in that event. Kyle Craw has just thrown his name in the ring with Minden's Craig Driver and Aurora's Beau Simmons with a district best vault of 14' 8". David City public, normally a Class C entrant, has some quality on the track with junior Brad Meusch in the hurdles, Derek Jorgensen in the 400, a potential state champ in the 800 (Matthew Unger), and a 1,600 meter team that could take it all if GI Northwest is off in that event (see districts). Adams Central has ace hurdler Nate Stein, Seward has top notch 400 and 1600 meter relays, and Cody Rush is GINW's man with his long strides in the 200 and 400. Rush has run :21.5 and :48.8 in those events and could push fellow Grand Islander Sam Foltz for the all class Gold in the quarter.

My forecast top 10 in Class B: