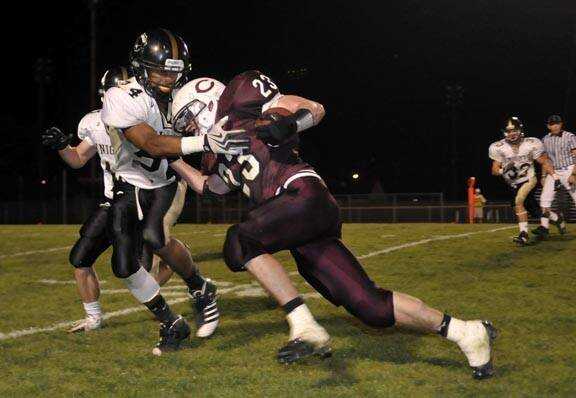 Here we go with the Holy Season (playoffs) just a week and a half away. Let's get right to the good stuff:

*Dillon Loschen-Columbus -- Pretty difficult to top what the 5-10, 180 pound do-it-all back pulled off last Friday, and Columbus needed every yard. Loschen ran 55 times for 352 yards and scored from 2, 2, 9 and 2 yards away as the Discoverers edged Lincoln Northeast 35-34. Loschen cracked the 1000 yard rushing mark with ease and is sitting at an unofficial 1,328 for the season. How does this kid do it?

*J.D. Peterson-Lincoln NE -- In that Columbus game, Peterson filled the void left by fullback Dillon Gushard, who was absent with a knee injury by gaining 187-13 carries. Peterson caught an 8 yard TD pass and escaped on long scoring runs of 74 and 80 yards then added a 1 yard touchdown for good measure.

*Tyler McKeone-Lexington -- In that Holdrege game, the nifty Minuteman signal caller threw for 339 yards on 23 of 41 passing. He also ran for 69 yards on 16 tries in the 57-29 loss. If you are keeping stats at a Lexington game you'd better have several sharp pencils and lots of legal sized sheets on hand.

*Creighton Pearse-Kearney Catholic -- Nifty quarterback shredded Wood River's "D" by completing 18 of 26 passes for 300 yards & 4 touchdowns in a 40-7 win. In the process, the Stars kept their playoff hopes alive. Drew Butler was his favorite receiver, nabbing 5 of those tosses for 97 yards and 2 scores.

*Jacob Jordan-Lincoln SW -- Junior RB rushed for 206 of the Silver Hawks 327 yards and helped his team past Kearney 26-21 in a key District 2 match-up. Jordan now has 1,128 yards on the year. Southwest quarterback Tay Bender, who gets better every week, ran for a key 20 yard TD and used his strong leg to boot 43 and 52 yard field goals in the game.

*Justin McCollough-Broken Bow -- Decided to take the rushing chores into his own hands and responded with 220 yards and scored on runs of 30 and 33 yards to lead his Indians to a 33-21 win over Valentine.

* Pat Kucera-Clarkson -- Cracked the 1000 yard rushing mark right on the nose with 160 yards on 31 carries in the Red Devil's loss to Humphrey Public. Kucera scored on runs of 35 and 6 yards.

*Calvin Frisch-Lindsay Holy Family -- Scooted for 171 yards in the Bulldogs 64-20 victory over short handed GI Heartland Lutheran. Frisch scored on a 43 yard run as the "Dogs jumped out to a huge 40-0 first quarter lead.

Eli Van Matre-Gibbon -- This Sophomore may only weigh 140 pounds but he ran like a hard running 200 pounder against GICC last Friday. Van Matre ran behind his huge line to the tune of 185 yards on a staggering 45 carries as the Buffaloes beat the Crusaders 21-14. Holy moly, what kind of magnificent job has head coach Mark McLaughlin done with this team...WOW! They are most likely headed to the C-1 playoffs. Last playoff appearance was in 2003.

*Troy McCuiston-Newman Grove -- QB ran for 233-22 carries and passed for another 48 as the Bluejays doubled the score on Hendserson Heartland, 40-20. McCuiston has rushed for 842 yards in 2010. With a win over Nebraska Christian Thursday, Newman Grove looks like they may be as high a 4 seed in the East Bracket of the D-1 playoffs, which begin next Thursday, October 28th.

*Ethan Micek-Shelby -- Relative (I think) of mine ran for 192-27 totes and scored on runs of 6, and 60 yards, returned an interception 43 yards for a score and threw a 10 yard TD pass to quarterback, Nathan Dahl. Micek now has only 10 yards to gain on the ground to hit that coveted 1000 yard mark. Boy, has Shelby ever caught fire after dropping their 1st three toughies to Giltner, Newman Grove and Friend. Since then they have won 4 straight, outscoring their foes by a 276-130 count.

*Trevor Cyboron-Ravenna -- Took a page out of the Josh Crowell "Running QB" book and dashed for 240 yards on 24 touches as Ravenna beat Blue Hill 39-27. How impressive is scoring 39 points on Blue Hill's defense? The last time anybody scored more points on the Bobcats was on October 10, 2004 when Sutton hit 41. James Kruger had 156-18 carries for Blue Hill in the Ravenna loss.

*Austin Bilstein-St. Edward -- The Beavers beat up on Santee 58-21 and Bilstein scored 7 touchdowns, rushing for 142-13 carries. His longest scoring run was 19 yards. Sounds strange, but you have to take your hats off to poor Santee, who rarely finishes a season because of the thin number of troops they have to work with. Sometimes there are victories most of us fail to see. Congrats to the Santee Warriors, you may not have won a game, but you played until the end of 2010......I'm proud.

*Chance Younger-Bertrand -- Ran for touchdown runs of 21, 13 and 45 yards & led Bertrand to a 55-19 win over Ansley. The unbeaten Vikings appear headed for a number 3 seed in the West bracket of the D-2 playoffs and are on a collision course with Eustis-Farnum it would seem.

*Logan Glendy-South Loup -- Well, there's no doubt about it, Glendy is the first 1000 yard rusher in history for South Loup. The first year co-op of Callaway/Arnold is headed to the D-1 playoffs and are unbeaten through the first 7 contests. Glendy, who played 6-Man football for Callaway last season, ran for 112 yards to push his season total to 1,052 yards in SP's 52-16 shocking win over a good Garden County team.

*Luke Glenn-Shelton -- Super Sophomore who weighs only a buck 40, raced for 243 yards on 25 carries in the Bulldog's 54-17 win over Franklin. Glenn scored on runs of 5, 7 and 54 yards. His running mate, Mitch Raasch rushed for 129-22 in the win. Glenn now has 895 yards and can go over the 1000 yard mark Thursday in Palmer in the regular season finale. My gosh, Shelton's last 1000 yarder was way back in 1992, when Matt Gangwish (now a Ravenna assistant coach) ran for 1,013 yards. The Bulldogs, who were picked to finish last in their district, will probably be playoff bound with a win over Palmer. How do you like those apples?

*Ryan Ludlow=Plattsmouth -- Tough, hard running back gained 200 yards on 33 carries in the Blue Devil's 26-12 win over Norris. Ludlow cracked the 1000 yard mark and now has 1,063 yards and becomes Plattsmouth's 7th thousand yard runner in history. Tony Wilson has the single season rushing record there with 1,587 yards in 2002.