2010 Football Players No Longer "Flying Under the Radar". 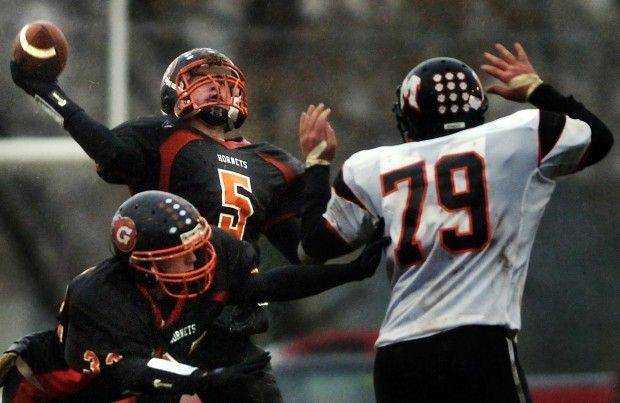 Can Giltner replace Nate Most? *photo courtesy of Journal-Star

There are players all across the state that fit this category to some degree. Some seem to go unnoticed in certain parts of the state while they are pretty familiar to opposing teams and fans in their respective areas. Then there are those "mystery" football athletes that seem to appear out of nowhere....kind of like what happens in Track and Field every year. Some of these kids have been around but just haven't had the opportunity to get ample playing time because of older players they have played behind for a while. These future news makers are just itching to get their chance and we will try to uncover some of these patient but talented players. Some are just youngsters, while others will be in their final season of competition, but they all deserve a mention nonetheless.

I'm relatively sure that most coaches would like these players to remain anonymous, but let's be a snitch and make 'em public. Some names will be "old hat" and others will come under the category "where on earth did that dude come from? Without further hesitation...............

*Cody "Action" Jackson-Hastings St. Cecilia -- Not many are going to get an abundance of playing time when you are backing up guys like Dalton Sealey. Trust on this one, Carl Tesmer will get him the ball and he will be the Bluehawks next 1000 yard man...all 160 pounds of him.

*Titus Hamilton-Omaha Christian -- Coach Tim Hamilton's son can flat out play football. His '09 season was cut short after just 3 games. Still ran for 466 yards as a sophomore and zipped for 620 as a freshman. This 180 pound dynamo just an all-around football player who had a great teacher.

* Patrick Berke-Lexington -- Not only suffered a shoulder injury in 2009, but tore an ACL as well. Don't be fooled though, this kid is a very good running back and will the go-to man in the Minuteman's backfield. Fast and shifty, it is this simple: keep him healthy and he runs for a 1000 yards, tough schedule and all.

*Shane Wright-Papillion La Vista -- OK, maybe he shouldn't be listed as "under the radar", but in mentioning his name to several people, they seemed to wonder who he was. Wright is one of the most vicious hitters in the Metro and was an all district player in '09 and will play RB for the Monarchs this fall and just may run for a thousand big ones. Don't know him now?....you will soon.

*Tom Peitz-Crofton -- This Junior RB will step into departing 1000 yard rusher, Jordan Nelson's shoes this fall. He's a big one at 5-11 and 195 and here's the other good news....the Warriors drop down to C-2 and return a dynamite offensive line. Preston Mueller (210), Nathan Hoffman (210), Andrew Tramp (195), Alec Woockman (220), and Deryk Wortmann (220) are lean and mean and will provide some big openings for Peitz and nifty QB, Christian Nohr. Run, run, run, Crofton

*Jacob Shaffer-Aurora -- This is player any coach would want on his defense. A starter since his sophomore season, Shaffer has contributed big time to the two State Championships the Huskies have bagged. Shaffer made a key interception against Beatrice 2 years ago to turn the title game around and pirated a Christian Dudzik pass and took it to the house in last year's Class B final against Skutt. Jacob Shaffer will also be an integral part of the Aurora offense this time around. I like this young man a ton.

"Ready To Step In" category:

*Ryan Bender-Adams Central -- Every season, EVERY SEASON, coach Bill Carlin has a featured back and you guessed it, Bender is 'da man. 6-1 and 200 pounds of pure football package, Bender will step into the I-Back role and most likely run for a grand. He already is an excellent linebacker that you will not care to meet in the open field, trust me.

*Kory Schaefer-Norfolk Catholic -- 200 pound runner will fill graduated 1000 yarder Kelby Seyl's spot and will do well for the always powerful Knights. No, Norfolk Catholic does not have a 1000 yard runner every season, but they do annually feature a smart, tough back that knows what to do when he gets the ball....Schaefer fits that mold.

*Ryan Mosier-Sargent -- This "kid" is 5-11, 295 and just turned old enough to drive. One heck of a blocker on offense, trying to move Moser out of the way of defense is like trying to knock down a locomotive. He'll toss you aside and eat your running back for an appetizer. All-District as a 9th grader.

*Jake Schlager-McCook -- When Coach Jeff Gross tells me something, I carve it in stone and he tells me this Sophomore RB is good. So good it reminds him of Brendan Liess. That's enough for me, how about you?

*Ryan McKeever-Omaha Skutt -- Another Sophomore RB that another wise man by the name of Coach Matt Turman has touted. McKeever may not start right off the bat, but keep a ken eye out for this guy...he has three years to make life miserable for defenses.

*Michael May-Chase County -- Yea, it's Mathew May's little brother and he is a gem. Don't let his 5-9, 145 pound frame fool you. He was all-district as a freshman as a DB and will probably step in at RB and follow those hogs in that Longhorn line. Wow, look at these sophomores!

*Sean Findley-Giltner QB -- No I'm not dumb enough to say Findley will make you forget record setting Nate Most, but this 5-10 160 lb. signal caller is as slick as they come. Have to listen to a coach like Jeff Ashby, who sports a career 126-58 record when he tells you Giltner may be just as good, if not better than last season because of Sean Findley. Watch Sean pass, watch Sean run, watch Sean score.

*Gabe Connealy-Mullen -- Hate to list him in this category, but folks in the Eastern part of the state need to know about this big fella. Here is what you need to know: 1.) 6-5, 210 pounds, 2.)great bloodlines, 3.) 2 time all-district in football, 4.)all conference in basketball, 5) defending Class D State discus champion in track, 6) Has Brownie as a football coach, 7) eats running backs, quarterbacks, wide receivers, and guards/tackles/centers for breakfast. Oh, yes and he goes by "Sir". Any other questions?

We've just barely scratched the surface here, so stay tuned for more of this before the season starts in earnest in two weeks.