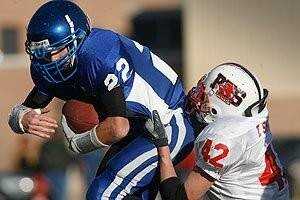 Sometimes you can just tell how good an athlete is just by the comments you hear from opposing coaches. "I'll certainly glad when he graduates", oh my gosh, does he have another year to go!", "How many years has that kid been there?" "Did he red shirt for 2 years, or what!" "One of the best all-around players I seen in 20 years".... and I've just scratched the surface of the comments I have heard when I've mentioned the name of Sean May, the multi-talented Quarterback from Wallace.

The strange thing about this deal is that Wallace played only 7 games last year, posted 1 victory had lots points scored on their defense. On the other hand their offense put up 319 points and even though the opposing average margin of victory was 62-46, coaches who saw Sean May play against their teams were still uttering these flattering comments. How can you complain about a team you scored 62 points against on average? Here's the reason why.......This 5-10, 175 pound dynamo who possesses a combination of speed, elusiveness and the ability to make opposing defenses sweat blood every time he gets a touch, is what makes him one of the best 8-Man high school football players in Class D-2.

Wallace is a town of 329 folks in Lincoln County. The school has a student population of 47, (41st out of 58 schools in Nebraska's smallest football class.) If you drive straight north about 25 miles you'll end up on I-80 in Sutherland. If you drive south and then East 65 miles, you'll be in McCook. They play kind of wide-open 8-Man football in those parts sometimes if the football numbers are slim. Up until last year, the Wildcats were a steady force the previous 7 seasons. Wallace qualified for the playoffs seven consecutive seasons from 2003-2007 and posted a sparkling 31-8 record. Sean May was involved in 2 of those seasons, but was also a part of the numbers decrease that plagued the usually strong Wallace football squad in 2009.

There are several things that impress me about this young man. First off, he has been starter at quarterback the first day he was ever eligible to play as a Freshman....and that was coming off that 31-8 streak I mentioned before. May, with the guidance of that senior class of 2006/2007 was a rock solid figure at the most important position on the football field. Not too many 9th grade youngsters have that opportunity in any size school for that chance, but Sean May seized it and despite seeing the number of his teammates decline steadily during his career, he showed improvement each season. This is what makes number 22 so impressive...shining through the tough times and getting better every season despite the cards being stacked against him.

Last year, Wallace won only once in 7 outings. A case of the swine flu hit the team before their scheduled season finale against Garden County and they were forced to forfeit. Despite winning only the one contest, the outstanding May managed to rush for 1,300 yards in just 7 games. Those yards were not compiled against subs either. Words were uttered from the opposite sidelines like "we hold out breath every time he touches the ball." Sean does it all for Wallace it seems. He may line up at QB under center, slip back into the 'Gun, line up as a wide receiver, or walk up to the scrimmage lined as a running back. Opposing coaches have confided in me that the only way to cover May is to assign a defender to a "man-to-man" type coverage all night and shadow #22 wherever he goes. Yes, sports fans, he's that kind of "good."

Sean May's rushing numbers have increased from 610 to 696 to 1,300 in 3 seasons. As a freshman he threw for 699 yards and with almost 20 players out for football in 2010, May could be able to have somebody to toss the ball to, thus opening up that Wallace offense. The more skilled players around him, the more dangerous Sean May becomes. The Wildcats have had some good runners in their day such as former Husker Josh Cobb, Daniel Swanson, speedy Andy Barner, and 1,680 yard rusher, Brett Christensen ('07). May handed the ball to Christensen in 2007 and it is a distinct possibility he may just get the opportunity to break Brett's rushing mark.

Sean May told me he wouldn't trade small town life for anything. He loves to hunt, fish and do anything outdoors. Although he is a "city boy" living right in Wallace, the country is only a half mile away. You can tell the sense of being all about community has influenced this well rounded young man. Full of personality, humility, and a drive to succeed, May is the kind of young guy you would trust your daughter to be with. Now that's quite a statement from any father. May has two brothers and a sister in his family and I'm sure there is concern because "another May boy" is getting ready to enter junior high in Wallace. Sean said he would love to play at the next level of football if the opportunity presents itself. He is a State Track qualifier in the 100, 200 and 400 and plays basketball rather well also. Sean also told me he would like to go into pre-med, Physician assisting or Anesthesiology. (yes, he spelled it correctly....smart lad!)

I study hours of football film ever year, all year, and it just so happens that this #22 from Wallace showed up on everybody's film clip's from Western Nebraska 8-Man football......I wonder why? I just shake my head in amazement when I see the maneuvers this athlete executes in the open field with his jukes and his vision. What is more unreal, is most of these accomplishments were on film clips of a Wallace team that went 1-7. My question at this point in time is this: What will transpire if Sean May gets some talent surrounding him and Wallace regains the glory they had just a few years back? Stay tuned for the 2010 version of this story and by all means.......keep close track of where number 22 in the blue uniform lines up across the line from you. You just might lose track of him in a heartbeat