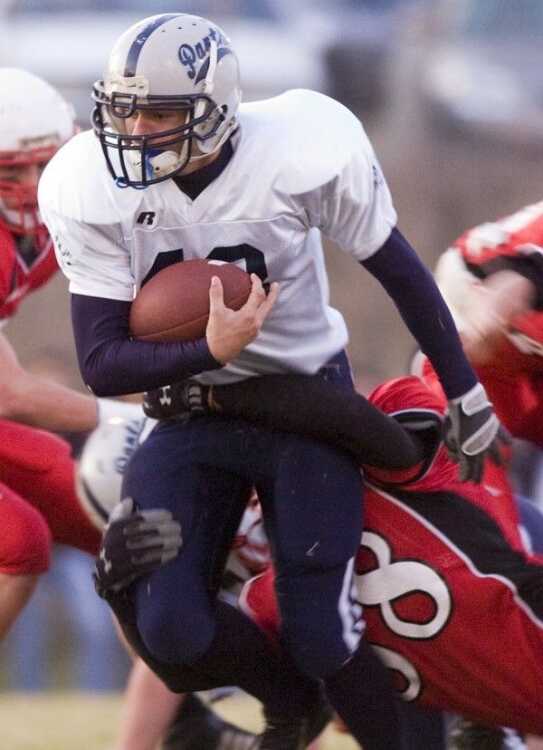 Of the 25 returning 1000 yard rushers from 2009, 14 are from the 8-Man ranks. "Par for the course" many high school football fans could speculate. Most people who have been interested in my 1000 yard club are under the impression the majority of the runners that reach that plateau are from 8-Man or 6-Man football ranks. This is simply a non truth. The Bobby Mills 1000 Yard Club has been in existence 35 years now.. During that time, there have been 2,561 backs that have rushed for over a thousand yards. Of those 2,561 running backs 1,306 have been from the 8-Man or 6-Man ranks...51%. The remaining 49% are from school who played the 11-Man version of high school football. Surprised? While one would certainly think the shorter, narrower 8-Man field would yield more yards, 35 years of stat keeping has produced other results. What may be more of a shock is that very few 6-man backs ever hit the mark because of the wide open run/pass game.

Now that we've cleared up that myth, here are the 8-Man backs you'll be reading about and hopefully watching this Fall.....and there are some fine runners indeed. These are RB's we didn't highlight in the previous article on returning thousand yard rushers:

*Steven Schmeits-Spalding/Spalding Academy -- Pretty tough customer who plays for one of the toughest football players ever to come out of that school, Troy Kleffner. Schmeits ran for 1,197 yards in '09 and will need some help to match that number this season, but he can bull for tough yards.

*Dillon Glause-Palmer -- This kid is a speedster who can hit the hole in a heartbeat and then slip to the house in a heck of a hurry. Tigers lost some key personnel, but Glause may exceed last year's 1,134 if he gets some daylight and he doesn't much..

*Clint Damme-Johnson-Brock -- These guys will be playing with a lot of passion knowing they are not eligible for the 8-Man playoffs. Last season they beat the holy living daylights out of everybody before running into the mighty Howells in the D-1 Semis. Damme rambled for 1,134 yards last season (839 in '08) and his team scored a whopping 534 points. Bad news for opponents is that JB has some key personnel returning in 2010. Look for Clint to really pad that rushing total this fall.

*Derek Eastman-Giltner -- All is not lost even thought Nate Most graduated. This 5-6, 190 lb. human bowling ball with fast wheels may just be ready to run for a thousand in 2010. Don't feel to sorry for Jeff Ashby's boys. He thinks they may be better than last season and Eastman will be one of the main reasons why.

*Heath Anderson-Axtell -- 5-7 170 pound RB/DB is one of two main returnees for the Wildcats. Anderson will get the ball a ton and after rushing for 887 in '09....that's a good thing. Anderson is one tough competitor.

*Connor Pahl-Diller-Odell -- 897 yards last season and 11 TD's and he was a Sophomore. Yea, that's good! Only 155 lbs, he caught 20 passes and had 317 yards on kick returns and was all-conference pick as a 10th grader. Diller-Odell had a nice sophomore and Junior class, so look for a big year from this kid and Diiler-Odell as a team.

*Luke Dlouhy-Deshler -- Another Junior that is a nifty runner and receiver. Dlouhy ran for 823 yds. In '09 and averaged 6 yards a pop. As a Freshman, he ran for 542 and snared 28 passes for 242 yards. Before he's finished, opponents will be praying for the day he graduates.

*Thomas Pearson-Pawnee City -- Another 155 pounder, he rushed for 755 yards for a teams that won a playoff game. Also honorable mention all-district last year and should have an excellent 2010 campaign. Doesn't possess blinding sprinter speed, but is pretty solid for his size and likes contact.

*Ben Jacobson-Newman Grove -- Oh baby, here is a pure football payer and Bill Mimick knows how to build those kind up there in Bluejay country. Jacobson is the perfect two-way player, rushing for 753 yards and 22 Tds last year including a 6 touchdown outburst against West Boyd. A vicious linebacker, he record 105 tackle points and will lead this team to good things this fall. He is a sure bet to make the Sertoma 8-Man All-Star squad as far as I'm concerned.

*Titus Hamilton-Omaha Christian Academy -- I been watching this kid since his Freshman season when he gained 620 yards before he could even drive a car.. His dad Tim is the coach (and a good one!) and Titus was poised for a breakout season as a Sophomore but went down for the year in game 3 after gaining 466 yards in just two and a half contests. This kid is good, trust me. He led the Eagles in tackles as a Freshman and considering OCA likes to run the ball a lot, I think Hamilton will be a back you will read about frequently this season. Cross your fingers the 160 pound Hamilton stays healthy, he deserves it.

*Tyke Kozeal and Jed Fenske-Sargent. Here is double-trouble magnified to the max. Kozeal will take the reigns at quarterback after filling in late last season for the injured Guy Fenske, and Jed Fenske will get the ball a whole bunch more in 2010. Fenske was good as a freshman and battered defenses for 854 yards on 166 tries last season. Kozeal rushed for 753 last season (on only 96 totes) and was also a demon on defense recording 228 tackle points. Sargent is shaping up to be a real force the West in D-2 this fall. Mike Kozeal, who was a 2 year 1000 yard rusher when he played for Sargent, is one of the better coaches I know as far as teaching solid, fundamental football. I'll guarantee you this, if Kozeal has everybody healthy, he'll figure out a way to beat you 9 times out of 10. The man is a genius.

*Jay Kindler-Alma -- As a Sophomore, Kindler became only the 2ND back in Alma's history to break the 1000 yard rushing mark and the Cardinals have had some good teams back in the day. Kindler just kind of slips and slides, following his blockers very well. May very well be a 3-year 1000 yarder and there aren't very many of those in the record books.

*Logan Glendy-South Platte -- His Callaway buddies join forces with Arnold to form South Platte and this should make a good merger. Glendy fit's the mold of past 1000 yard rushers from Callaway like Monte Birnie, Jeff Ridder, Von Grove, Casey Cozad and Rob Keeney. Glendy bulled his way for 858 yards on 205 carries last season. Expect him to top that mark in 2010.