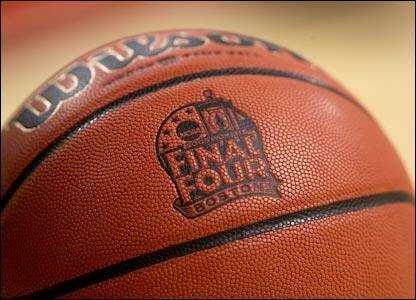 There is a first for everything, high school sports fans. Don't anyone go having a coronary here, but I'm going to do a little blogging about a couple of popular things this type of year.....College Bowl contests, and college basketball prediction contests.

First things first. The old 1000 Yard Guy is probably considered by most as a pretty vanilla guy. I do not drink, smoke, or gamble, but I dearly love to enter Bowl contests and am addicted to a site (collegehoops.com) that has a weekly contest where you pick the winner of 15 mid-major, and 15 major D-1 basketball games. No money involved, just bragging rights. I usually enter every Bowl contest on the face of the earth, scouring cyberspace for newspaper bowl contests nationwide. Not long ago I won a golf vacation to a resort in North Carolina. Good news.....free lodging for 2 nights, food, a couple of 18 hole rounds on the executive course and a free cart for both days. Bad news.....you pay your own way there. Worse news...I have degenerative disc disease and can never swing a club again. The high of winning was a real genuine kick, though.

To say bowl contests are difficult is an understatement . No home field advantage usually. Always, the same "almost impossible" questions loom: 1) Does team "A" (or team "B" for that matter) really want to be there? Example: Would Miami (Fla) enjoy that sweet trip to the Humanitarian Bowl in frigid Boise, Idaho? Humanitarian....you have to be kidding, right? 2). Will UCLA be jumping up and down in anticipation of the great weather awaiting them in Washington DC for the Eagle/Bank Bowl on December 29th? 3) After a 6-6 season, will teams like Wyoming, Texas A&M, Florida State, Minnesota, or Michagen St. be looking forward to extending their seasons another month to play in front of a sprinkling of folks and a free smorgasbord of cold cuts put on by the local ladies Eagles auxiliary?

When I peer at the never ending (and growing) list of bowl games, I present the same question I ask when I see a Millard North or Millard West line of cheerleaders/spirit set/glee club girls stretching from goal line to goal line at a high school football game....."who DOESEN'T make the squad?" College bowls are so different than doing a NCAA Hoops Bracket. By the time you get it completed, you wonder if you even care yourself, nonetheless, I trudge forward and complete my list(s). Tough gig, but somebody has to do it, but to the tune of 95 times?

Oh my, how 'bout those College basketball game each week? Well, I will let you in on a rule of thumb that I have followed for years now. I entitle it, "the roughest road on earth".

A fine gentleman by the name of Darren Everson, I believe presented a list some time ago that revealed some statistics on how difficult it was for a visiting team to win in all sports. I mean, this dude researched facts from sports around the globe and NCAA Men's D-1 College Basketball came up as the most difficult for a road team to nab a "W" on the face of the earth. Yep. The chances of a team coming away with a road win in D-1 BB..........34%. Even D-1 college football teams had a 4 in 10 chance of winning, but those smallish wooden floored rectangles they call "home courts" are anything but friendly. Advantage, big time - home team.

This tidbit of inormation has given this old guy more successes in the past than in any other sports contests. I think a home court in D-1 college hoops is worth at least 4 points....maybe more. So what makes this 34% a fact of life? Raging home crowds that taunt and drive the visiting players insane? Unfamiliar backgrounds when shooters launch those shots that are usually "money" at home? Danged if I know, but I'll guarantee you in most cases an interested hoops fan can go down the line in a weekly college D-1 basketball contest and put that "x" by the home team, you'll have a pretty good shot.

Now, with all that very valuable info passed along, does anybody have any sure-fire methods for creating that perfect Bowl Pick 'Em Contest sheet? Have the College hoops things under control, but those pesky Bowl picks. Oh yes, if you have any answers........................I'm usually home during the day.