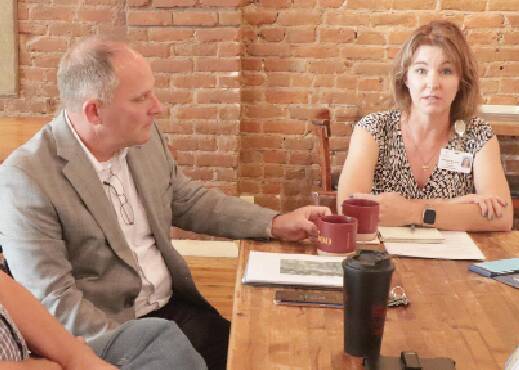 Community Hospital President and CEO Troy Brunz, left, and Community Hospital Health Foundation Executive Director Jessica Bortner were guest speakers at Wednesday’s Coffee with a Cop where they discussed the Wellness McCook Initiative and the collaborative efforts the group has begun to improve access to physical activity throughout the community.
Shary Skiles/McCook Gazette

McCOOK, Neb. – Improving the overall health of an entire community or region is not a simple task and cannot be accomplished without collaboration from many sources. That is why Community Hospital has taken the leadership role in pulling together several organizations, businesses, and individuals to team up and discuss the opportunities available to McCook residents and visitors for physical activity.

Jessica Bortner, Community Hospital Health Foundation Executive Director, along with Troy Bruntz, Community Hospital President and CEO are heading up the Wellness McCook Initiative and were the guest speakers at Wednesday’s Coffee with a Cop sponsored by McCook Gazette.

Through those discussions during the past six months, the Wellness McCook Initiative was organized. According to Brunz, the hospital has a vested interest in seeing the overall health of area residents improve.

“If we don’t do something as a nation and certainly as a community to change the way we look at health care, nobody’s going to be able to afford to access health care in the future. And we may not have a need for a hospital because nobody can afford to enter the doors.”

Brunz further explained that treating chronic conditions such as heart disease and diabetes has a huge impact on the overall cost of healthcare. Providing opportunities to improve the overall health of the community before they “go over the cliff”, will benefit everyone. “Leading the region to a healthier future,” has become the mission statement for Community Hospital.

“We’ve been measuring the health of our community in different ways for quite a while now, and what we knew was that we rank really really poorly when it comes to access to exercise opportunities within our community,” Brunz told the coffee crowd.

More than 25 percent of the McCook residents who took a recent wellness survey said they did not have access to exercise opportunities. While that leaves 74 percent of survey-takers who did feel there were ample opportunities, it is still below the state average of 84 percent. Brunz said “benchmark communities” nationally have more than 90 percent of the people who feel there are plenty of opportunities to engage in physical activities throughout their communities.

The initiative is focusing on five areas – walking trail expansion, ballparks, pickleball courts, swimming pool, and the McCook YMCA renovations and improvements. Each project functions independently, but Wellness McCook is facilitating collaboration between all of the projects from a “vision” standpoint.

Walking Trail – Bortner told the group that the walking trail appeals to many residents of all ages and physical capability. The current trail, initiated in 2006 and expanded around 2010, is approximately 1.5 miles that wander through Kelley Park. Wellness McCook is in the very preliminary stages of identifying a possible route to provide more walking opportunities in the community.

The group has identified a possible trail along North Highway 83, in part because it also solves some safety concerns. The trail would be eight feet wide on the east side and run north from West “B” Street up to “Q” Street. It would provide a pedestrian crossing around “J” Street because there is not currently a good way to get across North Highway 83 on foot or via bicycle. On the west side of the highway, walkers would be able to meander through the Prairie Arboretum owned by The Norris Institute.

Ball fields – Discussions have begun about the possibility of building new ball fields. The key stakeholders in the ball fields have been brought together to collaborate on the needs through the Wellness McCook Initiative. That includes the schools, college, YMCA, leagues, and traveling club participants. The current ballfield, located at the Jaycee Complex, was built in the 1970s and doesn’t meet the needs for the variety of teams currently playing in the community, nor the need for practice fields. In addition, four fields would be necessary to host any state or regional tournaments, which could have a significant economic impact on the community.

Swimming Pool – the city is currently gathering survey information from the community to identify the future needs for a swimming pool, including amenities, location, and funding. It’s not just about providing a better pool. The current facility may not be operable as early as next summer, so the question becomes if McCook will offer a public pool to its residents.

The survey is online at https://bit.ly/2VwtVqw , or available in hard copy at the Senior Center or City Library.

Pickleball – McCook currently has two dedicated outdoor pickleball courts at Russel Park. Enthusiasts also utilize the Elks tennis courts by using tape to mark the court. The McCook YMCA has pickleball courts that are regularly full. The goal is to have more courts available for the fast-growing sport and tournaments could be organized. The group would also like to have access to more indoor courts so they can play year-round. Pickleball is played by residents of all generations from the youngest to the oldest.

YMCA – is currently going through a building analysis and a visioning process to determine the best path forward. The current facility was built in the 1980s and several challenges have been identified.

Brunz challenged those in attendance Wednesday to consider where McCook will be five years from now. “We currently have a pool. We have some trails. We have very few fields. But if we don’t do something, where will we be five years from now?” He also pointed out that to develop a strong workforce in the area, amenities such as those being proposed, make McCook more competitive as a place to live and work. “To succeed in the growing competition for a shrinking workforce across the entire country this becomes essential. More people are leaving the workforce than entering the workforce due to the aging of America and that gap will only grow for years to come.”

Brunz said that a certain amount of money has already been “pledged or planned” for these projects, although he admits that it isn’t enough. Because Wellness McCook provides a collaboration of many organizations and individuals, private and public grant funding is much more likely than if any of those organizations tried to apply alone. While the collaboration can cause some complexity, that complexity can make the entire initiative more successful.

In the near future, the initiative will prepare a document that further details the plans for improving the overall health of the community. Once costs are estimated, the group will begin to look at funding sources which will include both private and public dollars. Donations will come from within the community, but there are also considerable funds available from outside sources that will be solicited.

Bortner highlighted an impressive number of groups that have been engaged in the initiative, including McCook Chamber of Commerce, McCook Public Schools, City of McCook, McCook Economic Development, Community Hospital, McCook Community College, McCook YMCA, McCook Pickleball Group, The Norris Institute, and McCook Community Foundation Fund, as well as several business owners. Bortner encourages anyone who would like to become involved in the collaboration to contact her at 308.344.7222.