SWNPHD: Be patient about COVID vaccines

McCOOK, Neb. -- With state officials worried holiday gatherings will result in a spike in COVID-19 cases in the coming days, the Southwest Nebraska Public Health Department is working with state and local public health officials and healthcare providers to distribute the recently approved vaccines.

“We are asking the public to stop calling healthcare facilities and health departments in search of the vaccine,” according to a SWNPHD release. “Instead, wait patiently while the vaccine is distributed utilizing the federal guidelines. 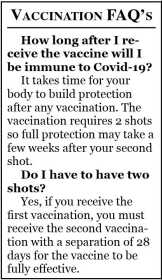 Frontline workers are most likely to be exposed to positive individuals, and long-term care residents are most at risk for severe illness from COVID-19. SWNPHD is working with local public health partners to complete Phase 1A with an anticipated completion date of January 9th.

Phase 1B will launch as Phase 1A nears completion. The vaccine is not available to the public at this time nor is anticipated until March or April at the earliest. Further information will become available with each phase when enough vaccine is available, according to the SWNPHD release.

State officials are urging residents to avoid New Year’s parties and public gatherings in bars that could lead to more virus cases.

“If there are a fair amount of infected people in close environments, there will be an uptick in activity starting about a week or week and a half after New Year’s,” said Dr. David Quimby, CHI Health infectious disease specialist.

The state’s virus numbers have been improving since early this month when Nebraska ranked with the fifth-highest rate of new cases in the nation.

As of Sunday, the state had the 33rd-highest rate of infection, according to data from Johns Hopkins University.

The COVID-19 Community Risk Dial for the week of Dec. 28 remains at orange, meaning residents of Southwest Nebraska have a high risk of contracting COVID-19. Testing is available but may require travel, and healthcare systems are burdened but capable of caring for the number of people hospitalized for COVID-19.

Orange level recommendations include wearing a mask in public, washing hands and surfaces often, limiting travel and working from home when possible. High-risk and vulnerable individuals should avoid public places.