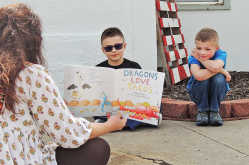 Kim Johnson, a second grade teacher at McCook Elementary, makes a stop to the home of Caden Rowe, 9, from left and Baxter Rowe, 5, to read a book, while sitting 6 feet away. Johnson and other teachers have been trying to keep in touch with students since McCook Schools closed due to the CORONA-19 virus. A bee was more of a concern than a virus on Monday’s visit.
Lorri Sughroue/McCook Gazette
Order this photo

McCOOK, Neb.—McCook Public Schools, as well as hundreds of schools around the U.S., have closed due to the COVID-19 pandemic, so teachers, students and parents are relying solely on digital platforms and “outside the box” thinking to teach.

Centers for Disease Control and Prevention, along with federal and state officials, have recommended no gatherings larger than 10 people and to practice “social distancing” of six feet to contain the spread of the virus.

McCook Public Schools first closed on March 16 and will remained closed until April 13. It rolled out its e-learning on Tuesday that uses every kind of online approach available, such as school websites, Google classrooms, zoom live streaming, Youtube videos, Facebook pages and other Internet tools. Laptops are being checked out to parents on a daily basis and a WiFi “hotspot” has been designated in front of McCook High School. Communication companies in the area have also offered free Internet service to households without a connection.

It’s still uncharted territory for everyone. “It’s been hard because we all got into education because we love kids…and now the kids aren’t here,” said Joel Bednar, Central Elementary principal. McCook Junior High principal Chad Lyons admitted the deserted halls and classrooms at his school were disconcerting.

“It’s been challenging. I walk up and down the hallways and there are no students,” he said.

Keeping that personal touch as been especially challenging for the younger grades, where students use very little technology and are more reliant on the teacher/student relationship. “It’s an awful position to be in, trying to keep a connection with the kids,” said Kim Johnson, second grade teacher at McCook Elementary. Johnson, along with other teachers, has been using Facebook to connect with students but she decided to take it a step further and read to students in person — staying six feet away, of course.

“It was a little weird, I’m used to hugging them, but I think they enjoyed it,” Johnson said of her recent visit to Caden and Baxter Rowe.

Their parents, Kyle and Sara Rowe, are grateful for the visit. “It’s wonderful, the kids miss having other people to talk to,” Kyle said.

It’s also been an adjustment for parents teaching the kids at home, he said, as they’re not used to scheduling certain times for academics. But the personal visit by Johnson was much better than Skype, he said. “It’s spectacular what the teachers are doing for us,” Rowe added.

It’s been a work of progress for everyone in retaining a semblance of school, without being in school. Parents are adjusting well, given the circumstances, said Greg Borland, McCook Elementary principal. “We’ve reached out to them for feedback, to see where we can help,” he said, with the “unknowns” being the biggest hurdle. His staff is aware that not every parent is comfortable with e-learning and not every kid will act like a student at home, he said. At McCook Elementary, Borland said teachers are combining e-learning - a website for McCook students in kindergarten through fifth grade, where parents can click on a specific grade level for activities - with “old school” learning of packets full of papers that parents pick up at the school.

Given the swiftness of the mandatory e-learning, he had nothing but kudos for his staff. “They really stepped it up and knocked it out of the park,” Borland said.

The highest hurdle has been in trying to find ways to keep the teacher/student relationship strong, Borland said, and “teachers have been making a concerted effort to do that.” This has included personal phone calls to students, interacting with students via Facebook and waving to students if they see them in a car.

For McCook School District’s oldest students at the high school, e-learning is less of a challenge. That’s because at that level, students are already using it on a daily basis, said MHS principal Jeff Gross, with an online management program where students get and return assignments and interact with their teachers.

Still, “normalcy has been taken away from the kids,” Gross said. While Google classrooms have been working well for some classes, there are some subjects, like band and woodworking, where it’s been more difficult, he said.

Abbey McNutt, 6-12 vocal music teacher, has joined several online groups for teaching choir through e-learning, such as “Choir Practice Bingo,” where students pick different squares to complete that involve music or singing in some capacity. Students have to document their task either through video or in a written document and turn the tasks into McNutt once completed. “It’s certainly not ideal and I’ve had to get creative,” she said. Deb Goodenberger, art teacher for K-8th grade, has set up a link to a secure site where students can share their projects. “I’m hoping to get students looking and talking with each other,” she said. And Jake Curl, industrial technology and woodworking teacher at the high school, has posted YouTube videos for students to learn and review skills for their projects and uses the Google classroom platform to assign coursework.

Students aren’t slacking, either. “I think many teachers around the county thought, ‘I don’t expect anybody to actually do the work,’ but I find that most of my students are completing the activities and watching the videos I created, which is an awesome feat in my mind,” said band director, MHS Nathan Hudson. He’s posting videos on YouTube for students to follow along, giving them small assignments along the way.

It’s not the same as the classroom but teachers still feel a responsibility for student learning, said Chad Lyons at the McCook Junior High. “Teachers still have to stimulate the students thinking process,” he said. “We just can’t stop, it’s not fair for the kids, so we’re doing all we can to get kids prepared for the next grade level.” At the junior high, as well as at the other schools, teachers get together in small groups and brainstorm activities that will interest students and encourage them to participate. Sixth grade math teachers are having students play math games online, with students posting their scores to spur competition. Science, English and reading teachers are combining activities and having students write commercials on weather and climate.

Even cheerleading tryouts are being done online. Videos were posted online for the girls to watch, said sponsor, Teresa Erickson, a teacher at McCook Junior High. Students have two weeks to learn the material and will be judged based on the video they submit of themselves performing the cheers and school song.

Plans for prom and high school graduation are still not canceled but may be postponed to a later date. What that actual date will be is still to be determined, said McCook Schools superintendent, Grant Norgaard. “I’d love to be able to say we’ll have it at a certain date but I can’t right now,” he said. “We’ll pay attention and monitor conditions and see what the CDC and the state is recommending,” he said Monday.

Although e-learning is filling in the gaps for teachers and students, it can’t replace the traditional classroom. That was apparent to McCook principal Greg Borland, who said he can’t help but see the wistfulness in student faces when they come to the school with their parents to pick up their packets. “You can tell they want to be back here,” he said.