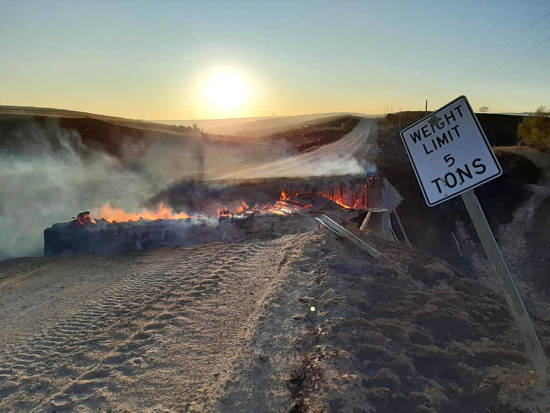 A rural bridge was destroyed in Monday's fire.
Courtesy photo

HERNDON, Kan. — Wind gusts up to 55 miles an hour kept a grass fire moving at break-neck speeds through pasture grass, trees and a creek bottom northwest of Herndon Monday afternoon and evening.

Kelsey Wahrman, the secretary and a firefighter with Rawlins County Fire District No. 1, said this morning that a grass fire pushed by high winds is one of her worst fears, and that she and her husband talked about that possibility about an hour before a fast-moving grass fire spread from a burning combine working in a field along County Road 314.

"In dry weather like this, it doesn't take much to get a fire started," Kelsey said. And the situation was only made worse by strong, gusty winds. "The wind is why this fire went as far as it did," she said.

Firefighters were called out at 10 minutes 'til 2 and, Kelsey said, they felt they had the fire mostly under control about dark. However, the fire will burn and smolder for a long time in the trees and underbrush along the Beaver Creek bottom. "We'll just have to keep it contained, and keep a watchful eye on it," she said.

Mutual aid to fight the fire — beginning to cover lots of ground easily — arrived from Oberlin/Decatur County, Thomas and Cheyenne counties, Atwood Rural and Bird City, Colby, Brewster, Goodland and St. Fransis, McDonald in Kansas, and from Trenton, Culbertson, Red Willow Rural and Beaver Valley in Nebraska. Neighbors helped where they could, Kelsey said. "So many showed up to help, and we really appreciate it," she said.

County roads in the immediate vicinity were closed due to poor visibility. Smoke from the fast-track fire could be seen as far as McCook and Indianola on the northeast and as far as Trego County on the southeast.

Kelsey said they aren't sure how many acres are involved; they haven't seen it all in the daylight, she said. She does know that two old railroad bridges and one county bridge on Road 314 burned. "This bridge is on one of our major county roads," Kelsey said, and it's closed until the bridge can be replaced.

As far as firefighters know right now, there were no homes or structures involved. There were no injuries, Kelsey said.

Kelsey and her fellow firefighters are hoping for a better day today, because winds aren't predicted to reach the same velocity. She's cautious, however. "With trees still burning, it'll just take one ember" for the fire to flare-up and take off again," she said.