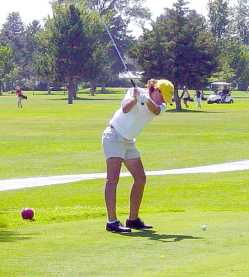 Katherine Morell teeing of on the 17th hole of the North Platte Invite. Katherine wins the first place medal with a 71, 12 strokes better than the 2nd place medalist. (Wayne Nelson)

She won the title by 12 strokes over Lexington's Erin Ondrak and Scottsbluff's Britanny Pepler, who tied with 83s. Ondrak defeated Pepler in a playoff for second place.

Ironically, it was Pepler who edged out Morell by two strokes to place first at Sidney Thursday.

The Bison girls golf team placed second with a 387 score. Scottsbluff won the team title with a 362 score.

Theiler defeated Keiser in a playoff for the fifth-place medal.

McCook competes at the Lexington Invitational at 9:30 a.m. Sept. 10.