'Centrist' Ben Nelson 'takes colleagues to task, shows how to save the institution' 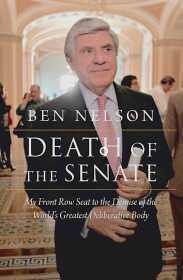 LINCOLN, Neb. — With polarization at its worst in decades, and every day a new fight over filibusters, infrastructure or reconciliation, the U.S. Senate is on a self-destructive path. But Ben Nelson, former U.S. senator from Nebraska, is not going to let the institution destroy itself without a fight. His new book, Death of the Senate, published by Potomac Books on Sept. 1, is a “clear-eyed look inside the Senate chamber and a brutally honest account of the current political reality.”

“I served at a time the Senate worked, there are lessons to learn that can help restore the Senate,” Senator Nelson writes. “Why does that matter? If the Senate cannot work effectively for the American people, then the government doesn’t work. And if the Senate cannot serve as a responsible, credible check on the powers of the President—as it was meant to be—then our democracy can’t work. If our democracy can’t work, our country will decline, and our people will suffer. There’s a lot on the line in getting the Senate to function again.”

In his two terms as a Democratic senator from the red state of Nebraska, Nelson operated as a moderate broker between his more liberal and conservative colleagues and became a frontline player in the most consequential fights of the Bush and Obama years. His trusted centrist position gave him a unique perch from which to participate in some of the last great rounds of bipartisan cooperation, such as the “Gang of 14” that considered nominees for the federal bench—and passed over a young lawyer named Brett Kavanaugh for being too partisan.

Nelson learned early on that the key to any negotiation at any level is genuine trust. With humor, insight, and firsthand details, Nelson makes the case that the “heart of the deal” is critical and describes how he focused on this during his time in the Senate.

Harry Reid, former U.S. Senate Democratic leader from Nevada, says, “Ben Nelson’s book has never been more timely or necessary. With sharp insight, honesty, and wit he takes readers inside the United States Senate to reveal how this bulwark of our democracy worked well not so long ago. Nelson traces its fall into partisan division and rancor and outlines how we all can restore the Senate—through bipartisanship, courtesy, and a willingness to see past each other’s differences, for the benefit of all Americans.”

Ben Nelson, a native of McCook, Neb., is a politician, businessman, and lawyer who served as the thirty–seventh governor of Nebraska from 1991 to 1999 and as a United States senator from Nebraska from 2001 to 2013.