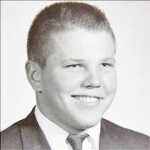 CULBERTSON, Beb. — William Henry Welsh, 76, of Culbertson, was taken to his heavenly home on Tuesday, April 27, 2021, in Culbertson, after a long fought battle from cancer.

Willie was raised on the farm. He loved the outdoors and animals, exploring the South Platte river behind the family home, hunting and fishing, spending much time at the lake.

He married Sharon Packard of Arthur in September of 1965 and to this union, two sons were born, Michael and Paul. Everyone knew William as “Willie” and he didn’t know a stranger. He might not have known your name but he still knew you.

Willie worked at TRW in Ogallala and transferred to McCook in 1967. Shortly after, went to work at Electric Hose and Rubber after it was built and operating in McCook. Later he went to work for Kugler Oil Co in Culbertson at the fertilizer plant. Willie was always busy delivering propane for Malleck Oil when needed. He helped farmers and other folks in the Culbertson area which in turn  became lifelong friends of the family. He will be truly missed by all.

Willie was preceded in death by brothers, Don and Rex; son, Paul; parents; in-laws; and other relatives and friends.

A memorial has been established in Willie’s memory for later designation. Condolences may be shared at Trinity United Methodist Church or prairiehillsfuneralhome.com.

Prairie Hills Funeral Home of Ogallala is in charge of the arrangements.