City willing to lease, not sell B Street property 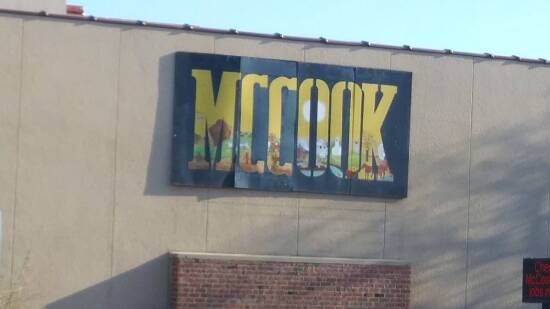 The origins of the “McCook” sign on the side of Richard Haag’s building on Norris Avenue are still up in the air. City staff has no record of where the sign came from, although City Manager Nate Schneider said at Monday night’s City Council meeting that he received a call from someone who said the sign was the result of a McCook Jaycees contest in the 1970s. The panel of judges couldn’t decide on a definitive winner and instead incorporated all the entries from the contest into one sign. McCook citizen Sharon Bohling told the council Monday night that she talked to a former McCook High School art teacher who told her it was created by him and his art students. Haag expressed concern at the March 15 council meeting that it could be a liability for him if the sign were to fall off.
Bruce Crosby/McCook Gazette
Order this photo

McCOOK, Neb. — Although not wanting to sell it, the McCook City Council is willing to work with a local businessman on leasing city property in the downtown area.

Richard Haag’s business building abuts city property on Norris Avenue and B Street. The property is currently being used as a “green space” and was originally gifted to the city by the Larry Burns family in the 1970s for a “mini-park.” Haag requested at the March 15 council meeting to buy or lease the property so he could use it for vendors related to his western wear store, as well as for other vendors.

Councilman Gene Weedin said Monday night that he and Mayor Mike Gonzales had discussed the matter and likened the request to others the city gets to close streets for special events, such as those from the chamber. He wondered if the city could do the same thing for Haag, such as allowing booths on that property on certain days.

“I’ve had people tell me not to sell it, but I don’t want to hinder Haag’s business,” Weedin said.

City Manager Nate Schneider said with city council approval, the property could be leased, as long as the lessee provides a certificate of insurance so there wouldn’t be a liability to the city.

There could also be restricted covenants such as those that “run with the land” and could cover such things as vegetation. Currently, there are trees, shrubs, perennials and a walkway on the property.

Mayor Mike Gonzales said he agreed with Weedin on leasing instead of selling the property. The property was gifted to the city with the stipulation to use it as a mini-park and as such, it should be used in the way the gift intended, he said.

Councilman Darcy Rambali asked if Haag is allowed to rent the property if other businesses could rent it as well. Schneider said the council could restrict the use of the property or open it up to others, depending on the request and if area businesses are notified of the request as a courtesy.

Mayor Gonzales asked city staff to bring back an action item on this request that the council can vote on at a future meeting.