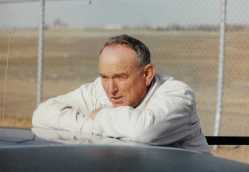 Lloyd was born June 23, 1932 in Hayes County to parents Albert James and Maude Effie (Snoke) Lacey. He was one of five siblings who grew up in Hayes County where he also attended school. Lloyd graduated with the Class of 1951.

Following high school, Lloyd joined the United States Army on Dec. 2, 1952, proudly serving our country in Korea. He was honorably discharged on Sept. 18, 1954. At that time, he returned to the family farm and married Karen (McBrien) Lacey on Febr. 11, 1961. Together they raised three children, Dana, Sean and Jason. Lloyd was an avid hunter and enjoyed Husker and Denver Bronco football. In the past six years, his new hobby was enjoying his 13 great grandchildren whenever they came to visit.

Lloyd was a member of the American Legion, the Hayes Country School Board, the McCook Elks Club and the local trap shooting league.

Visitation, with family greeting friends, will be held Thursday, Nov. 14, 2019 from 5 to 7 p.m. at Carpenter Breland Funeral Home in McCook.

Burial with military honors will follow in the Highland Cemetery, rural Hayes County.

Carpenter Breland Funeral Home of McCook has been entrusted with the arrangements. Please visit the website at www.carpenterbreland.com to sign the online guestbook for the family.