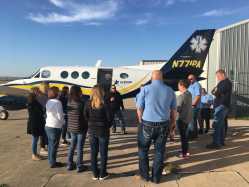 Members began the day learning about aspects of the Ben Nelson Regional Airport by visiting J and S Aviation, a fixed-based operator at the airport. They also learned about LifeSave Transport an air and ground transport for critically ill or injured patients to advanced care, which is also based at the McCook airport.

Members enjoyed lunch provided by the McCook Public Power District as they learned about rural electricity needs and toured the headquarters. Next on the day’s tour was a trip to the McCook Nebraska Department of Transportation office. The group learned how this year’s spring floods in eastern Nebraska have affected budgeting of all Nebraska road projects and saw photos of the devastation. Last for the day was a trip to Hometown Family Radio to learn more about the radio industry and spend some time live on the radio.

Some time was also spent on initial planning of the class project. The group is very interested in the future development of Norris Alley and as a project, would like to help market and bring awareness to the community during Phase 1 and 2 of Norris Alley. Norris Alley has been designed as a premier gathering space which honors Senator Norris. The current undeveloped space is located between the Fox Theatre and Keystone Hotel. The venue, once completed, will transform into a unique, culturally rich space that can capture life’s most treasured moments, such as receptions, holiday parties, business meetings and fundraising events while fulfilling family and business needs.

The mission of the Southwest Nebraska Leadership Institute is to develop effective leaders from every section of our area who desire to strengthen and contribute to the high quality of life in Southwest Nebraska.