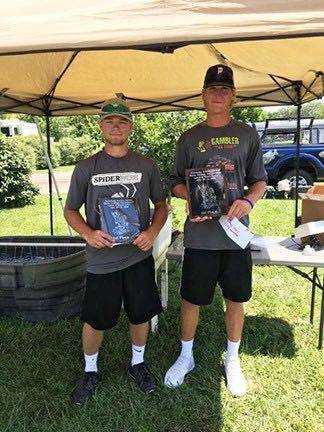 Dylan Petersen (left) and Grant Pavelka hold up the awards they won at the 2018 Nebraska B.A.S.S. Nation College State Tournament at Lewis and Clark Lake. It was the first tournament win for the MPCC Fishing Club.
Courtesy Photo

b. — The Mid-Plains Community College Fishing Club won its first tournament over the weekend and is now qualified for nationals.

Members Grant Pavelka and Dylan Petersen, both of North Platte, competed in the 2018 Nebraska B.A.S.S. Nation College State Tournament at Lewis and Clark Lake north of Crofton on Friday and Saturday.

They fished for largemouth and smallmouth bass and had a five-fish limit. Weights from both days were added to determine a winner.

“We caught 10.73 pounds of fish on Friday and 7.54 pounds on Saturday,” said Pavelka. “The second place team had a two-day total of 10.74 pounds. So, if we wouldn’t have caught anything on the second day, they would have beaten us by one one-hundredth of an ounce.”

Creighton University and the University of Nebraska–Lincoln were among the other teams MPCC was up against.

“It was a grind,” Pavelka said. “It was really, really tough. We usually don’t enter tournaments in July because the water gets too hot. For comparison, a winning one-day weight in Nebraska is typically around 17-21 pounds, and our two-day total was just over 18 pounds.”

He and Petersen even went early to prepare – casting their lines on Wednesday, ahead of the tournament.

“We fished for an hour before we were rained off the lake,” Pavelka said. “On Thursday, we were blown off the lake, so we didn’t really have a chance to practice.”

Fortunately, Pavelka was somewhat familiar with the area. He won a high school state championship at the lake in 2015.

“We just decided to try what I had success with the last time I was there,” Pavelka said. “We used a soft plastic topwater bait and set up in a bay that had a history of having big fish in it.”

“It was a great experience,” Petersen said. “We ended up catching our limit both days and had a really good time in the process.”

“ It’s especially cool because the MPCC Fishing Club has only been in existence for a little over a year. I’m thankful that the college was open-minded about the idea of starting the club, and I hope we can continue to use it to put MPCC on the map.”

Pavelka and Petersen are now qualified to compete in the 2019 Carhartt Bassmaster College Series National Championship. The date and location of the tournament have yet to be announced.

Watch for more details next week.