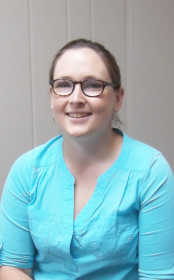 McCOOK — Red Willow County’s newest extension educator is an example of the life-changing influence that 4-H can have on the career choices of members.

Born and raised an hour north of New York City — in Westchester County — Katherine “Kat” Caswell became involved in 4-H at a young age, inspiring her to major in agriculture in college and to pursue employment in the ag field following graduation.

The journey — starting with 4-H participation throughout New York State — led to studies at Penn State University, where Kat received a Bachelor of Science degree in ag science and a Master’s degree in agronomy science.

From there, Kat headed west, taking a position at Colorado State University as a specialist in cover crops and grazing.

This set the stage for her move to Red Willow County, where she becomes the assistant extension educator for cropping systems, replacing Robert Tigner, who still lives in McCook but is now working out of North Platte.

Kat, who started her duties in this area July 1, says she really likes it here and is poised to assist with cropping issues, including forage quality, weed control and animal performance.

Having grown up in the “dairy country” of New York, the new assistant extension agent said conditions are much different here. “That’s especially true for rainfall,” she said, pointing out the problem in New York and Pennsylvania was “too much water,” while here the concern is “too little.”

Whatever the concern is about cropping systems, Kat urges farmers, ranchers and homeowners to contact her.