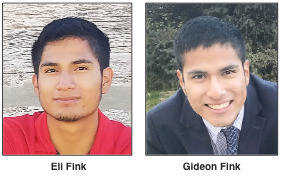 Nebraska U.S. Senators Ben Sasse and Deb Fischer have nominated Eli and Gideon Fink of Stratton for admission in more than one academy. The boys are the sons of Renee and Kevin Fink of Stratton.

Eli has been nominated to attend the U.S. Air Force Academy, where he plans to study cyber operations.

Gideon has been nominated to attend the U.S. Merchant Marine Academy, the U.S. Naval Academy and the U.S. Coast Guard Academy.

The brothers told the Benkelman Post and News Chronicle that they started the nomination application process before their junior years in high school. The process includes writing essays and interviewing before a panel of military personnel.

— Read a feature story about the twins in Thursday’s Gazette, or click here.