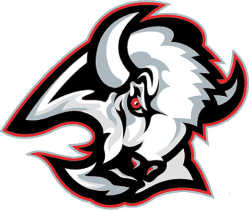 After a string of slow starts to close out the regular season, the McCook Bison came roaring out the gates for a 48-7 win over Grand Island Northwest in the opening round of the Class B playoffs.

"It was a dominating start," said Bison head coach Jeff Gross. "We just came at them and slugged them."

"Slugged them" may be an understatement. What the Bison did in the first quarter would qualify more as haymaker after haymaker.

After a Northwest three-and-out to start the game, it took the Bison one play to score on its first offensive series. Zach Schlager took an option read and scampered 47-yard for the game's opening points just 1:20 into the contest.

"Our offensive line, man, I've gotta give credit to them," Schlager said. "They got Northwest off the ball, opened up holes, and we just made plays."

McCook took advantage of short field position on its next drive. Following a Vikings turnover on downs, the Bison struck two plays later on a 20-yard run by Dunncan Rogers. Trae Koetter's point after kick was good, making it 14-0 Bison with 8:13 left in the first quarter. 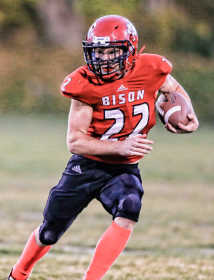 Dunncan Rogers had a game-high 17 carries for 109 yards and three touchdowns to lead the Bison to a 48-7 win over Northwest Friday night at Weiland Field. Photo by Steve Towery/McCook Gazette.
Order this photo

The Bison would extend their lead to 21-0 on their next offensive possession. Rogers capped a 10-play, 62-yard drive with his second touchdown run of the night with 2:37 remaining in the opening stanza.

By the time Rogers scored his third rushing touchdown with 5:55 remaining in the half, the Bison were well on their way to victory.

And it was because of the work paved by the offensive line, according to Gross.

"We challenged our offensive line to control the game," he said. "You're as good as your offensive line takes you. That's why we were so dominant to build that 27-0 lead. That was huge momentum boost. We've got great backs, but it's such an easy job when the hole's there. It makes it a lot easier."

McCook, however,ended the half on a sour note, when Northwest's Carter Terry found Tanner Lierman for a 33-yard touchdown pass as time expired.

"There were some ups and downs," Gross acknowledged. "We got a little sloppy because we lost some mental focus but it's hard to keep that when you're beating someone 27-0."

The Bison would regain their mojo with two third-quarter touchdowns. Schlager found paydirt for the second time with 3:43 left in the quarter, then Gabe Sehnert returned an interception 75 yards for a score with just 25 seconds left in the period.

With a steady stream of reserves coming in, the Bison got its final points off a 54-yard run by Paxton Terry in the fourth quarter.

As the final seconds ticked off the game clock, it was announced that No. 12-seed Blair had upset No. 5 Scottsbluff 38-35. That means the Bison will be making the 300-mile trip to Washington County next Friday for their second visit in three years.

"We're excited we get to play somebody new," Gross said. "The beauty of it is, if you get through Blair, you're gonna get another game at home in the semifinals. All of our focus and everything we do will be on Blair and not worrying about that next home game."

"We're gonna be fighting to get that next home game," Gross continued. "Blair has a lot of kids coming back that we played a couple years ago, so we know we'll have our hands full. I'm sure they're saying the same thing about us."

Schlager relished the thought of a road trip to Blair, especially with the idea of hosting Elkhorn South in the semifinals.

"We heard we may be playing Elkhorn South in the semifinals here, but we gotta focus on Blair first, that's for sure," he said. "We've got a big road trip coming up. We just gotta get ready for them and get that 'W' next week."

"It was a dominating start. We just came at them and slugged them. Boom boom boom. 21-0 and the game was over. From that point on, there were some ups and downs, we got a little sloppy because we lost some mental focus but it's hard to keep that when you're beating someone 27-0. Outside of some mental mistakes, I felt like we played really, really well in all phases of the game.""

"Our offensive line, we challenged them that they had to control the game. On the first play of the game, they gave Zach a hole like nobody's business. The next series they gave us unbelievable push. Dunncan and Cade just ran. You're as good as your offensive line takes you. That's when we were so dominant to build that 27-0 lead. That was huge momentum boost. We've got great backs. Zach, Gillen, Cappel and Dunncan did such as awesome job running the football, but it's such an easy job when the hole's there. It makes it a lot easier."

"We've played blair a couple years ago and it's somebody we don't see. Going to Blair's not fun, that's a long ways for us. It's not that much farther than going to Alliance or Scottsbluff. So we're excited."

"It's great. We came out strong and put up a lot of points in the first quarter. We heard we may be playing Elkhorn South in the semis, but we gotta focus on Blair first that's for sure. We've got a big road trip coming up, that's for sure."

"Our offensive line, man, I've gotta give credit to them. They got the (Northwest) defense off the ball, opened up holes, and we just made plays."