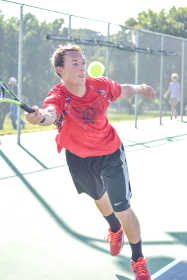 McCook senior Josiah Hegwood has total focus on this tennis ball while making another return during Thursday's final home dual of the season against Holdrege. Connie Jo Discoe/McCook Gazette.
Order this photo

McCOOK, Neb. -- Senior Day at the Bison Tennis Courts came down to the wire, but it would be a junior who provided the late-game heroics. Von Fritsche won his singles match, the final match of the day, 9-7 to give McCook the decisive point in a 5-4 win over Holdrege on Thursday.

"We had a successful home stand with this nail-biter win," said McCook head coach Matt Wiemers. "It came down to the last match of the day, where Von Fritsche pulled out the win."

In doubles play, the Bison won two out of three contests. Zion Moyer/Caden Bortner won their match 8-3, while Spencer Krysl/Sam Knoll came away with an 8-4 decision. Josiah Hegwood/Fritsche lost their doubles match 8-5.

In singles action, the Bison lost three-straight matches before coming back to win the final three. Krysl suffered an 8-4 defeat, Knoll dropped an 8-6 decision and Syd Wier lost 8-1.

The Bison, however, would have a strong finish to secure the team win. Hegwood won his contest 8-4, Zion Moyer took an 8-6 match and Fritsche had the late heroics with an 9-7 victory.

Thursday's win over Holdrege completed a successful season at the Bison Tennis Courts. McCook went 3-0 at home in dual play, with wins over Holdrege, Lexington and North Platte.

The varsity team will be off until Oct. 4, when the Bison travel to Ogallala for a meet with Alliance and Scottsbluff. The J.V. will be in action next Monday, with an invite at North Platte.