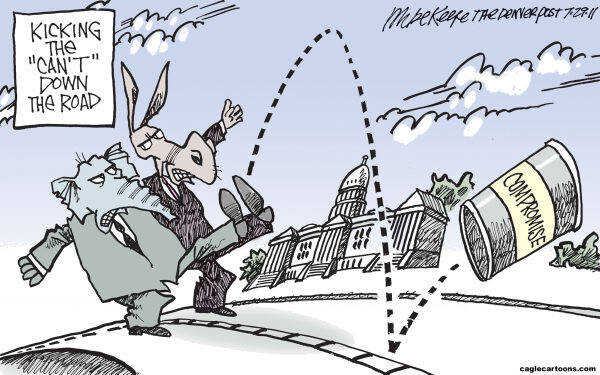 I got an email from Senator Mike Johanns last night and you did too if you are on his mailing list. It was his assessment of the work done by the Senate of extending the 2008 farm bill for a year and for compromise work accomplished to avoid automatic spending cuts and tax increases set to take effect today... the so called "fiscal cliff".

After reading Senator Johanns email, I came away with the fact that the "accomplishments" of last nights negotiations accomplished very little beyond kicking the proverbial can down the road YET AGAIN! The wording of the letter said it all to me. Instead of making needed changes, the Senators bullet list was filled with extensions and temporary fixes.

I wonder why these guys can come up with a BS solution at the last minute all the time, but can't seem to ever get the really important stuff worked out in a timely manner? The bums just funded the government for two months thinking they will beat their new deadline with real budgetary compromise. What do you think the odds of that actually happening are? What makes now any different than the last time they had a deadline?

My email response to Senator Johanns was "please quit, and ask your fellow Senators to do the same for the sake of the nation".