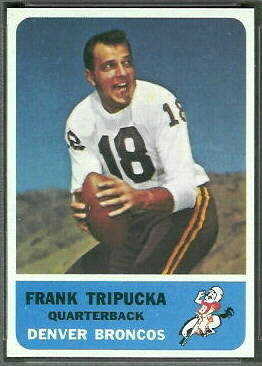 My Denver Bronco NFL football team made a big announcement yesterday. They signed arguably one of the best quarterbacks in NFL history as a free agent from the Indianapolis Colts... Peyton Manning.

Manning was released by the same Indianapolis Colts owner (Robert Irsay) that moved the team out of Baltimore. As one writer put it... "He kept the move secret until just after midnight when by cover of darkness on a cold snowy night he used Mayflower moving trucks to pack up the Colts offices, and relocate them in Indianapolis." The same nice guy that recently cut his 4 time Pro Bowl, Superbowl champion quarterback.

During the press conference in Denver to announce Mannings addition to the Broncos, Manning was shown holding up an orange Bronco #18 jersey that will be his number on the Bronco roster. Manning wore #18 at Indianapolis.

This blog isn't about Peyton Manning or the Baltimore/Indianapolis Colts. It's about the first guy to wear that Bronco #18, had the team retire his number, and graciously allowed his number to be un-retired so that Peyton Manning could use it... The Trip, Frank Tripucka.

Frank was an All American quarterback with the Notre Dame Fighting Irish in 1948. He was drafted by the Philadelphia Eagles with their #1 pick, but was traded to the Detroit Lions. He started there a year, then went to the NFL Chicago Cardinals for 3 years.

Frank was in the Canadian Football League from 1953 through 1959 as both player and coach. It should be of interest to sports fans that Franks last game was a winning loss. Under Canadian rules at the time, only 12 players from outside Canada could be on the roster. Frank (a coach at the time) being from the USA was ineligible to play officially, but the team lost it's three on-roster quarterbacks so management put Frank in anyway. Frank played that game pretty well, completing 17 of 29 passes and his team's "won" 37 to 30. Only problem the game was a loss because of the rule violation causing a forfeit.

In 1960 Frank joined the American Football League as a Denver assistant coach, but before the season could start, Frank was named the first starting quarterback of the newly created Denver Broncos... #18. Frank threw the very first touchdown pass in the history of the AFL. He was the first professional quarterback to throw for 3000 yards in a season (14 games). He was named to the AFL all star team in 1962, and Frank retired in 1963 with the Broncos retiring his number immediately.

Jump forward 49 years... the Broncos I'm sure had to get that #18 un-retired for Peyton Manning to wear. According to reports, Tripucka stated that he would allow #18 to be worn again by Peyton Manning if the Broncos were to sign him. Makes Frank a real team player in my mind to help out his former team. So much for the tradition of retiring a number since I thought once a number was retired, it stayed retired.

No sour grapes here. Just wonder why bother retiring a number in the first place when later it gets pulled out to satisfy a big name guy?