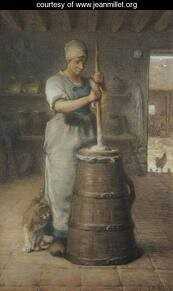 The Internet and cell phone industry has a term for folks that change from one service provider to another, always after the latest and greatest or the "deal of the day". Churning is what they call it, and from the way advertising sounds, it's really a big deal. One cell phone company for example advertises they will pay your current cell phone plan termination fee to get you to switch to their service.

Churning seems to be the opposite of loyalty when it comes to the relationship of a customer to a business. In my past, loyal customers were important to companies, but I'm not so sure it's that way anymore.

Talk to one of the major satellite TV providers for example and their spiel starts off with "thanks for being a loyal customer since before dirt was invented... How can I help you?".

Me: I see that you are advertising a special for new customers... Since I've been a loyal customer as you have pointed out since before dirt was invented, can I get that same special incentive to stay with you?

You can probably guess where this is going already...

Them: Thanks again Mr. Hoag for being a loyal customer since before dirt was invented. However, we offer loyal customer gifts throughout the year so that is why you can't have the new customer incentive.

Me: Some gifts, programming designed to get me to sign up for more service isn't my idea of a gift. Keep your gifts and give me the new customer sign up incentive.

Them: Sorry I can't do that Mr. Hoag... bla bla bla mumbo jumbo. Once again, thanks for being a loyal customer since before dirt was invented. I'll refer your concerns to our marketing department. Have a nice day.

So my bill will be about the same as I can get through the other guys service, so I haven't churned on my satellite yet, but I may still. At least they addressed my complaint to some degree... even if I'm not completely satisfied.

The satellite service distracted me from another issue I was having with another service provider, and once I focused my attention to that problem, I finally decided I'd had enough poor service.

I'd sent emails to the company I dropped about declining service, and received messages that a problem was found and corrected. The immediate issue may have been corrected, but the service slowly but continually degraded and the band-aid type repairs were insufficient. We finally had enough but when we called to terminate the service, it was like WHY WOULD YO DO THAT?? I know that they are aware of service issues brought up but have chosen to not take appropriate action, so they lost my business.

Mr Businessman, if your customers start to complain about service, you likely should pay close attention. Sooner or later most folks get tired of high prices, poor service, or both, and find somebody else to play with. I prefer to do business with the same folks that I have learned to trust, don't break that trust and I'll be a customer for life.