The Guy On A Stamp

Near the end of Charles Schulz life, a reporter asked the award winning "Peanuts" cartoon creator "Out of all the awards you have received over your glittering career, which one means the most to you?"

The Combat Infantry Badge is the U.S. Army combat service decoration awarded to those who personally fought in active ground combat any time after 6 December 1941. The award was created during World War II as recognition of the combat service and sacrifices of the infantrymen who would likely be wounded or killed in numbers disproportionate to those of soldiers from the Army's other service branches.

Schulz had a special appreciation for one of his fellow cartoonists... Bill Mauldin. For years, Schulz would send Mauldin the original Veterans Day Peanuts cartoon (Here is an example... Snoopy, Willy, and Joe) , and Mauldin finally got a chance to find out why. At a cartoonist convention, they ran into each other and Mauldin asked why? Schulz replied that he had been a machine gun squad sergeant with the 20th Armored Division in France and Germany in 1945. "That's all he needed to say," Mauldin was quoted as saying. He understood the rest.

During WWII, Bill Mauldin's cartoons appeared in the military Stars and Strips newpaper, and showed a sarcastic humor side of war that the combat troops could relate to. Not one to shy away from pointing a finger at the top brass, General Patton tried to get Mauldin censored as George thought the "humor" wasn't so funny. 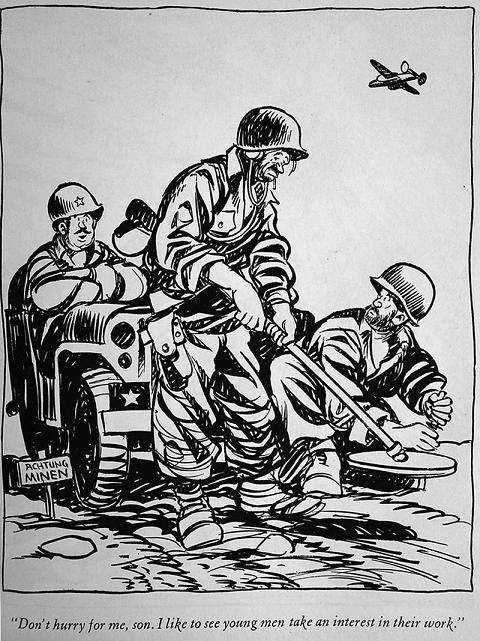 Unfortunately for Patton, Mauldin had a higher ranking fan... Eisenhower. Bill's characters Willy and Joe became famous, with Willie even adorning the cover of Time Magazine. Mauldin won two Pulitzer Prizes, the first in 1945 at age 23. His cartoons made him a hero to the common soldier, and GIs often credited him with helping them hang on though tough times.

Mauldin had quite the life. He ran unsuccessfully for congress, tried freelance writing, but cartooning is what we remember him for. The first Mauldin cartoon I recall seeing was in 1963. The day Kennedy was shot, Mauldin penned the following cartoon and it's one of his best in my opinion... 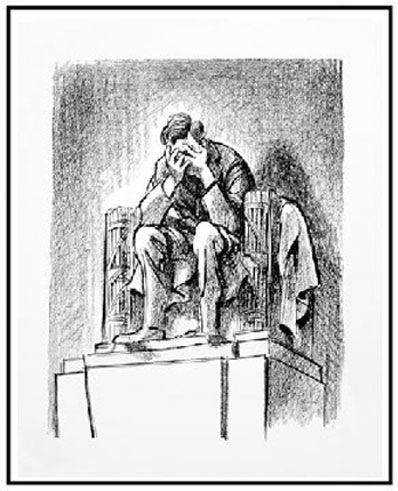 In his final years, Bill suffered a terrible scalding accident that left him in a nursing home. Somehow, word got out about Bill's condition and location and it started. Todd DePastino, in the first paragraph of his biography of Mauldin, described it:

"Almost every day in the summer and fall of 2002 they came to Park Superior nursing home in Newport Beach, California, to honor Army Sergeant, Technician Third Grade, Bill Mauldin. They came bearing relics of their youth: medals, insignia, photographs, and carefully folded newspaper clippings. Some wore old garrison caps. Others arrived resplendent in uniforms over a half century old. Almost all of them wept as they filed down the corridor like pilgrims fulfilling some long-neglected obligation."

One WWII vet put it this way... "You would have to be part of a combat infantry unit to appreciate what moments of relief Bill gave us. You had to be reading a soaking wet Stars and Stripes in a water-filled foxhole and then see one of his cartoons." 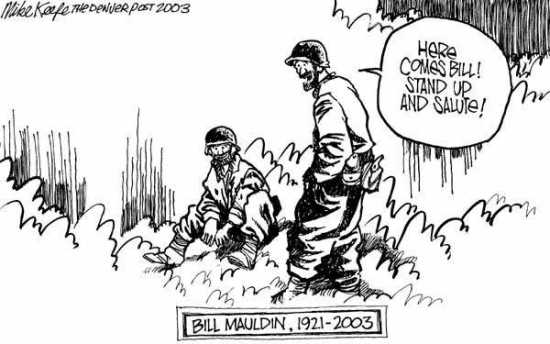 So what brings all the above to mind is what our US Post Office did. I should have been a stamp collector as I would have known sooner, but I received an email recently about the Bill Mauldin commemorative stamp and it got me thinking. I've seen many of Mauldin's cartoons over the years, and for Memorial Day, I thought a tribute to the guy that made life a little better for many of those whose gift we celebrate this weekend was in order.

Oh yes... I'd be remiss if I didn't include a picture of the stamp that remembers Bill Mauldin... 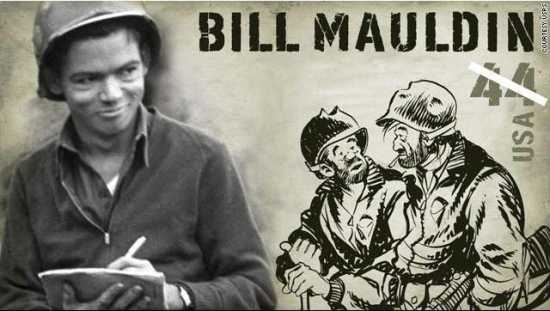 I'd like to thank the estate of Bill Mauldin and Mike Keefe for the use of the above cartoons. For more, I suggest...

Have a fun and safe Memorial Day weekend!