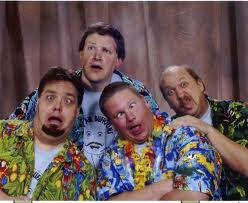 Buffoon - A clown; a jester: a court buffoon. 2. A person given to clowning and joking. 3. A ludicrous or bumbling person; a fool...

The TV channels seem to be loaded with dancing shows these days. Dancing With The Stars and Live To Dance are just two show titles that I'm aware of. I'm not much of a fan of reality TV competition shows such as these, but lots of people are apparently and I admit that I watch the promos for the shows. The way those dancers twirl, spin around, and seemingly float across the stage is amazing to me. If it was me, I'd be on the floor looking up, and my attempt to duplicate the dancers on TV would completely validate the definition of a buffoon.

Now you should know that I dance a lot better than I sing, which isn't saying much, but what brings the above to mind is the show that was put on last night by the Prairie Statesmen at the McCook Auditorium. I wish I could sing... but more on that later.

We were treated to a wonderful evening with the Prairie Statesmen singing group and The Music Man School Board Quartet, the barbershop singers that performed with McCook's production of "The Music Man" a couple weeks ago. Both groups nailed their presentation, but I have to say... I had tears in my eyes as the Prairie Statesmen sang Lee Greenwood's "God Bless The USA". After intermission, the "headliners" appeared.

The Hot Air Buffoons totally lived up to their name! What a HOOT! For those that didn't see the show, the curtain opened to 4 crash test dummies - really!... with the nicest voices I've ever heard from 4 singing guys together. The antics of the performers and the beauty of their voices together made for one of the most entertaining shows I've been to in many years.

Oh yes... back to why I wish I could sing. I learned last night that the Prairie Statesmen are in danger. The group has slowly been dwindling in numbers, and for some reason they can't seem to attract new members. The attrition that age seems to bring is hitting this group especially hard.

I understand that the group has gone out to schools trying to attract interest, but I guess nobody sings anymore? I can only speak for about a couple minutes before I start getting hoarse, and singing is really out for me, but this group could sure use YOUR participation! My understanding that the group is half its former self... without some new blood, the McCook area will likely loose this wonderful performing group.

I hope some of you readers out there will mosey on over to McCook on any Tuesday night. I understand that the Statesmen practice at 7:30PM downtown on George Norris Ave and all you have to do is listen to find them. You never know, you might just make some new friends and have the time of your life. Those guys sure look like their havin' fun!