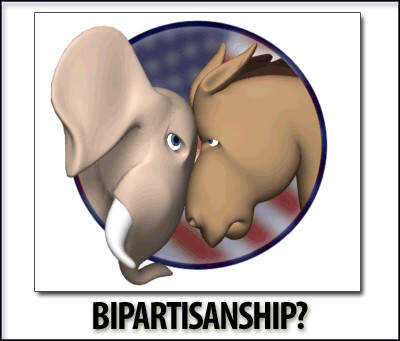 With the temporary absence of the Gazette's political bloggers, I offer the following to help fill the void some you may be feeling...

I found a couple of Internet articles about bipartisanship yesterday, and I hope you can take the time to read them and post your thoughts.

My take on bipartisanship is this... it's really a shame that the best ideas from both sides likely won't be incorporated to make something happen that apparently the majority of Americans want at least to some degree (I'm specifically talking about health care, but just about every contentious issue could be included in the discussion).

Because of the lack of bipartisanship, we may end up with laws that we hate pushed though by the majority party, when a compromise bill would be better. It seems that political gain is more important than the overall good of our country, and the only reason for pretending to be bipartisan is attracting as many of the large block of independent and moderate voters as possible for the next election.

It's beginning to seem more about party, than country on both sides of the political fence. As a good friend said a while back, there are too many Republicans and Democrats, and not enough Americans. He may be right.

More from this blogger · Brian Hoag
Comments
View 21 comments
Note: The nature of the Internet makes it impractical for our staff to review every comment. Please note that those who post comments on this website may do so using a screen name, which may or may not reflect a website user's actual name. Readers should be careful not to assign comments to real people who may have names similar to screen names. Refrain from obscenity in your comments, and to keep discussions civil, don't say anything in a way your grandmother would be ashamed to read.
Respond to this blog