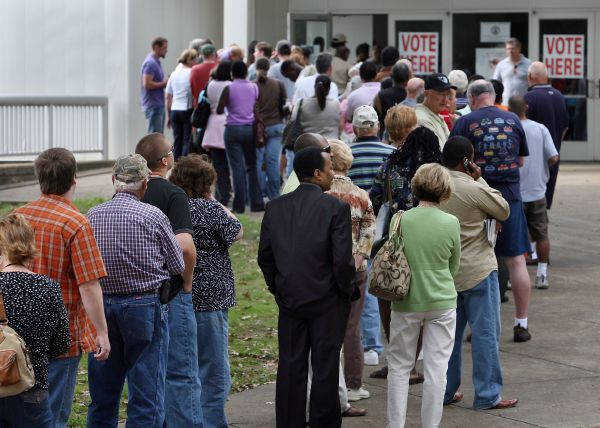 City Folk Have All The Fun?

A few years ago, John Travolta starred in a movie called "Michael". Michael it turned out was one of God's archangels, and the movie featured several memorable lines with one of my favorites being "I invented standing in line".

We've all seen people standing in lines on the news now and then, and have likely spent some time waiting in a line for whatever ourselves. The last presidential election showed pictures of hundreds of people waiting to cast their votes, new movies can have lines several blocks long, and even stores can have a line of folks waiting to get in for sales and the like.

On a recent road trip, we happened to have the opportunity to visit a membership warehouse store that opens earlier for certain members. It turns out that folks that opted for the business membership get the the opportunity to shop an hour earlier than the general members. The unfortunate part of this story is that the business members probably outnumber the general members.

We were with a business member when we arrived at the store about 5 minutes ahead of the scheduled opening time. There were about 10 or 15 people in line when we arrived, and since I hate standing in line, we waited until we noted the line moving after the doors were unlocked to exit the car and head for the store entrance.

YIKES! I am apparently not the only person that doesn't like Michael's standing in line invention. As we heading for the door, so did about 300 or so other folks intent on getting in early and avoiding the rush... yeah right! I've seen more organization and less pushing and shoving at a cattle pen that at the door to the membership warehouse, and as you well know by now, I'm no cow expert!

If there had been some super sale on an item perhaps the waiting line's aggressive behavior could be understood, but there was no big sale. It was just a bunch of city folk in a hurry to get their shopping done and cutting in line to get in faster was a common complaint as I heard several folks say... "I was here first".

City dwellers I come in contact with seem to have a very different set of priorities than me. Pushing and shoving to get into a store is pretty low on my list of things needing to get done expeditiously, but I have to admit that it's nice to have a set of rules to get the job done... even if the general population doesn't follow the rules now and then.

I guess standing in line is kinda like speed limits... following the rule seems to be only a suggestion unless someone is there to enforce the rule. It seems that common courtesy and general safety are not as important as we like to think when we speed down the highway or force our way in a line. Rules are made to be broken is a common phrase I've heard over the years, so go ahead and break the rules all you want... payback will not be required unless someone catches you and you painfully discover that breaking rules occasionally has consequences... at least in this lifetime.