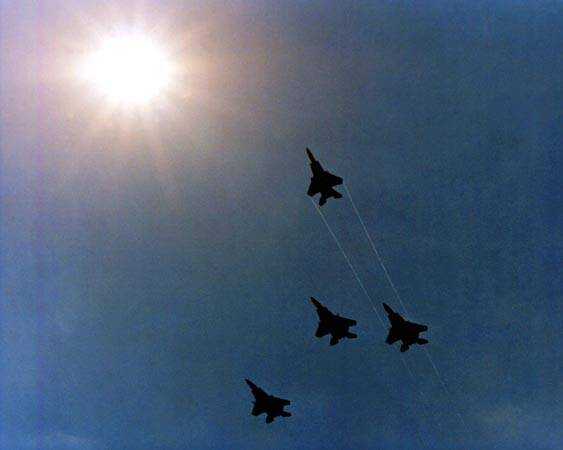 I find it rather odd how my mind thinks of things now and then. The "Miracle On The Hudson" aircraft crash the other day reminded me of a bad day in my families history. One of my cousins husband was a USAF pilot that was killed from a bird strike when the Turkey Buzzard penetrated the canopy. We understand he was killed instantly. Then yesterday, I read a piece in the news about how expensive the Presidential Inauguration is going to be, including military flyovers, and I remembered getting an email a couple years ago. I suppose the combination of bird strike and flyover is what jogged my memory, but I had to go searching for the original email and want to share it. It's a good reminder that unless we have all the facts, we probably shouldn't complain...

A letter to the Editor;

Question of the day for Luke Air Force Base: Whom do we thank for the morning air show?

Do the Tom Cruise-wannabes feel we need this wake-up call, or were they trying to impress the cashiers at Mervyns' early-bird special?

Any response would be appreciated.

The "wake-up call" witnessed the morning of June 15 was a formation of F-16 jets from Luke Air Force Base lining up for a memorial service in Sun City at the grave site for Air Force Capt. Jeremy Fresques, an officer assigned to Air Force Special Operations. Fresques gave his life in defense of our country while serving in Iraq.

It is unfortunate that at a time when our nation is at war someone would believe we have less than honorable and professional reasons for such a mission.

The commander of the fighter squadron was given the difficult duty of informing the family of Capt. Fresques on Memorial Day that the officer, a husband, son and Arizonan, had died in Iraq.

On behalf of the men and women at Luke Air Force Base, we continue to keep Jeremy and his family in our thoughts and prayers.

Regarding "A wake-up call from Luke's jets"

On June 15, at precisely 9:12 a.m., a perfectly timed four-ship of F-16s from the 63rd Fighter Squadron at Luke Air Force Base flew over the grave of Capt Jeremy Fresques.

Capt. Fresques was an Air Force officer who was previously stationed at Luke Air Force Base and was killed in Iraq on May 30, Memorial Day.

At 9 a.m. on June 15, his family and friends gathered at Sunland Memorial Park in Sun City to mourn the loss of a husband, son and friend.

Based on the letter writer's recount of the flyby, and because of the jet noise, I'm sure you didn't hear the 21-gun salute, the playing of taps, or my words to the widow and parents of Capt. Fresques as I gave them their son's flag on behalf of the president of the United States and all those veterans and servicemen and women who understand the sacrifices they have endured.

A four-ship flyby is a display of respect the Air Force pays to those who give their lives in defense of freedom. We are professional aviators and take our jobs seriously, and on June 15 what the letter writer witnessed was four officers lining up to pay their ultimate respects.

The letter writer asks, "Whom do we thank for the morning air show?"

The 56th Fighter Wing will call for you, and forward your thanks to the widow and parents of Capt. Fresques, and thank them for you, for it was in their honor that my pilots flew the most honorable formation of their lives.

To his credit, the original writer, wrote the following apology:

I read with increasing embarrassment and humility the response to my unfortunate letter to The Republic concerning an Air Force flyby ("A wake-up call from Luke's jets," Letters, June 23).

I had no idea of the significance of the flyby, and would never have insulted such a fine and respectful display had I known.

I have received many calls from the fine airmen who are serving or have served at Luke, and I have attempted to explain my side and apologized for any discomfort my letter has caused.

This was simply an uninformed citizen complaining about noise.

I have been made aware in both written and verbal communications of the four-ship flyby, and my heart goes out to each and every lost serviceman and woman in this war in which we are engaged.

I have been called un-American by an unknown caller and I feel that I must address that. I served in the U.S. Navy and am a Vietnam veteran. I love my country and respect the jobs that the service organizations are doing.