Thunder On The Prairie 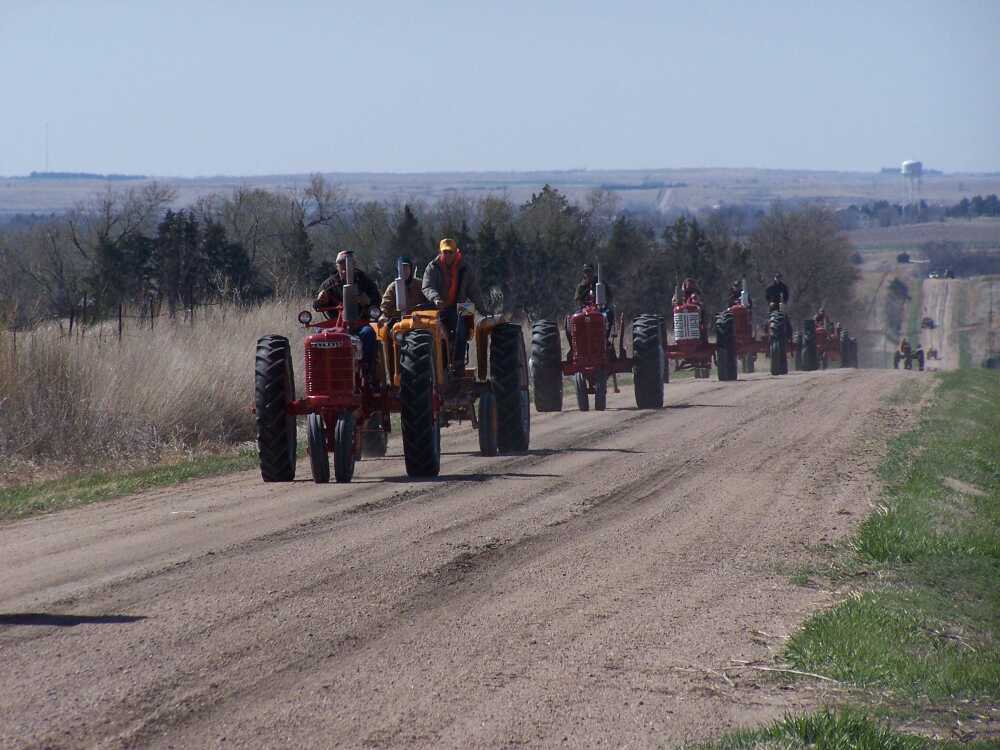 What a beautiful day yesterday was! Temperatures in the upper 70's with a light wind made for perfect weather to get some things done outside again around the farm. Our muddy road dried out, and not a day too soon as we sold Gozer yesterday, and the new owners had a good solid surface to get back to the asphalt for their trip home.

After I pulled the RV from behind the barn and was in the process of washing the windows for the new owners, I heard an unusual thundering sound. It's usually pretty quiet out here, so I've become accustomed to listening to distant farm equipment and close by birds, but this sound was something completely new, and sounded like it was only a 1/2 mile or less away getting louder and louder.

I strolled out to the road for a better view and immediately ran back to the house for my camera! What I was about to witness was the local tractor clubs parade! Now to me, this was cool! I've never lived on a parade route before, let alone been about the only witness to a parade for a 2 mile stretch. I'm sure glad I was home and didn't miss the show!

Those 20 old tractors make one heck of a rumble rolling up the road, and it's obvious a lot of time was put into restoring some of those old machines. I didn't get a close look unfortunately, but some appeared to be driven off the factory assembly line with fresh paint and rubber. One thing I noted was I don't recall seeing a green machine. There might have been one mixed in, but the majority were of Farmall, McCormick, and Minneapolis Moline manufacture.

I want to say a special thanks to bigsurmac for his response to my query about weed control recently. He offered some good advice that will be hard for me to follow in some areas of the farm(stead) as a lot of old hog sheds have been buried. I'm pretty sure that trying to move 6" of topsoil will uncover a lot more "treasure" that I don't want to deal with either. Maybe the weeds will be the lesser of evils around here. I have spoken to my farming neighbor a couple times about property management, and I offered him free use of some of the farm as it will get me out of the weed control business in about an acre area. Seems like a win/win situation, and I believe he intends to do just that.

Notes from the weed war zone... Beyond possible reinforcements taking control of a large area of the battlefield as noted above, the small assault mower was pressed into action. Use on desirable ornamental vegetation (yard grass) was accomplished, as well as an area with potential for explosive growth of undesirables. More mechanized equipment (riding mower) is expected any day now to back-up existing forces.